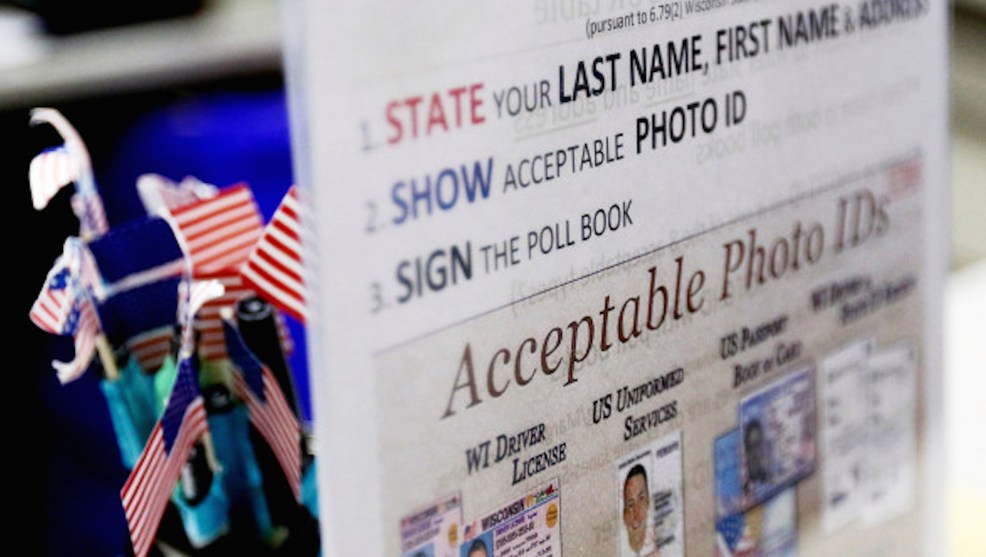 Rebecca Brinkman moved to Baraboo, Wisconsin, an hour north of Madison, from Ohio in the spring of 2016 for a job as a zookeeper. She worked from 7 a.m. to 7 p.m. on Election Day before rushing to her polling place.

In addition to her Ohio driver’s license, she brought a manila envelope stuffed with documents to confirm her identity, including her credit card, her Social Security card, her rental lease, and a paycheck. “I was very well organized,” she told me. But November 2016 was Wisconsin’s first major election with a strict voter ID law in effect, which required voters to present one of a handful of categories of government-issued photo ID. Brinkman couldn’t get a Wisconsin driver’s license in time because her birth certificate was in Ohio.

Even though Brinkman was already registered in Wisconsin and had other forms of ID, poll workers only allowed her to cast a provisional ballot. It was never counted. “I was very frustrated,” she said. “This past election was kind of a big one.” She described herself as “liberal” and said she didn’t vote for Donald Trump, who carried the state by just 22,000 votes.

A comprehensive study released today suggests how many missing votes can be attributed to the new law. Researchers at the University of Wisconsin-Madison surveyed registered voters who didn’t cast a 2016 ballot in the state’s two biggest counties—Milwaukee and Dane, which is home to Madison. More than 1 out of 10 nonvoters (11.2 percent) said they lacked acceptable voter ID and cited the law as a reason why they didn’t vote; 6.4 percent of respondents said the voter ID law was the “main reason” they didn’t vote.

The study’s lead author, University of Wisconsin political scientist Kenneth Mayer, says between roughly 9,000 and 23,000 registered voters in the reliably Democratic counties were deterred from voting by the ID law. Extrapolating statewide, he says the data suggests as many as 45,000 voters sat out the election, though he cautioned that it was difficult to produce an estimate from just two counties.*

“We have hard evidence there were tens of thousands of people who were unable to vote because of the voter ID law,” Mayer told me.

The study, which was funded by Dane County Clerk Scott McDonell, provides some of the firmest evidence yet that new restrictions on voting lead to voter disenfranchisement. It’s a strong rebuke to supporters of voter ID laws like Wisconsin Gov. Scott Walker, who has claimed that the notion the voter ID law reduced participation is a “load of crap.” (Wisconsin saw its lowest turnout since 2000, and there were 41,000 fewer voters in Milwaukee compared with 2012.)

After the study’s release, McDonell and Milwaukee County Clerk George Christenson joined together in calling for an immediate suspension of the law. “It is completely unacceptable that thousands of voters were deterred from exercising their sacred right to vote due to this law. Citizens’ basic belief in their democracy is seriously eroded when those in power target some for exclusion from self-government,” said McDonell.

Mayer and Michael DeCrescenzo, the University of Wisconsin Ph.D. candidate who co-authored the report, didn’t ask those surveyed who they would’ve voted for, so it’s impossible to know if these thousands of lost voters might’ve tipped the election, but other studies—like a 2014 one by the Government Accountability Office—have found that voter ID laws disproportionately reduced turnout among voters of color, young voters, and newly registered voters, who were more likely to support Democrats. “If you were to re-run the election over without the voter ID requirement, would the outcome have been different? Possibly,” Mayer said.

The study also found socioeconomic and racial disparities among those impacted by the new law. “The burdens of voter ID fell disproportionately on low-income and minority populations,” writes Mayer. More than 20 percent of registrants coming from homes with incomes less than $25,000 say they were kept from voting by the law; 8.3 percent of white voters surveyed were deterred, compared with 27.5 percent of African Americans.

The new study also suggests that the number of voters disenfranchised by the law is far greater than the number of fraud cases that it was designed to stop. In 2014, during a federal trial where Wisconsin failed to present a single case of voter impersonation that the law would have prevented, a federal judge found that 300,000 voters lacked the strict forms of ID required by the state.

“The number of people who were deterred from voting is many thousands of times greater than the number of cases of voter impersonation that are prevented by this law,” Mayer says.

*This article has been updated with further context on Mayer’s statewide extrapolation.