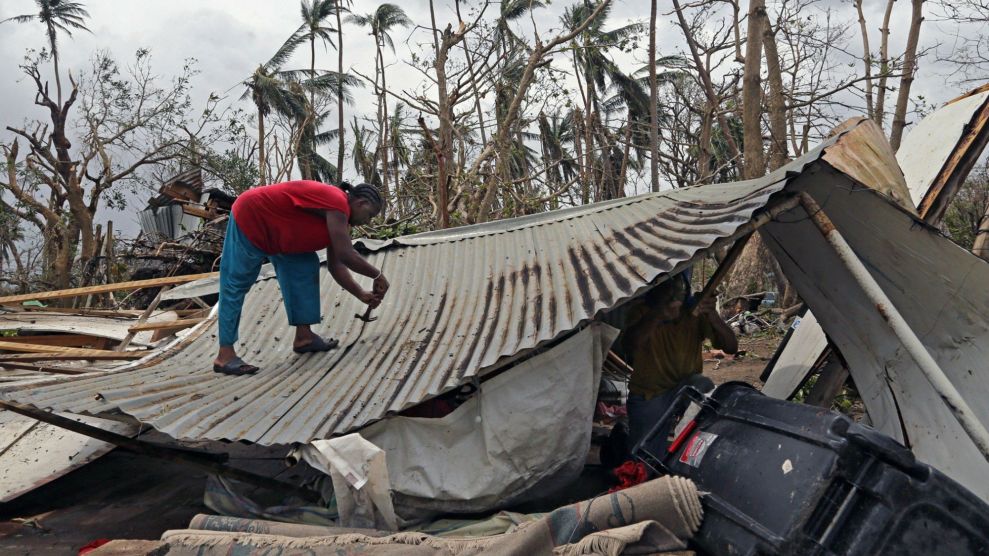 As Puerto Rican officials and the federal government continue to grapple with the massive devastation across Puerto Rico caused by Hurricane Maria, attention has turned away from the $73 billion debt crisis that is plaguing the island. But it’d be wrong to try and treat the two problems as distinct, says San Juan-based reporter Luis J. Valentín Ortiz. Working for Caribbean Business, he has been covering Puerto Rico’s financial crisis in detail for more than two years and knows that the two crises are inextricably linked—which makes fixing them both that much harder.

Sitting on a deck in the Convention Center of Puerto Rico—which has morphed into a command center for local and federal officials—I spoke with him about President Trump’s unhelpful tweets, the need for billions of dollars from Congress, and whether or not Puerto Rico’s government will be able to make its next payroll.

Mother Jones: How do you think Hurricane Maria is going to affect the fiscal crisis?

Luis J. Valentín Ortiz: I would say right now, speaking of revenues, Puerto Rico has [very little] economic activity going on on the island. Most of the businesses are still closed, you don’t have a sales tax revenue, you don’t have a lot of the bulk of the government revenue. That just presents a lot of problems. First of all, how are you going to fund the payroll [for government employees]? I believe that the government could actually pay the next one, but I don’t think they can actually pay for the one after that.

They said we have enough liquidity for the next few weeks, but after that, if they don’t receive anything, especially from the sales tax side, you don’t have [any money]. Cashflow was compromised even before Hurricane Maria.

And of course, you have to factor in all of the money that [the government now has] to spend on contractors. It’s either you don’t pay them, which probably hits your economy because those guys won’t have any money to spend. Or if you pay them, that will bring a lot of pressure [on the island’s budget] because that was money [the government] didn’t expect to have to spend.

MJ: People have said that the government of Puerto Rico is counting on an aid package from the US Congress to get through this disaster and that that’s the only path forward for a serious recovery.

LJVO: After Maria, for a few days it was all emergency management. But after three or four days, you saw the government start to push the message that Congress needs to help and do so immediately. The governor was pretty clear: Hey, we need not only waivers and federal assistance in terms of FEMA. We need a package, we need a billions-of-dollars package. Because if not, there’s no way that the government could pull through.

You could have [billions], but if you’re restricted in terms of the use, that could complicate it. The government has been very emphatic in saying that we need money, but we also need flexibility [on how to use the funds]. Let’s see how that plays with the [financial control] board [that has been monitoring the island’s budget]. You have to factor in how the board will play into overseeing the use of those funds and how they will be allocated. There’s a lot of questions out there that we don’t really have a lot of information on yet. Besides we don’t know if Congress will eventually approve a package.

MJ: And then there were the tweets from President Donald Trump about Puerto Rico’s infrastructure being destroyed and how, “sadly,” its debt to Wall Street would have to be “dealt with.” Some took that to mean he was saying, You’re not going to get out of paying your debt. Did you take it that way?

LJVO: When I read the tweet, I thought the same thing. He’s telling you, in other words, Hey, don’t think that [Maria’s] just going to wipe out your debt and we’re going to move forward. I don’t even know if that’s possible right now because you already have a bankruptcy process underway. I don’t know if it’s possible, unless creditors accept a 100 percent haircut.

This dates back to even the Obama administration. The federal government—Congress especially—has been very clear that Puerto Rico needs to pay its creditors. There has been some improvement. [The message] has gone from, you need to pay all your debt, to, maybe [Puerto Rico] needs some sort of relief.

MJ: Right. It’s not only the Trump tweet. This has been US federal government policy since the beginning, right?