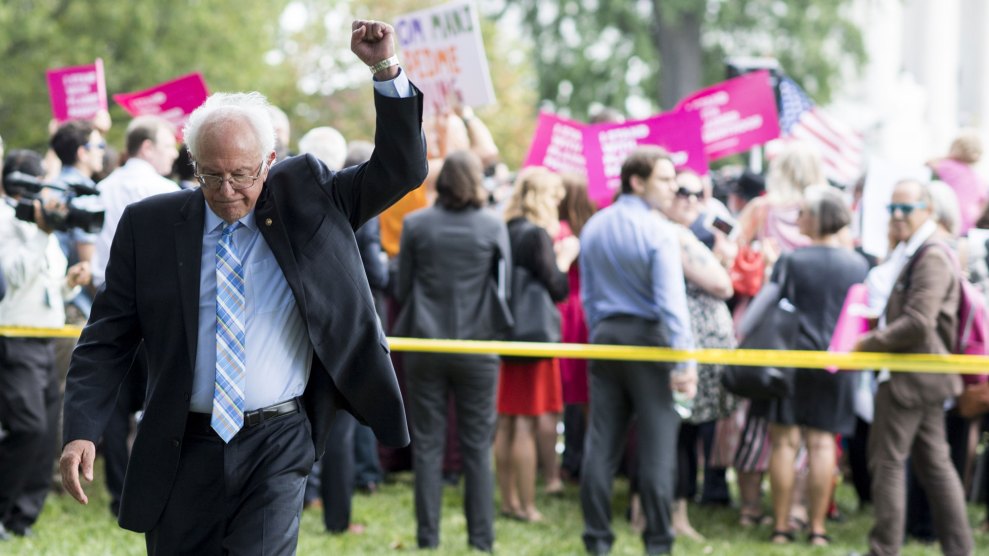 When CNN announced last week that it would hold a debate on health care between Republican Sens. Bill Cassidy and Lindsey Graham and progressive Sens. Bernie Sanders and Amy Klobuchar, the reaction in some Democratic circles was anxiety. “I’m not sure single payer vs Graham-Cassidy is the debate we want right now,” mused former Obama spokesman Tommy Vietor. With the Affordable Care Act once more on the ropes, the argument seemed to go, Sanders was choosing to advance his personal politics ahead of the priorities of the moment.

Those fears were unfounded. A Monday night cable news special was never going to be the make-or-break moment for health care reform, but more importantly, Sanders’ skeptics, and his Republican debating opponents, misunderstood his entire approach to health care reform—no one in the Senate has as much riding on Obamacare’s survival as he does.

Both Cassidy and Graham, who learned shortly before the broadcast that they were at least one vote shy of passage, hoped to frame the conversation as a choice between their bill and the Medicare-for-all proposal Sanders unveiled last week. For the Republicans, it was a contrast of the free-market vs. crippling Canadian bureaucracy. If America only knew Bernie Sanders is a socialist.

But Sanders needed all of 10 seconds to make clear that his purpose at the debate was different. “These gentlemen have on five occasions tried to repeal the Affordable Care Act, throw tens and tens of millions of Americans off of the health insurance they currently have, and make it impossible or very difficult for people with pre-existing conditions to get the health care that they can afford,” he said.

No one in the Senate has as much riding on Obamacare’s survival as he does.

It continued like this for an hour. Sanders and Klobuchar returned again and again to the Congressional Budget Office analysis that showed that Graham-Cassidy would throw millions off health insurance. In defense, Graham and Cassidy couldn’t really say what their bill would do, because the entire point of their proposal is to change Obamacare’s spending into block grants and let governors and state legislators decide for themselves how health funds should be spent. Sanders pointed out that governors and state legislators had all pretty much decided before Obamacare that people with pre-existing conditions were on their own. Graham didn’t have much to say about that. Instead, he and Cassidy frequently tried to make hay out of Sanders’ politics.

Sanders, of course, was happy to defend the principle of a single-payer system, but he never let that get in the way of the task on hand, nor did he reject the incrementalism the Senate sometimes lives and breathes by. Of course Medicare-for-all won’t be passing anytime soon, he said. But in the meantime, there were bipartisan fixes to made to Obamacare, and opportunity to act on prescription drug prices—an area of agreement, Sanders noted, between he and President Trump. They might even consider lowering the age of Medicare or offering a Medicaid or Medicare buy-in option—ideas his Democratic colleagues Brian Schatz of Hawaii and Chris Murphy of Connecticut are currently working on.

There is a vein of thinking right now that says that the best thing that could happen for the push for single-payer is for Obamacare to die. Disrupt the status quo by getting rid of the last major health-care overhaul and you clear the plate for a new and fresh health-care overhaul; it’s easier to build from scratch than to retrofit an old manse. In a sense, this is what Donald Trump has advocated at times on Twitter—let Obamacare wither on its own, and then start over.

As a strategy, this view is possibly correct. But Sanders does not subscribe to it. Instead he has set out to acquire political power for his idea by championing the ACA at every venture. No one in the caucus has put as much skin in the fight against repeal as the Vermont senator, who kicked off the party’s health-care resistance with a rally in Michigan a week before the inauguration and has been touring the country and in opposition pretty much non-stop. It is, for someone who has been marked as a revolutionary, an uncynical theory of change—the best way for him to build the coalition he needs is to be the man who saved Obamacare.