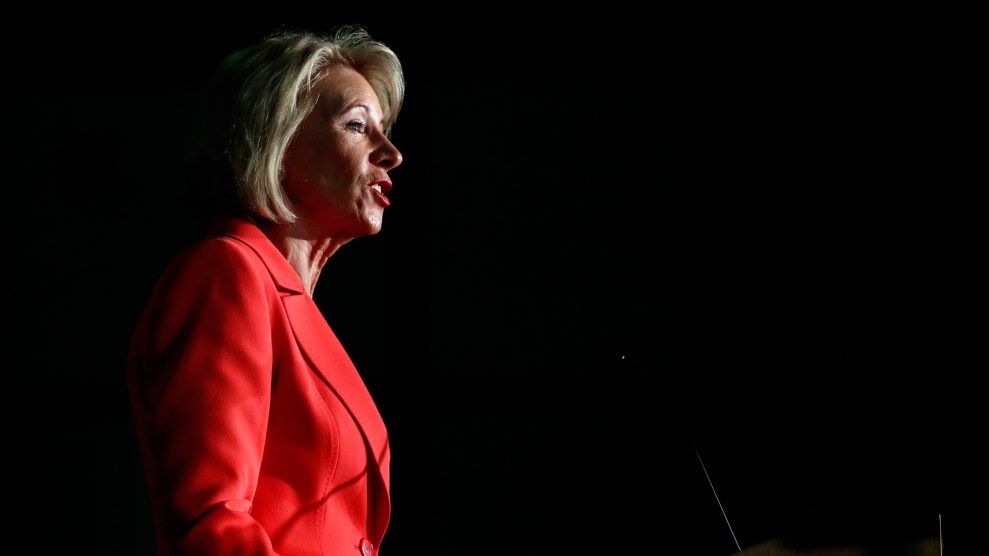 The Department of Education on Friday rescinded a set of requirements from the Obama administration and replaced them with new directives for how K-12 schools, colleges and universities should investigate sexual assault cases on campuses, arguing the old standards “created a system that lacked basic elements of due process and failed to ensure fundamental fairness.”

“This interim guidance will help schools as they work to combat sexual misconduct and will treat all students fairly,” Education Secretary Betsy DeVos said in a statement. “Schools must continue to confront these horrific crimes and behaviors head-on. There will be no more sweeping them under the rug. But the process also must be fair and impartial, giving everyone more confidence in its outcomes.”

The department released a question-and-answer document intended to serve as a guide for schools. Unlike the previous guidance, Friday’s directive could give accused students more protections against sexual misconduct claims. It leaves it up to colleges and universities to rely on the preponderance of evidence standard, or use a higher clear and convincing evidence one, noting that the standard used “should be consistent with the standard the school applies in other student misconduct cases.” It also noted that processes, such as the right to an attorney present or cross-examination, available for one party in a sexual misconduct case “should be made equally available to the other party.” Under this policy, schools can choose either to allow appeals from both parties or from accused students.

The latest directive also allows schools to engage in an informal resolution, such as mediation, to a Title IX complaint after an investigation has been opened and the parties have agreed to enter a voluntary resolution—a departure from the 2011 guidance that noted mediation could be used for some sexual harassment complaints but were “not appropriate even on a voluntary basis” for sexual assault cases.

The policy from 2011 directed college and university officials to combat sexual misconduct under Title IX or face the potential loss of federal funding if they failed to do so. It also required colleges and universities to lower the burden of proof in campus disciplinary procedures to a “preponderance of evidence” standard. Previously, disciplinary action only occurred when the infraction reached the legal standard for a criminal proceeding.

Critics of the previous directive argued the Department of Education had overstepped its authority with policies that were too far-reaching and ones that offered inadequate protection for the rights of the accused.

The Trump administration has signaled in recent months that it intended to rollback the Obama-era guidance. In February, DeVos hosted a “listening session” with sexual assault survivors, college representatives, and students accused of alleged sexual misconduct, which included representatives from men’s rights organizations. Ahead of that meeting, Candice Jackson, the acting head of the Education Department’s civil rights division, told the New York Times that 90 percent of sexual assault accusations “fall into the category of ‘we were both drunk,’ ‘we broke up, and six months later I found myself under a Title IX investigation because she just decided that our last sleeping together was not quite right.'” Jackson apologized for her “flippant” remarks in a statement to the Associated Press, adding, “All sexual harassment and sexual assault must be taken seriously.”

Following the February meeting, DeVos indicated that the current process for adjudicating sexual assaults “has not worked in too many ways.”

DeVos received backlash for inviting representatives from the National Coalition for Men Carolinas, a men’s rights group, to the listening sessions. Activists and politicians protested outside the Department of Education to oppose the potential rollback in protections for sexual assault survivors.

In a speech to law students at George Mason University in Virginia earlier this month, DeVos further condemned the rules set in the 2011 guidance, calling the current system in place at college campuses “shameful” and “wholly un-American.”

“The truth is that the system established by the prior administration has failed too many students,” DeVos said. “Survivors, victims of a lack of due process, and campus administrators have all told me that the current approach does a disservice to everyone involved.”

The long-anticipated decision strikes a blow to sexual assault victims, advocates say. “This interim guidance will have a devastating impact on students and schools,” says Fatima Goss Graves, president and CEO of the National Women’s Law Center. “It will discourage students from reporting assaults, create uncertainty for schools on how to follow the law, and make campuses less safe. This misguided directive is a huge step back to a time when sexual assault was a secret that was swept under the rug.”

The Department of Education noted in a press release that the interim guidance is only an interim step before the formal rulemaking process proceeds, which will factor in comments from stakeholders and the public. “The era of rule by letter is over,” DeVos said in a statement. “The Department of Education will follow the proper legal procedures to craft a new Title IX regulation that better serves students and schools.”