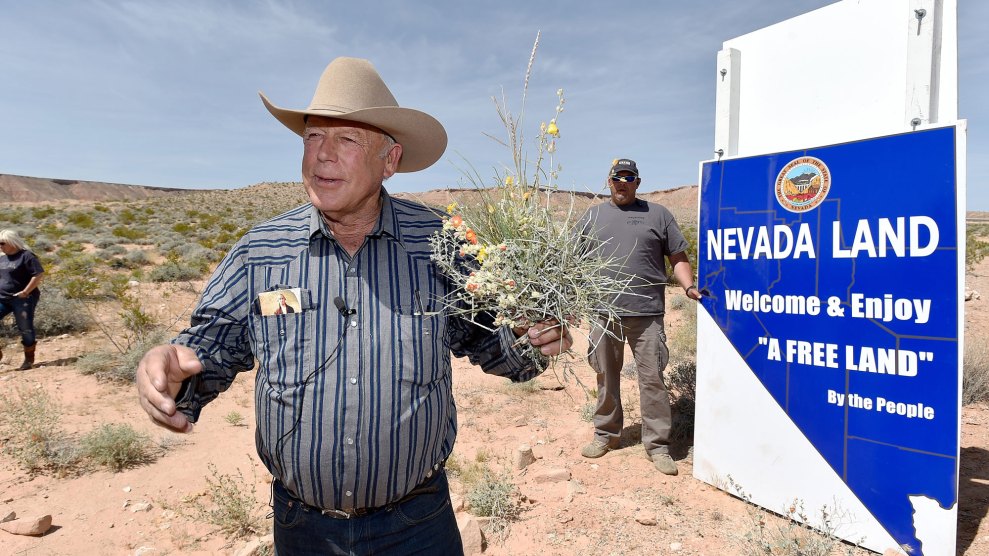 Rancher Cliven Bundy celebrating the one-year anniversary of the armed standoff with the Bureau of Land Management. David Becker/ZUMA Wire

Nevada rancher Cliven Bundy is slated to go on trial next month on federal charges that he conspired to lead an armed assault on federal law enforcement officials at his ranch in 2014. Officials from the Bureau of Land Management had attempted to remove Bundy’s cattle, which had been illegally grazing on federal land for a good 20 years. Bundy owed more than $1 million in fines and unpaid grazing fees, and was in violation of two different federal court orders. When BLM officers arrived to round up the cows, they were greeted by more than 1,000 armed protesters and militia members who took up sniper positions and eventually forced the BLM to call off the operation lest it turn into a blood bath.

In a court filing this week, Bundy’s lawyer, Bret Whipple, made a rather extraordinary argument: that this armed insurrection at the Bundy ranch was no different from the Selma civil rights march in 1965. He also notes that like Bundy, Martin Luther King Jr. “openly violated a federal court injunction.” Far from menacing the BLM officers with what the government calls a “massive assault,” Bundy and his co-conspirators were simply following the “pattern of political demonstrations throughout American history,” says Whipple. He suggests that the BLM was acting an awful lot like George Wallace, the Alabama governor who set the police on the (unarmed) Selma marchers.

Whipple argues that the Bundy supporters who moved on the BLM officers simply followed in MLK’s footsteps. He writes:

[T]he history of American political protests and civil rights marches is replete with examples of protesters who were armed or who defied government authorities by entering government facilities, ‘advancing forward,’ refusing to disperse or occupying government-controlled spaces.

Referring to King’s Letter From a Birmingham Jail, Whipple quotes a law review article saying that King’s goal was “to create such a crisis and foster such a tension that a community which has consistently refused to negotiate is forced to confront the issue.”

Comparing the armed militia groups at the Bundy ranch to civil rights marchers in Selma is an unusual argument on behalf of someone who was captured on video suggesting that “the Negro” might be better off in slavery picking cotton. After the standoff concluded, Bundy held court before reporters in 2014 and talked about driving past a public housing project in Las Vegas. He said:

And because they were basically on government subsidy, so now what do they do? They abort their young children, they put their young men in jail, because they never learned how to pick cotton. And I’ve often wondered, are they better off as slaves, picking cotton and having a family life and doing things, or are they better off under government subsidy? They didn’t get no more freedom. They got less freedom.

The recent court filing isn’t the first time Bundy has compared his struggle to illegally graze cows on federal land to the civil rights movement. In 2014, not long after the video of his racist comments emerged, Bundy issued a press statement suggesting that he was “trying to keep Martin Luther King Jr.’s dream alive.” He said:

The BLM, the IRS, the NSA–all of the federal agencies are destroying our freedom. I am standing up against their bad and unconstitutional laws, just like Rosa Parks did when she refused to sit in the back of the bus. She started a revolution in America, the civil rights movement, which freed the black people from much of the oppression they were suffering…I am doing the same thing Rosa Parks did—I am standing up against bad laws which dehumanize us and destroy our freedom.

Bundy’s latest attempt to transform himself into a civil rights activist came in response to a motion from prosecutors who are seeking to prevent him and his co-defendants from turning the criminal trial into a three-ring circus. Prosecutors have asked the judge to bar Bundy from introducing irrelevant evidence or making arguments from the anti-government sovereign citizen movement. Bundy claims not to recognize the US government at all and has said that his ranch is solely part of the “sovereign state of Nevada.” He believes the BLM and the federal courts have no jurisdiction over him or his ranch.

Because of this, Bundy has been tussling with federal prosecutors over whether he can make defense arguments that prosecutors say are nothing but a call for jury nullification—the practice of disregarding or overruling the law in issuing a verdict. Bundy has argued in a filing that he and his supporters can only defend themselves if they’re allowed to present evidence that they were acting in self-defense when they took up arms against the BLM.

Stating that Bundy’s beliefs are “divorced from reality,” the government has asked the judge to prevent Bundy and his co-defendants from making such an argument or suggesting that “natural law” allows the use of force against law enforcement in defense of property rights. The government has tried some of the Bundy ranch defendants twice before and failed to win convictions against them. In those trials, US District Judge Gloria Navarro banned defendants Eric Parker, Ricky Lovelien, Steven Stewart, and Scott Drexler from making such arguments. She ordered Parker off the stand during his testimony in one trial because he violated her order not to raise these issues.

It didn’t help. The two juries apparently believed the Bundys and their supporters are, in fact, persecuted political protesters like the Selma marchers, and didn’t return any guilty verdicts against Parker and three other defendants. The government will try Parker and Drexler for the third time, along with Bundy, in October.