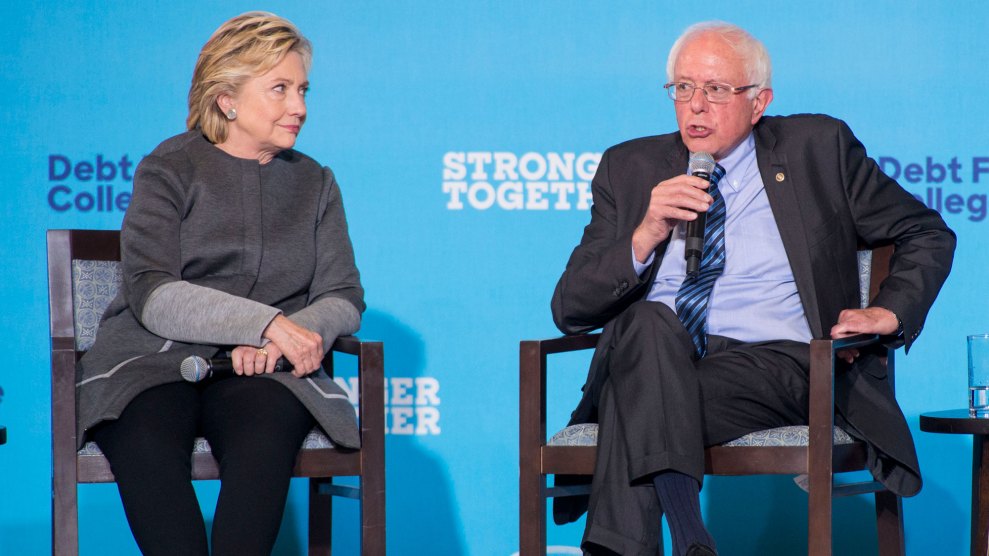 If we have learned one thing in the 10 months since the presidential election, it’s that the 2016 campaign will never leave us. It is burned into our subconscious like the eclipse is burned onto Donald Trump’s eyes. It is Keith Richards. It is the scar you got when you were nine.

But in key ways, the Democratic thinking about what exactly happened last year is slowly evolving, and to see how, you don’t need to look any further than two headline-grabbing events this week. On Tuesday, Hillary Clinton released What Happened, an aptly titled memoir about why she ran for president and who and what screwed it up. (In no particular order: the media, the voters, Bernie Sanders, Donald Trump, James Comey, and Hillary Clinton.)

Then on Wednesday, Sanders introduced his much-hyped bill to replace the nation’s private health insurance system with universal Medicare.

The 76-year-old Sanders, an afterthought for decades, has turned his biggest idea into a de facto litmus test for the Democratic Party’s next generation of leaders.

Short of a miracle, the Senate isn’t going to do anything about Sanders’ proposal until at least 2021—the next time Democrats have a chance to control the White House and Congress. But the story of Sanders’ bill is in its co-sponsors. He has 16 Democrats so far, and they include many of the party’s possible 2020 contenders. Sens. Kamala Harris (Calif.), Cory Booker (N.J.), Kirsten Gillibrand (N.Y.), Al Franken (Minn.), and Elizabeth Warren (Mass.) are all on board. So are Tammy Baldwin (Wis.), Brian Schatz (Hawaii), Richard Blumenthal (Conn.), Mazie Hirono (Hawaii), Jeff Merkley (Ore.), Ed Markey (Mass.), and Sheldon Whitehouse (R.I).

Others are in wait-and-see mode. Even Joe Manchin, the conservative Democratic senator from West Virginia, signaled on Tuesday that he thought the idea was at least worth a look. Hardly anyone noticed when Rep. John Conyers (D-Mich.) introduced a Medicare-for-all bill in every Congress since 2003, but Sanders’ legislation is a major media event for good reason: It represents an ideological breakthrough. The 76-year-old Sanders, an afterthought for decades, has turned his biggest idea into a de facto litmus test for the Democratic Party’s next generation of leaders.

It may seem like these events—Clinton’s high-profile release of her book and Sanders’ introduction of his single-payer bill—are in conflict, with one forcing the party to relive (if not, relitigate) the past, while the other leans hard into the future. But together they reflect something closer to a consensus about what happened last year and where the party should go next.

Clinton can be funny or earnest, particularly when sharing details about the parts of the campaign the cameras missed. In the book, she describes staffers fighting over Belizean hot sauce and counting the calories in Pepperidge Farm goldfish. We learn more about her first meeting with what would become known as the “Mothers of the Movement“—black women who lost loved ones to police or gun violence—and the anxious awkwardness of her pre-campaign huddle with Warren, whom she considered a formidable potential primary challenger. She devotes pages upon pages to explaining—and re-explaining—her email scandal and her complaints about the New York Times’ never-ending coverage of the controversy.

“Democrats should reevaluate a lot of our assumptions about which policies are politically viable.”

But when it comes to the political fights of today and tomorrow, the most interesting portions of the book concern Sanders. Much has been made about Clinton’s frustrations with the Vermont senator, who turned what was expected to be an easy walk for her to the nomination into a protracted struggle that culminated in protests at the convention. In What Happened, she thanks Sanders for not making an issue of her “damn emails” (as he put it during one debate) and for campaigning on her behalf during the general election. She even offers token praise for his disciplined commitment to pushing the party toward the left. But mostly she complains that Sanders—”not even a Democrat”—is filled with a lot of hot air.

In one widely noted section, Clinton hammers her primary opponent for peddling what she considers to be unrealistic promises:

He didn’t seem to mind if his math didn’t add up or if his plans had no prayer of passing Congress and becoming law. For Bernie, policy was about inspiring a mass movement and forcing a conversation about the Democratic Party’s values and priorities. By that standard, I would say he succeeded. But it worried me. I’ve always believed that it’s dangerous to make big promises if you have no idea how you’re going to keep them. When you don’t deliver, it will make people even more cynical about government.

No matter how bold and progressive my policy proposals were—and they were significantly bolder and more progressive than anything President Obama or I had proposed in 2008—Bernie would come out with something even bigger, loftier, and leftier, regardless of whether it was realistic or not. That left me to play the unenviable role of spoilsport schoolmarm, pointing out that there was no way Bernie could keep his promises or deliver real results.

As Clinton details in the book, she hails from a different school. Her Washington education came in the political fights of the 1990s, as a much different Democratic Party operating on a much different political landscape haggled with Republicans on issues such as welfare reform, crime, and, yes, health care. She was scarred by those fights. She believed in building fortresses of policy papers and hunkering down for a scorched-earth struggle of details and tactics. This view was reinforced by how she saw the Obama years, the achievements of which she desperately wanted to protect. Progressive policy change comes in a painstaking and incremental fashion, and you shouldn’t pretend otherwise. Verified facts and realistic plans counted. Really, they did. This was the Clinton who announced at the start of one general election debate that her staff would be fact-checking Trump in real time.

Of course, this was a mistaken assumption. Candidates with the right polish or schtick are often able to skate past the fact-checkers, or persuasively argue against moderation and compromise. In the end, that didn’t work for Sanders. But Donald Trump won. Taking this in, Clinton doesn’t exactly abandon her caution and eyes-on-the-details approach to politics. But she does reckon with the ideological and emotional struggle her party still finds itself in. “In my more introspective moments, I do recognize that my campaign in 2016 lacked the sense of urgency and passion that I remember from ‘92,” she writes. Shortly after noting that, she gets to the heart of the matter:

Democrats should reevaluate a lot of our assumptions about which policies are politically viable. These trends make universal programs even more appealing than we previously thought. I mean programs like Social Security and Medicare, which benefit every American, as opposed to Medicaid, food stamps, and other initiatives targeted to the poor. Targeted programs may be more efficient and progressive, and that’s why during the primaries I criticized Bernie’s “free college for all” plan as providing wasteful taxpayer giveaways to rich kids. But it’s precisely because they don’t benefit everyone that targeted programs are so easily stigmatized and demagogued.

She continues, “The conclusion I reach from this is that Democrats should redouble our efforts to develop bold, creative ideas that offer broad-based benefits for the whole country.”

Ding ding ding! Bernie couldn’t have said it better himself. This line of thinking helps to explain why a majority of the House Democratic caucus has signed onto Conyers’ single-payer bill, and why Democrats in a hurry stood smiling behind Sanders at his Wednesday press conference.

Still, Clinton isn’t fully at peace with the idea of shooting for the moon, and she’ll probably never be; it’s not in her nature. When she was asked by former Obama speechwriter Jon Favreau about Sanders’ Medicare-for-all push on Pod Save America, she couldn’t resist a dose of cold water.

“In terms of a political statement, to say, ‘We’ve got to get to universal health care, and maybe we should consider some kind of single-payer besides Medicare, which is single-payer, and, Medicaid, which is largely single-payer,’ we need to be looking hard at this,” she said. “But I think that the more likely outcome, after we try to raise the attention of the electorate on what we could achieve, is the continuing struggle to expand health care. I said we need a public option. I was very clear about that. So I don’t have any criticism whatsoever in staking a big claim on where we need to end up, but…let’s be realistic about how we’re gonna get to where we need to be.”

So there you have it: Clinton remains torn between passion and practicality. And this is likely to be a defining tension within intra-Democratic debates for the next three years, if not forever. But Clinton ultimately acknowledges one of the fundamental appeals of both Sanders and Trump: “It’s easy to ridicule ideas that ‘fit on a bumper sticker,’ but there’s a reason campaigns use bumper stickers: they work.”