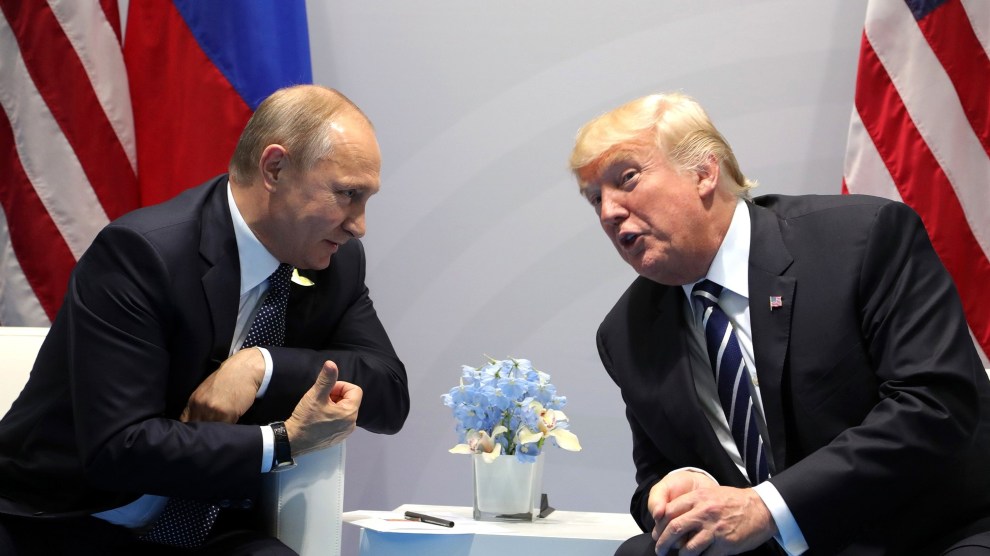 It’s been nearly a year since the US intelligence community publicly announced its determination that the Russian government took covert actions to sway the 2016 US election. We now know that Russia did so in part by buying Facebook ads and weaponizing bots, trolls, and other social media tools created by US tech giants. But there is still much that eludes the public about these attacks, as New York Times media columnist Jim Rutenberg pointed out on Monday: We don’t know what these Facebook ads looked like, we don’t know who they were targeting, and we don’t know how many millions of Americans may have been exposed to them. As the Washington Post reported, congressional investigators “have grown increasingly concerned that Facebook is withholding key information that could illuminate the shape and extent of a Russian propaganda campaign.”

We do know an elaborate plan for influencing the election reportedly was drawn up in 2016 by the Russian Institute for Strategic Studies, a think tank controlled by the Kremlin, according to reporting by Reuters. One document “recommended the Kremlin launch a propaganda campaign on social media and Russian state-backed global news outlets to encourage U.S. voters to elect a president who would take a softer line toward Russia than the administration of then-President Barack Obama,” according to seven US officials cited.

Another document that came from that Russian think tank last October, according to Reuters, “warned that Democratic presidential candidate Hillary Clinton was likely to win the election. For that reason, it argued, it was better for Russia to end its pro-Trump propaganda and instead intensify its messaging about voter fraud to undermine the U.S. electoral system’s legitimacy and damage Clinton’s reputation in an effort to undermine her presidency.”

There are at least four ways the Russians followed that blueprint for a broad attack that only now is beginning to come into greater focus for the American public.

As reported earlier this month in the New York Times, Facebook has disclosed that “a shadowy Russian company linked to the Kremlin” bought some 3,000 ads, using 470 fake accounts, at a cost of more than $100,000. Facebook said it has shut down the fake accounts and acknowledged that these were “divisive ads on hot-button [social] issues” such as race, gay rights, gun control, and immigration, according to a post on Facebook by Alex Stamos, the company’s chief security officer. The ads ran from June 2015 until May 2017 and echoed themes favorable to presidential candidate Donald Trump.

Throughout the election season, false and misleading articles were posted on Russian media sites and amplified through social media in an effort that former FBI agent Clint Watts has described as an updated form of the classic Soviet “active measures” technique to plant false information and undermine democracy. As Mother Jones has previously reported, Trump and his associates at times during the campaign picked up these false news stories and quoted them.

As Watts described to congressional investigators, the Kremlin used armies of Twitter bots to spread fake news using sock-puppet accounts that appeared to be individuals such as swing-voter Republicans in the heartland. The idea, Watts said, was for Americans to “see somebody and they look exactly like you, even down to the pictures.”

“Russia’s increasingly sophisticated propaganda machinery,” the Washington Post reported, “including thousands of botnets, teams of paid human ‘trolls,’ and networks of websites and social-media accounts—echoed and amplified right-wing sites across the Internet as they portrayed Clinton as a criminal hiding potentially fatal health problems and preparing to hand control of the nation to a shadowy cabal of global financiers. The effort also sought to heighten the appearance of international tensions and promote fear of looming hostilities with nuclear-armed Russia.”

Senate intelligence committee leaders have received reports, according to the Huffington Post, that Russia hired at least 1,000 trolls to spread fake news stories to hurt Democratic candidate Hillary Clinton during the presidential election. According to Sen. Mark Warner (D-Va.), these efforts apparently focused on “swing states in an attempt to influence votes there—Wisconsin, Michigan and Pennsylvania—where people were reading during the waning days of the election that ‘Clinton is sick,’ or ‘Clinton is taking money from whoever for some source’…fake news.'”

The margin of victory for Trump in all three states combined was fewer than 80,000 votes.

Watts and other national security experts created the Hamilton 68 dashboard this summer to track Russia-linked influence networks that continue to operate on Twitter.

The Daily Beast has reported “that Russian operatives hiding behind false identities used Facebook’s event-management tool to remotely organize and promote political protests in the U.S., including an August 2016 anti-immigrant, anti-Muslim rally in Idaho.” A Facebook spokesperson confirmed to the Daily Beast recently that several events were shut down and had been promoted with paid ads.

The Daily Beast added that these “Facebook events—one of which echoed Islamophobic conspiracy theories pushed by pro-Trump media outlets—are the first indication that the Kremlin’s attempts to shape America’s political discourse moved beyond fake news and led unwitting Americans into specific real-life action.”

While Facebook hasn’t publicized many specifics about the Russian political ad efforts, the Wall Street Journal reports that special counsel Robert Mueller has copies of the ads and information about the accounts that purchased them, as well as about the targeting criteria they used.

Meanwhile, the Trump campaign was known for its extensive use of Facebook in 2016—both for its use of the social network’s marketing tools and for its partnership with Cambridge Analytica, a firm controlled by major Trump donor Robert Mercer that specializes in “psychological” data mining from Facebook.

It remains unclear whether the Trump campaign efforts had any connection with the Russian efforts. But in reviewing how social media figured into the 2016 campaign in general, a recent piece in the New York Review of Books argued persuasively that, “Donald Trump is our first Facebook president.”