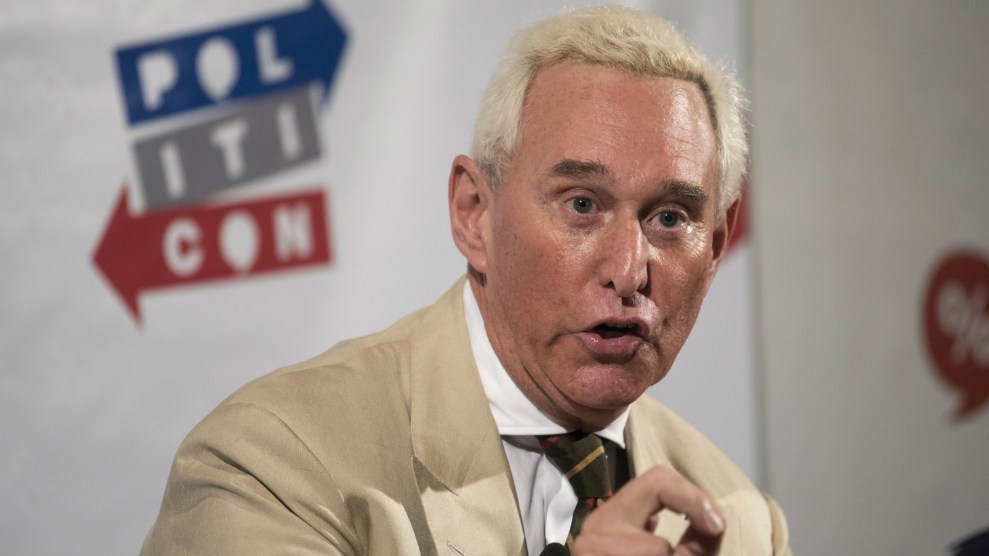 Roger Stone, the longtime Trump adviser suspected of colluding with Russian proxies during the 2016 election, came out swinging Monday night ahead his closed-door testimony before the House Intelligence Committee Tuesday morning.

“Please do not continue to perpetuate falsehoods here today,” Stone instructs the panel at the conclusion of his 3,200-word prepared statement, released Monday evening—a remarkably confrontational tone for a witness to take before a congressional committee.

A notorious self-promoter who spent most the 2016 campaign as an informal counselor to Trump, Stone says his “reputation and experience as a partisan warrior” makes him “suitable scapegoat” for those who suspect the Trump campaign coordinated with Russia.

The statement ultimately contains little new information. But it doubles down on Stone’s combative stance, rebutting statements about him by critics ranging from Democrats on the House Intelligence Committee and Hillary Clinton to Sen. John McCain (R-Ariz.), the intelligence community, and the media.

It’s important to remember, though, that Stone faces suspicion almost entirely because of his own claims. The longtime Republican strategist bragged in the summer of 2016 that he had communicated with WikiLeaks founder Julian Assange, and issued a series of tweets accurately predicting WikiLeaks would release material aimed at harming Hillary Clinton in October. Stone also tweeted in August 2016 that Clinton’s campaign chairman, John Podesta, would soon face his “time in the barrel”—a statement that seemingly anticipated WikiLeaks’ release of Podesta’s hacked emails in October. Stone has furthermore acknowledged contacts with Guccifer 2.0, an online persona that US intelligence agencies say was a front for Russian intelligence agents who passed hacked emails from the Democratic National Committee and the Clinton campaign to WikiLeaks.

“His significance starts and ends with the question as to whether he worked with Russians while they were interfering in our election,” Rep. Eric Swalwell (D-Calif.), a member of the House Intelligence Committee, told Mother Jones Monday. “He demonstrated at least a willingness to work with the Russians. Was this just willingness or was this an active working relationship? That is still unresolved.”

In his statement, Stone says he never claimed direct contact with Assange, rather that he spoke with a journalist, who he does not name, who interviewed Assange. Stone says those conversations informed his tweets. (Stone told Yahoo News Monday that he will refuse to identify the journalist if asked by House Intelligence Committee members.) He also claims his tweet about Podesta came after he had read opposition research outlining business connections Podesta had in Ukraine. Stone says he believed that the Clinton campaign chief would face scrutiny similar to that faced by former Trump campaign director Paul Manafort, who at the time had recently been ousted after news surfaced of his ties to a pro-Russian Ukrainian party. And Stone describes his contacts with Guccifer 2.0, which he says were limited to Twitter direct messages, as innocuous.

Stone broadly dismisses the intelligence community conclusion that Russia interfered in the election by arguing intelligence analysts want to start a war with Russia. “They are deeply unhappy over President Trump’s refusal to expand the proxy war in Syria and their failure to obtain the no-fly zone promised to them by Hillary Clinton, which would be an open invitation for World War III,” he says.

Stone has made similar claims before, but Tuesday will mark the first the time he will have to defend them under oath, where false statements could draw perjury charges.

“It would be beneficial if he was forthcoming,” said Swalwell, one of the lawmakers Stone accuses in his statement of making false claims against him. Swalwell also notes Trump and others have repeatedly been caught in lies about contacts with Russia. “There is an element, I believe, of deceit that is taking place.”