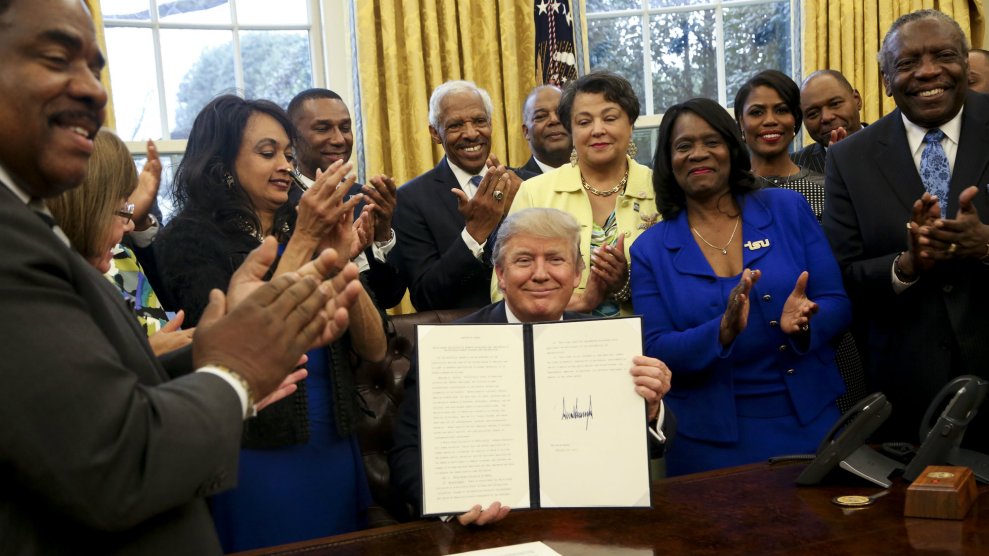 In early February, in a high-profile meeting with black leaders in the Oval Office, President Donald Trump promised to make historically black colleges and universities an “absolute priority.” Leaders of HBCUs left that meeting, the culmination of weeks of frequent communication with the incoming Trump administration, feeling enthusiastic. But then Trump unveiled his budget proposal in May: HBCUs got none of the financial boost leaders anticipated. Moreover, Trump planned to cut key grant programs that help a majority of HBCU students. And now, Trump has yet to make good even on the promises contained in an executive order he signed in February, including moving an HCBU liaison into the White House and convening an advisory board for the schools.

Rep. Alma Adams (D-N.C.), a leader on the issue for the Congressional Black Caucus, offered a blunt assessment to Mother Jones of what the Trump administration has done to date for HBCUs: “Nothing.”

Beyond Trump’s unfulfilled promise to relocate the HBCU office from the Department of Education into the White House, his administration hasn’t even announced a pick to lead the office. According to The Chronicle of Higher Education, the White House has had difficulty finding someone willing to take the job. The advisory board, which would guide Trump on issues important to the HBCU community, has yet to convene, says Michael Lomax, president of the United Negro College Fund. “And we’ve had no real consistent communication with the White House or the Department of Education since the meeting in February,” he adds. (The White House declined to respond to questions from Mother Jones.)

“The national disgrace that was Charlottesville and the false equivalency he made between the Nazis/white supremacists and those who opposed them” gave HBCU leaders reason to doubt Trump’s competency as president.

Frustration with the Trump administration among black college leaders came to a head in August as multiple advocacy groups and Congressional Black Caucus members called on the administration to postpone an annual HBCU conference scheduled for mid-September. They cited Trump’s inaction, as well as their outrage over Trump’s equivocating response to the violence by white supremacists in Charlottesville, Virginia.

“This country is having a crisis of leadership,” CBC chair Rep. Cedric Richmond (D-La.) said following Trump’s remarks. “This president has proven time and time again that he doesn’t have the maturity or the temperament to govern in a common-sense manner.”

In a letter to HBCU presidents in August, Lezli Baskerville, president of the National Association for Equal Opportunity in High Education, wrote that Trump’s response to “the national disgrace that was Charlottesville and the false equivalency he made between the Nazis/white supremacists and those who opposed them” had given HBCU leaders reason to doubt Trump’s competency as president.

Richmond and Adams, who co-chairs the congressional HBCU Caucus, called for the annual national conference in the nation’s capital to be postponed. Some HBCU leaders have since bowed out of the conference, scheduled to begin September 17, according to Lomax; he said presidents from some of the 37 HBCUs his organization represents decided not to attend, fearing that the gathering would be little more than just another PR event for the White House. “They don’t want to be present just for an announcement of who’s going to be the executive director or who’s on the Board of Advisors. They want a plan and real commitments that we can discuss with [the Trump administration],” Lomax said. Johnny Taylor, president of the Thurgood Marshall College Fund, wrote in an August letter to the Trump administration that the presidents of multiple schools represented by the TMCF also would not attend.

In early September, Education Secretary Betsy DeVos said in a statement that the annual conference would be pared down—presumably in response to criticism from HBCU stakeholders and diminished interest in the event. The more “intimate” conference will now include a day of “strategic meetings” at the White House, the statement said. Trump aide Omarosa Manigualt-Newman, one of the primary White House liaisons to HBCUs, confirmed to the Associated Press that an announcement would be made at the conference about who would lead the HBCU office to be relocated in the White House.

As Trump drags his feet on bolstering federal support for black colleges, HBCU leaders are racing to get ahead of him in Congress. Trump proposed cutting millions of dollars from programs that support degree programs at the schools, as well as billions from federal financial aid programs, such as the Pell Grant and work study program, that many HBCU students rely on. Around 70 percent of HBCU students are low-income and use Pell Grants to pay for school. Cuts to the programs would mean fewer HBCU students could finish their degrees, and that could cost some HBCUs millions of dollars in revenue.

The congressional vote on Trump’s proposed cuts is expected to come in October. Until then, black college advocates will be redoubling their efforts to convince Congress members not to approve those cuts, and instead to boost financial support for HBCUs in the budget for the next fiscal year.

The Congressional Black Caucus will ramp up meetings with HBCU leaders and other lawmakers during its annual legislative conference the same week as the White House conference, Rep. Adams said. She notes that supporting black colleges isn’t a partisan issue. “When you look nationally, most of the HBCUs are in Republican districts,” she said. Most of the approximately 100 HBCUs are in Southern states.

Since February, the HBCU Caucus has twice written to the Trump White House seeking clarification on what steps the administration has taken on recommendations made by HBCU leaders regarding how the Trump administration could support their schools. It has not received any response yet, according to Adams.

“It’s almost like we’ve been ignored,” she says. “So when you want people to come back and see you,” she said regarding the summit next week, “I’m sure they’re wondering, ‘Well, what in the world for?’”