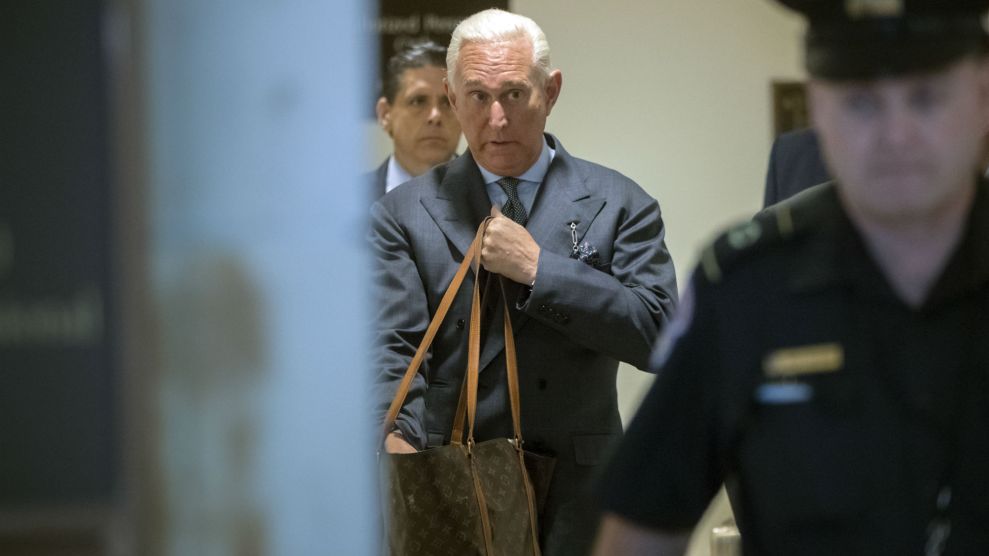 Roger Stone arrives Tuesday to testify behind closed-doors as part of the House Intelligence Committee's investigation into Russian meddling in the 2016 election.J. Scott Applewhite/AP

In one of the more theatrical moments of the Trump-Russia investigation so far, longtime Trump adviser and self-proclaimed dirty trickster Roger Stone appeared on Capitol Hill on Tuesday morning to be questioned by the House intelligence committee. Prior to arriving, carrying a Louis Vuitton tote bag, Stone released a 26-page statement, with 21 pages of exhibits, in which he declared he was innocent of any collusion with Russia or WikiLeaks. And after the session, while parrying with reporters, he bragged about the suit he was wearing and proclaimed he had “answered all of the questions” the lawmakers asked him. But he hadn’t.

Stone put forward a vigorous defense of himself, but ignored perhaps the most damning evidence.

Stone was called before the panel to explain tweets and statements he made during the 2016 campaign in which he bragged about contacts with WikiLeaks and in which suggested he might have had advance knowledge of WikiLeaks’ dumping of hacked emails to hurt the Clinton campaign. Lawmakers also wanted to know about his relationship with a hacker group believed to have worked for Russian intelligence. As he has done previously, Stone declared that the entire investigation into possible collusion between Team Trump and Russia is bunk. But while putting forward a vigorous defense, he did not address perhaps the most damning evidence that he possibly was in cahoots with WikiLeaks.

Stone has claimed he only communicated with founder Julian Assange via an intermediary when WikiLeaks was mounting its campaign against Hillary Clinton. But after his three-hour, closed-door session with the committee, Stone told reporters he had declined to identify his claimed go-between. Rep. Adam Schiff (D-Calif.), the top Democrat on the panel, said Stone would not address a “seminal area of importance to the committee,” and threatened to subpoena Stone, which would require support from committee Republicans. “He refused the central question we had, which was who was he communicating with,” said one committee member who asked not to named.

Last August, Stone said he was in communication with Julian Assange. Now he claims it was through an unnamed intermediary.

In making his defense—with a long statement and accompanying timeline he prepared for the committee—Stone grandly waved aside several notorious instances during the 2016 campaign in which he acted in a way that suggested he was in direct contact with WikiLeaks and possessed inside information on its efforts to derail the Clinton campaign. These moments are often included in timelines of the Trump-Russia scandal to suggest a direct connection between TrumpWorld and Moscow. For instance, on August 8, 2016, Stone, during a speech in Florida, said he was in communication with Julian Assange and that there would be more leaked Clinton documents coming, possibly related to the Clinton Foundation. Now Stone says he was interacting with Assange through a “mutual acquaintance,” and he downplays his prediction of more leaks to come.

His August 21, 2016, tweet declaring it “will soon the Podesta’s time in the barrel” has drawn much attention. It came six weeks before WikiLeaks released hacked emails from the account of John Podesta, the chief executive of the Clinton campaign. But Stone similarly insists that this tweet was unrelated to any inside information. He asserts he was guessing that Podesta’s business associations—and those of Podesta’s lobbyist brother—would soon be in the public spotlight. The tweet, as he points out, does not reference WikiLeaks or stolen documents.

But there’s a series of later tweets that are far more intriguing, and which Stone ignores in his defense—and neglects to include in the timeline he submitted to the House intelligence committee. At around one in the morning on October 2, Stone tweeted: “Wednesday@HillaryClinton is done. #WikiLeaks.” Two days later, he tweeted: “I have total confidence that @wikileaks and my hero Julian Assange will educate the American people soon #LockHerUp.”

These tweets certainly suggest that Stone knew something was coming soon from WikiLeaks. In fact, on Thursday, October 6, the hacked emails of Clinton insider Capricia Marshall were posted on the DCLeaks site, and the true bomb hit the following day: WikiLeaks began posting the first group of 60,000 emails stolen from Podesta. These emails would be released by WikiLeaks in small batches almost daily over the next month,  creating a drip-drip-drip crisis the Clinton campaign could not shake.

Stone’s tweets—especially the one on October 2—indicate prior knowledge of a major WikiLeaks action against Clinton. Days later, such a move happened. Perhaps this was another coincidence. But it is suspicious that Stone goes through much exertion to explain away his August statement and tweet but ignores the October tweets, including one that specifies, almost to the day, the timing of a WikiLeaks blast against Clinton. So what enabled him so confidently to predict Clinton’s WikiLeaks doom?

Congressional investigators—and special counsel Robert Mueller—would be wise to ignore Stone’s theatrics and self-serving defense and pay close attention to those October tweets. If Stone is excluding them from his account, that’s a good enough reason for scrutiny.

Outside the hearing room, Stone—a longtime conspiracy theorist (he wrote a book saying LBJ killed JFK), and now a regular contributor on Alex Jones’ Infowars site—took a confrontational stance. He boasted that he had matched committee Democrats point by point. He demanded that three committee Democrats—as well as Clinton—apologize to him. But if Democratic committee members are right, Stone’s time in the barrel may not yet be over.