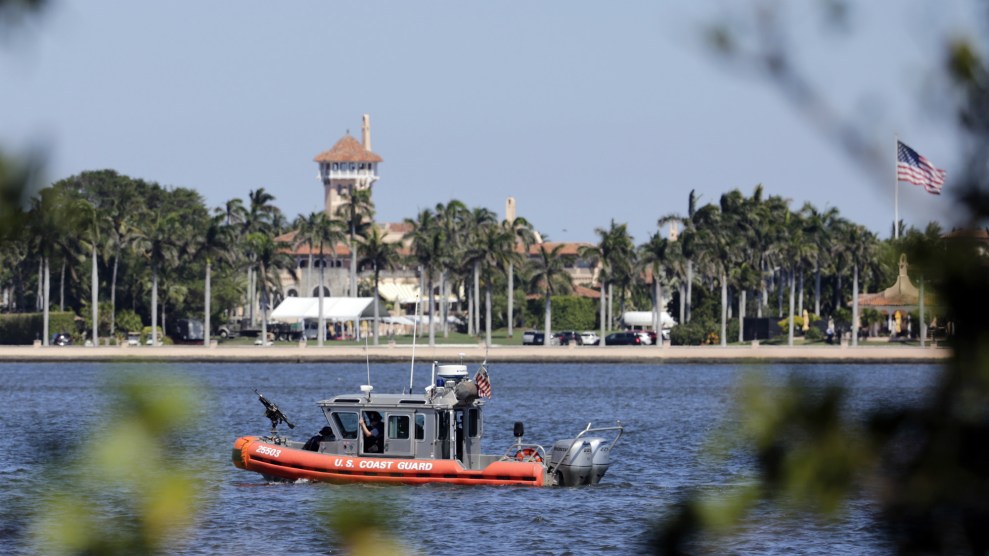 A watchdog group is threatening to renew a legal fight against the Trump administration following the White House’s decision Friday to withhold the names of thousands of people who have visited the president’s exclusive Florida club since January.

Back in July, after Citizens for Responsibility and Ethics in Washington first filed a lawsuit to obtain the Mar-A-Lago records, the administration seemed surprisingly agreeable, voluntarily promising to release something by September 8. That deadline was pushed back at the last minute, but at noon on Friday, the administration turned over its list of visitors: There were just 22 names, all of them members of the Japanese prime minister’s entourage. CREW and other ethics experts immediately cried foul.

“This was spitting in the eye of transparency. We will be fighting this in court.”

At issue is the fact that the US Secret Service keeps careful track of everyone who enters the Mar-A-Lago club, dubbed the “Winter White House” by the administration. Trump has stayed there dozens of nights since he took office, holding court in the public areas, greeting members (who pay hundreds of thousands of dollars in initiation and membership fees), and crashing weddings in the rented-out ballroom. The Secret Service keeps a similar set of records for visitors to the actual White House—a set of names that the Obama administration released regularly, but which the Trump administration so far has not. In January, watchdogs filed a Freedom of Information request for the Secret Service records, and then in April, CREW filed a subsequent lawsuit demanding that the Secret Service respond to the FOIA the way the Obama administration had. In July, the administration agreed that it would, at least, release any records that were “responsive” to CREW’s request.

After the agreement was made, the federal judge in the case issued an order requiring the release.

Under FOIA, some records are exempt from being made public. In this case, it turns out, the administration’s opinion is that all the records are exempt from disclosure except for the names of the Japanese prime minister’s entourage. Despite the fact that other foreign leaders—as well as thousands of club members, guests, and event attendees—visited the club, no other names were released today.

The list of the 22 names that were released can be read here.

“The government seriously misrepresented their intentions to both us and the court,” Bookbinder said in a statement. “This was spitting in the eye of transparency. We will be fighting this in court.”

CREW will challenge the decision to release only 22 names in further litigation, the group said in a tweet.

In the first few weeks of Trump’s presidency, Mar-A-Lago became the scene of a string of surreal moments—official business usually restricted to the secure environs of the White House was carried out casually in front of wealthy and less-than-discrete club members in public dining rooms and on patios. The most powerful man in the world wandered through well-timed wedding receptions. Club members bragged about their proximity to the nuclear football. The moments shocked security experts and infuriated transparency advocates who pointed out that this extraordinary access to the president was restricted to those who could pony up the $200,000 initiation fee (increased in the wake of Trump’s election in what would appear to be his own company’s naked effort to capitalize on his campaign victory).

Typically, the American president lives in a carefully guarded bubble. His opportunities to mingle freely are minimal, and access is severely limited. While presidents have always taken vacations, they have largely stayed away from the public eye—photos posted by Mar-A-Lago members and guests of Trump’s visits to the club were unprecedented and showed the president literally being mobbed by groups of people who surrounded him, chatting and posing for pictures. And while presidents have also regularly attended closed-door political functions with donors and supporters, those events have never occurred with the frequency of Trump’s Mar-A-Lago visits last winter and spring, nor in such close proximity to sensitive moments, such as Trump’s consultation with the Japanese prime minister over news of a North Korean missile test.

And the ethical quandaries aren’t just limited to Mar-A-Lago—a renovated mansion that has luxurious grounds but no golf course. In CREW’s lawsuit, similar White House logs were sought, as well as logs for visitors to Trump Tower in New York City. So far, only the (extremely limited) Mar-A-Lago records have emerged. A recent investigation by USA Today showed that 50 executives who have companies with federal contracts and 21 lobbyists are members of at least one of Trump’s three private golf clubs that he has visited most often since becoming president—and two-thirds of them have played golf on days that Trump was there.