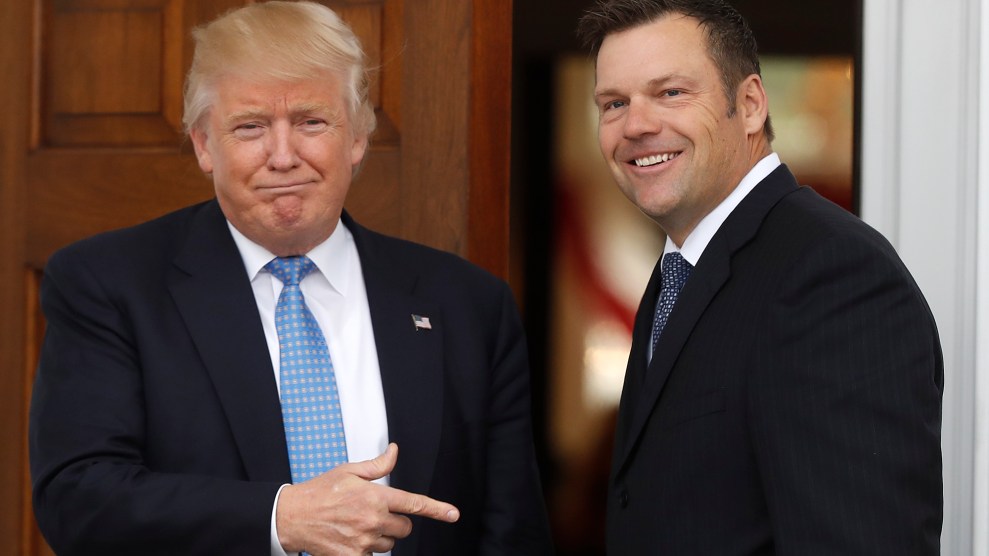 If its meeting on Tuesday was any indication, President Donald Trump’s election commission is focused on building up a narrative about widespread voter fraud—and potentially laying the groundwork to impose new restrictions on voting in order to combat it.

The members of the Presidential Advisory Commission on Election Integrity have promised to undertake their work without preconceived notions and denied allegations that they’ll push for new policies that make it harder to vote. But at the commission’s second meeting, in New Hampshire on Tuesday, vice-chair Kris Kobach, the Kansas secretary of state, continued to perpetuate the unfounded claim that illegal voting tipped the state to Hillary Clinton in the 2016 election.

Ahead of the meeting, Kobach penned an op-ed in Breitbart in which he claimed there is “proof” that illegal votes cast by residents of other states caused Trump to lose New Hampshire. Kobach refused to back away from that claim on Tuesday, saying that “we will never know the legitimacy of the election” in New Hampshire. His assertion is based on the fact that more than 5,000 people voted in the state using out-of-state driver’s licenses, which is legal, and that few of them subsequently obtained New Hampshire licenses.

Kobach’s claim was quickly rebutted by New Hampshire Secretary of State Bill Gardner, a Democrat on the commission. Gardner said the election results were “real and valid” and that Kobach was finding for conclusions unsupported by the evidence.

The all-day hearing raises more questions about the intentions of Kobach and other commissioners, including Hans von Spakovsky of the conservative Heritage Foundation, who has a long history of pushing for voting restrictions. Wendy Weiser of the left-leaning Brennan Center for Justice commented on Twitter, “Most of the fraud commission’s evidence of fraud seems to come from the commissioners themselves.”

Kobach’s claim about New Hampshire set the tone for the rest of the session. During the following panel, titled “Current Election Integrity Issues Affecting Public Confidence,” Kobach took the opportunity to tout the eight prosecutions of fraud he has pursued in Kansas, as well as two more he currently has “in the hopper.”

Von Spakovsky spent a significant part of his testimony citing cases in the Heritage Foundation Voter Fraud Database, which he manages: a 2000 case in California, a 2008 case in Washington, a 2002 case in Alabama, a 2009 case in Texas. The Brennan Center evaluated the database ahead of Tuesday’s meeting and found that its entries were a grab bag of mostly old cases and that its claims of fraud were “grossly exaggerated.” Von Spakovsky also cited a deeply flawed report by a fellow commissioner, J. Christian Adams, which claimed that thousands of “aliens” have been casting votes in Virginia.

Another speaker on the panel, Ken Block, testified about a recent study he conducted on double voting in the 2016 election for the Government Accountability Institute, the watchdog group co-founded by former Trump strategist Steve Bannon. Block’s study concluded that there were 40,000 instances of double-voting in the 2016 election and that these illegal votes had a significant effect on close contests around the country. Experts have pointed out flaws in the study, but it did go further than trying to simply match names and birthdates of voters in different states, which critics fear the commission itself will do with the voter data it has collected. Still, the study actually identified a relatively small number of instances of double-voting compared to the total votes cast.

While Kobach and von Spakovsky portrayed voter fraud as a pervasive problem, they didn’t speak much about solutions. What the commission might do about fraud didn’t come up until the very end of the panel, when commissioner Adams—a conservative attorney who sues counties to force them to purge their voter rolls—asked the panelists whether voter rolls could be cleaned without disenfranchising eligible voters. They all said yes.