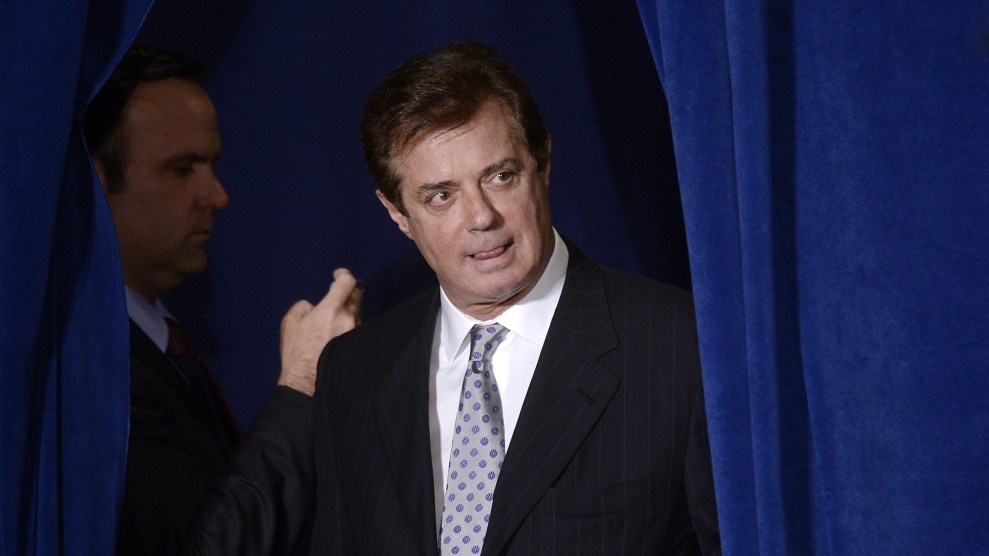 Special Counsel Robert Mueller on Monday unveiled an indictment of Paul Manafort, Donald Trump’s former campaign chairman, and Rick Gates, Manafort’s longtime business partner. The indictment alleges that the men earned tens of millions of dollars in income by secretly lobbying for the former pro-Russian president of Ukraine and then laundered the money to evade taxes, “enjoy a lavish lifestyle,” and cover personal expenses. Here are some of the most important allegations in the indictment.

Manafort allegedly used offshore accounts to spend $934,350 at a antique rug store in Alexandria, Va., through eight purchases made between 2008 and 2010. He spent another $100,000 with another vendor, that is “related to” the rug store in 2012, the indictment says. Manafort also allegedly spent $849,215 on clothing at one men’s clothing store in New York, along with $520,440 at a Beverly Hills, Calif., store. (That could explain why FBI agents reportedly photographed Manafort’s suits during a raid on his home in July.) Manafort also used offshore accounts to pay for a Mercedes and to make payments “relating to three Range Rovers,” and for art, housekeeping, and landscaping, prosecutors say. The indictment details those payments to explain how Manafort and Gates put proceeds from their lobbying work in offshore accounts, then used wire transfers from the accounts to buy luxury goods without paying taxes on the income.

Without registering as lobbyists under the Foreign Agents Registration Act, Manafort and Gates hired Washington lobbying firms to conduct an influence campaign on behalf of then-Ukrainian president Victor Yanukovich and his pro-Russian Party of Regions from 2006 through 2015. The indictment says the men illegally failed to register with the Justice Department as agents of a foreign state and lied to the DOJ to conceal their work. The two firms the men hired are identified as “Company A” and “Company B” in the indictment. Those companies appear to be the Podesta Group (the group’s founder, Tony Podesta, announced Monday he would step down from the firm) and Mercury Public Affairs, based on their public declarations. It’s not clear which is “A” and which is “B.” Manafort allegedly used offshore accounts in Cyprus and Grenadines to pay the companies a combined $2 million in fees from 2012 to 2014.

Manafort and Gates set up a phony nonprofit group called the European Centre for a Modern Ukraine, based in Belgium, “as a mouthpiece for Yanukovych” and to “lobby and conduct a public relations campaign in the United States and Europe,” the indictment says. Mercury and Podesta have said they did not initially register as lobbyists for Yanukovych because they believed their work was for the nonprofit. But the indictment casts doubt on those claims. Manafort and Gates selected the companies before the centre—”without ever meeting either company”—signed contracts with them, prosecutors say. The indictment notes the firms lobbied Congress about Ukraine sanctions, the validity of disputed Ukrainian elections, and the propriety of Yanukovych imprisoning a political rival. And prosecutors say Gates told Company A it would be “representing the Government of Ukraine in [Washington,] DC.” Gates also wrote to both firms requesting an assessment of their work so that “Paul” could brief the “President,” meaning Yanukovych. When the reports emerged of their secret work for Ukraine, Gates allegedly sent the firms talking points to conceal the true purpose of their work, including a false claim that Gates and Manafort did not set up the contract. According to the indictment, an unidentified principal at “Company B” wrote back to note that email traffic suggested Gates was “more involved than this suggests[.] We will not disclose that but heaven knows what former employees…might say.”

3. Manafort and Gates lied to everyone

The indictment alleges that Manafort and Gates “repeatedly provided false information to financial bookkeepers, tax accountants and legal counsel, among others.” Manafort for years told his tax preparer that he had no authority over foreign bank accounts, prosecutors say. In fact, he and Gates controlled at least 15 foreign entities, the indictment alleges. Gates also lied to the Treasury Department when he failed to disclose foreign accounts he set up abroad, prosecutors say. In addition, the two men, as recently as February 10, 2017, allegedly lied to the DOJ by claiming they did not conduct outreach in the United States. Manafort and Gates face charges for making “materially false, fictitious, and fraudulent” statements to the Justice Department and tax evasion charges for lying to the IRS.

The indictment details how Manafort allegedly used offshore accounts to purchase real estate, including multi-million-dollar properties in New York, and then “took out mortgages on the properties.” Doing so allowed him to “have the benefit of of liquid income without paying taxes on it,” prosecutors charge. Manafort used a $2.85 million condo on Howard Street in Manhattan’s SoHo neighborhood to generate rental income, “charging thousands of dollars a week on Airbnb, among other places,” and also took advantage of beneficial tax consequences of owning a rental property, the indictment says.

Manafort did not stop at using laundering income from illegal foreign lobbying to earn real estate income, the indictment says. He also allegedly defrauded banks by falsely applying for construction loans to cover renovation costs. That allowed him to get a loan “against the expected completed value of the property” which would be higher due to the renovation. But prosecutors charge that Manafort was using the loans for other real estate purchases, not for construction costs, as he claimed.

6. Manafort asked his son-in-law to lie for him

The indictment alleges that Manafort lied to a bank in a mortgage application by claiming his SoHo condo was an owner-occupied property, which allowed for a better mortgage rate. He allegedly did so by falsely claiming it was a secondary home his daughter and son-in-law lived in, not a rental property. On January 26, 2016, he wrote his son-in-law to tell him that when the bank appraiser came to the condo, “[r]emember, he believes that you and [Manafort’s daughter]” are living there,” according to the indictment.

7. Gates comes off as Manfort’s lackey

The indictment says Gates used the secret lobbying income the men generated for personal expenses, but it also depicts Gates as committing many of his alleged crimes at Manafort’s behest. It calls Gates Manafort’s “right-hand-man.” For example, prosecutors say Gates oversaw the creation of a document that claimed Manafort’s Howard Street property was a second home for Manafort’s daughter and son-in-law, though Gates “knew this fact to be false.”