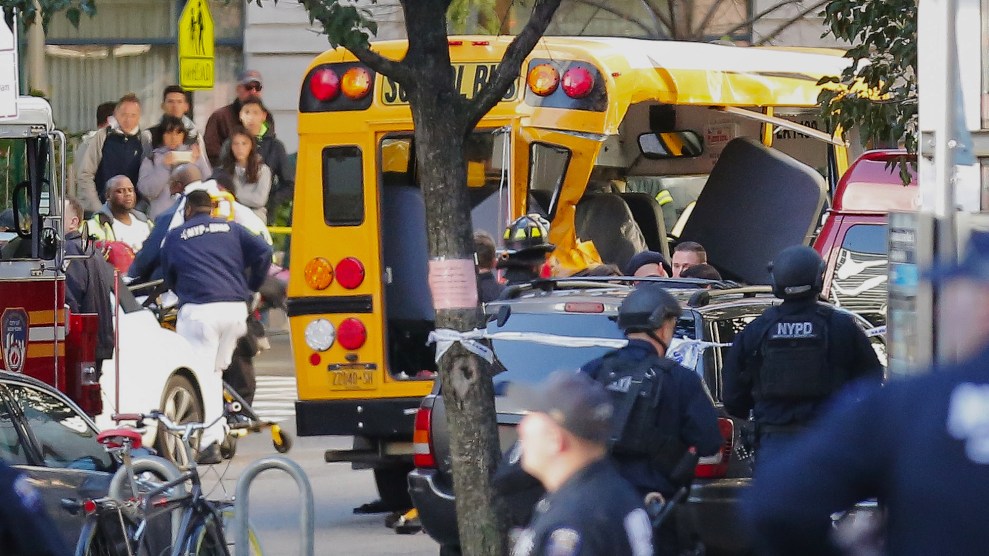 Eight people were killed and more than a dozen others injured when a white pickup truck careened down a bike lane in Lower Manhattan Tuesday afternoon, according to the city’s mayor, Bill de Blasio. The driver of the truck struck and killed several cyclists and pedestrians during his rampage—mangled bikes could be seen strewn along the path—before getting out of the vehicle with what police described as a pellet gun and a paintball gun. He was shot in the abdomen by police, and is now in custody.

The suspect was identified by police as a 29-year-old male. ABC News and CBS News report that the suspect is Sayfullo Saipov of Tampa, Florida, though the NYPD has yet to release the information.

The incident, which is being treated as an act of terrorism, came to an end on of the West Side Highway near Chambers Street where the truck hit a bus—close to the World Trade Center site.

“It’s a very painful day in our city,” de Blasio said at a press conference two hours after the attack. “This was an act of terror and a particularly cowardly act of terror aimed at innocent civilians.”

New York Governor Andrew M. Cuomo said there was no ongoing threat to the city, which at the time of the attack was mere hours away from throwing its famous annual Village Halloween Parade—though, he said, New Yorkers themselves will see increased security around transport hubs into the night.

Amid the press conference, President Donald Trump responded to the incident on Twitter:

In NYC, looks like another attack by a very sick and deranged person. Law enforcement is following this closely. NOT IN THE U.S.A.!

Update 8:23 pm: More details have emerged about Sayfullo Saipov. Investigators told the New York Times that Saipov left handwritten notes near his truck indicating allegiance to the Islamic State. However, investigators have yet to find evidence of direct ties and are treating the incident as an “inspired” attack, according to the Times.