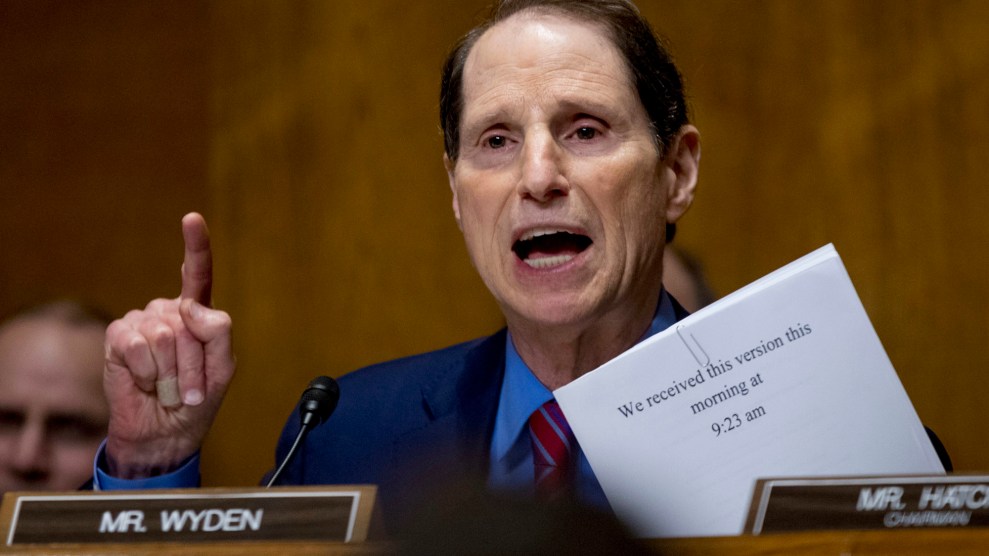 At a packed press conference on Capitol Hill on Wednesday, Sen. Richard Burr (R-N.C.), the chairman of the Senate intelligence committee, provided a progress report on his panel’s investigation of the Trump-Russia scandal. Naturally, this is a touchy and dicey matter for a Republican, and Burr tried to make some points that appeared designed to limit President Donald Trump’s political vulnerabilities on this front.

First, Burr declared that although Russian hackers had probed or penetrated the election systems of at least 21 states, he could confidently state that the Russian meddling in the 2016 election resulted in no changes to the vote tallies. That is, there’s no reason to question Trump’s Electoral College win. And second, Burr said that Russia’s use of Facebook ads during the presidential campaign seemed “indiscriminate” and not designed to help a particular candidate—meaning the recent revelations do not bolster the case that Trump was the Kremlin’s choice.

“The chairman said that he can say ‘certifiably’ that there was no vote tampering. I do not agree with this judgment.”

But Sen. Ron Wyden, (D-Ore.), a feisty member of the intelligence committee, says both assertions are bunk. In an interview with Mother Jones on Thursday, Wyden argued that Burr’s confidence in the election system was unwarranted. “The chairman said that he can say ‘certifiably’ that there was no vote tampering,” said Wyden. “I do not agree with this judgment. I don’t think it is possible to know that. There was no systematic analysis of the voting or forensic evaluations of the voting machines.”

Wyden pointed out that the Department of Homeland Security has noted that its assessment that there was no finagling with the vote count was made with only “moderate confidence.” For Wyden, that’s not good enough for such a sensitive and significant matter—and it sends the misguided signal that the voting system is doing just fine. Wyden believes that’s the wrong message. This week he sent a letter to the major manufacturers of voting machines demanding information about how they protect themselves from cyberattacks.

Wyden also said that Burr erred in declaring that the Russian Facebook ads—some of which targeted swing states—did not favor a presidential candidate. (Presumably Wyden has seen or been briefed on the content of the ads.) “That’s one reason why the ads need to be released to the American people,” Wyden remarked, “so Americans can make up their minds.”

At the press conference, Burr said the committee would not be releasing the ads, which Facebook has turned over to the panel. And Facebook so far has declined to make the ads public. Wyden and Sen. Mark Warner (D-Va.), the vice chairman of the committee, have called on Facebook to release the material. “If the ads don’t come out,” Wyden noted, “it’s within the power of the committee to get them out.” The Russian social media campaign targeting the 2016 election, Wyden said, “certainly hasn’t gotten the attention it should have.” And he noted it has been a focus of his efforts on the intelligence committee. The intelligence committee has scheduled a hearing with representatives from Facebook, Google, and Twitter for November 1.

Wyden worries that US elections remain vulnerable to interference from Russia and other adversaries. He emphasized that Trump has yet to nominate a secretary for the Department of Homeland Security, the lead federal agency that deals with protecting state voting systems from cyber assaults. Other key cybersecurity DHS positions remain vacant, as well. He said that at the moment just three or so states are taking significant steps to secure their voting systems from hackers. Wyden scoffed at Burr’s assertion that the Trump administration was treating the issue seriously. “The idea that Trump and DHS are full steam ahead on election security? No way!” Wyden exclaimed. “They certainly haven’t moved quickly on this.”

Wyden cited one example of an issue that requires deeper digging from the intelligence committee. When Jared Kushner, Trump’s son-in-law and a White House adviser, met privately with committee investigators, Kushner released a statement declaring he had engaged in no wrongdoing. He insisted, “I did not collude…with any foreign government. I had no improper contacts. I have not relied on Russian funds to finance my business activities.” Wyden pointed out the wording of the last part of this denial: I have not relied on Russian funds. “Some lawyer got paid a lot of money to come up with that,” Wyden said. “It doesn’t mean ‘I did not have business dealings with Russians.'”

Wyden added that Kushner should not be able to get away with only a private meeting with the committee instead of a full public hearing where he could be questioned by senators about this statement and many other topics. “Jared Kushner has to come to the intelligence committee in the open,” he said. (Wyden, the top Democratic on the Senate finance committee, has blocked the confirmation of a senior Treasury Department nominee because the department has not provided the finance committee with documents he requested related to Russian banking and money laundering. )

Wyden also took issue with Burr saying that it was not the intelligence committee’s role to probe Trump’s firing of FBI chief James Comey and that this matter should be left to the Senate judiciary committee. “I don’t agree with that,” Wyden said. “This is about connections with Russia.”