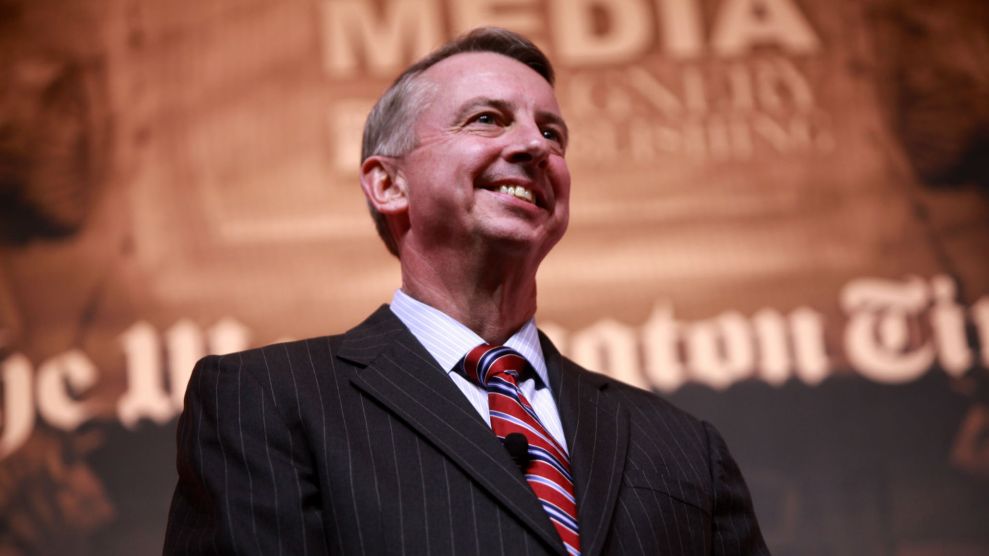 Ed Gillespie, the Republican nominee in the hotly contested Virginia governor’s race, is trying mightily to appeal to supporters of President Donald Trump with fear-mongering ads about the dangers of undocumented immigrants and the threat posed by the MS-13 gang. But this week, Gillespie will take a break from wooing Republican base voters to raise campaign cash at the home of a vocal anti-Trump activist who sought to block Trump from receiving the GOP nomination at last year’s party convention and her husband, a Koch brothers operative.

According to an invitation described to Mother Jones by someone who received it, the hosts of the Gillespie fundraiser are longtime Virginia political activists Anne and Kevin Gentry. Anne was an at-large delegate to the 2016 GOP national convention where she and several other Virginia Republicans fought to keep Trump off the ticket. She attended the convention in support of Sen. Ted Cruz (R-Texas). Kevin, her husband, is a senior executive in the political and philanthropic network funded and organized by the billionaire industrialists Charles and David Koch. (During the 2016 election, the Koch brothers withheld their support from Trump and largely sat out the campaign.)

Vice President Mike Pence, a supporter of the Kochs, is scheduled to headline the event, according to the invitation.

Reached by phone, Anne Gentry said, “This isn’t a good time,” and hung up. A spokesman for Gillespie declined to comment. A spokeswoman for Pence did not respond to a request for comment.

Raising money at the home of a prominent Trump critic could cause headaches for Gillespie. He has walked a tightrope when it comes to Trump: keeping a distance from the president in the more Democratic-leaning suburbs of northern Virginia, but at the same time appealing to voters in Virginia’s rural and semi-rural counties that Trump dominated last year with a distinctly Trumpian anti-immigration message. Despite Trump’s endorsement-by-tweet of Gillespie, the president has yet to appear in person on behalf of the Republican gubernatorial candidate, and it is unclear if Trump will stump for Gillespie before election day.

Gillespie, a longtime Republican operative, is far from an obvious choice for Trump voters in Virginia. He is the epitome of a Beltway insider: a former chairman of the Republican National Committee and a high-priced lobbyist or consultant for Enron, Bank of America, AT&T, and other multinational corporations. He is a creature of the so-called swamp that Trump vowed to drain.

Yet Gillespie’s path to victory in Virginia’s governor requires a strong turnout in Virginia’s Trump country. At the same time, he must prevent his Democratic opponent, Lt. Governor Ralph Northam, from running up a huge margin in populous northern Virginia.

Gillespie has trailed Northam in the polls consistently throughout the race. A fundraiser at the home of two well-connected, northern Virginia Republican activists will replenish his campaign war chest in the race’s final days. He clearly is calculating that this cash infusion outweighs any possible harm of throwing a fundraiser at the home of a vociferous Trump critic.