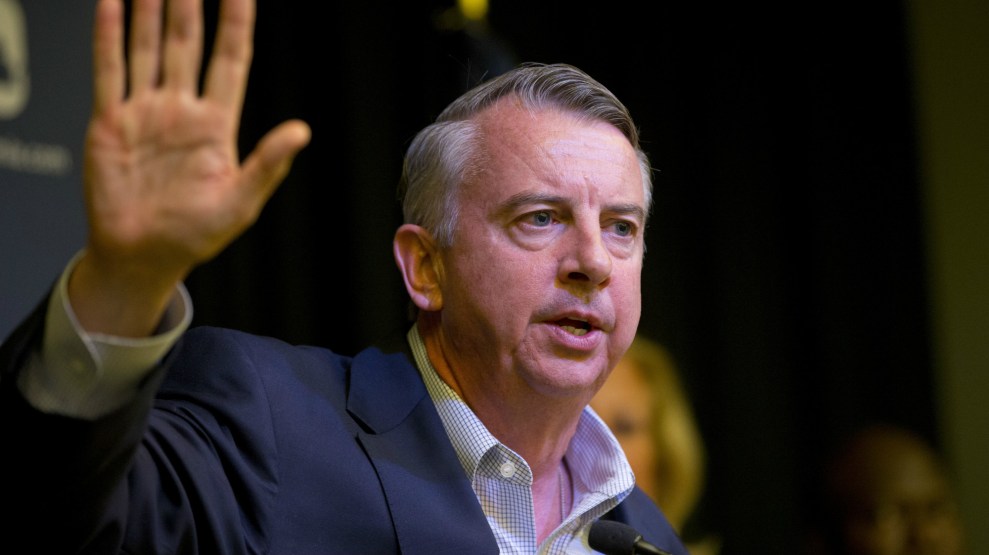 Something was missing when Ed Gillespie spoke to members of the Virginia NAACP Saturday in Richmond. Gillespie, the Republican candidate for governor, talked about education and jobs and the “school-to-prison pipeline.” He talked about second-chances for convicted felons and sentencing reform. He emphasized how eager he was to work with black leaders if elected—and how hard he had worked to rearrange his schedule to be at an event he had not originally been scheduled to attend. He sounded like the Republican reformer the Richmond Times-Dispatch had effusively endorsed one day earlier with the tough-but-fair pull-quote: “In an era of screamers, Gillespie speaks in calm tones.”

The NAACP conference offered a natural opportunity for Gillespie to defend himself on the racial wedge-issue at the center of his campaign. He passed.

What was missing Saturday was the campaign Gillespie is actually running. Gillespie spoke and answered questions for 25 minutes, but in that time he never once mentioned the gang MS-13, the subject of an ad campaign that has been running seemingly on loop in Virginia for two months. In the ads and accompanying mailers, Lt. Gov. Ralph Northam, the Democratic nominee, is accused (falsely) of backing sanctuary cities, and therefore, of enabling violent crimes by scary Latino gang members. One representative ad featured a group of tattooed Salvadorans over the text “Kill. Rape. Control.” Perhaps giving away the game, the Central American men featured in that anti-MS-13 spot were not members of MS-13, and the photo came from a prison in El Salvador. Virginia’s big, but it’s not that big.

Gov. Terry McAuliffe (D), who addressed the room a few minutes before Gillespie, has derided the ads as “racist” and “bigoted,” and Northam came out Friday with his own ad denouncing them. The NAACP conference offered a natural opportunity for Gillespie to defend himself on the racial wedge-issue at the center of his campaign. He passed.

Likewise, Gillespie avoided any discussion of restoration of felon voting rights at an organization that has been one of the leading champions voices on the issue. He’s not so quiet elsewhere. In a new spot last week, Gillespie attacked Northam over the re-enfranchisement of 150,000 ex-felons, tying the lieutenant governor to the case of a child pornographer. “Ralph Northam’s policy of automatic restoration of rights for unrepentant, unreformed, violent criminals is wrong,” Gillespie says in the ad.

As part of his kinder, gentler pitch, Gillespie told his audience Saturday that “it is a legitimate concern to have a criminal charge or conviction dog you for the rest of your life” (in response to a question about marijuana sentencing), but again he steered clear of his campaign’s new talking point.

One subject, though, couldn’t be avoided—Charlottesville. Gillespie, as he has done previously, unequivocally denounced the tiki-torch mob whose August rally ended in the killing of a counter-protester:

GILLESPIE: What we saw in August was horrific. And I’ve talked about this a number of times, but I wanted to share my thoughts about it. Take a couple points: First of all, I do think it’s important to note that 90 percent, according to news accounts, 90 percent of those white supremacists, KKK, Neo-Nazis, who were in Charlottesville came from outside out commonwealth. They were in Virginia. But they were not of Virginia.

Secondly, they are not on any legitimate political spectrum of left to right. Let’s be clear about that. These people are not out there because they think we should have more choice in our children’s education or lower taxes versus higher taxes. These are people who have a twisted mindset rooted in hate who want to oppress certain people. And when you have as a core believe that one race is superior to another or that adherents to another religion are inferior to you, that’s worse than immoral. That is dehumanizing. And that makes it a presence of evil in our world, and we must confront it and reject it at every turn. And that’s, when I saw what happened in Charlottesville and the impact it had on all of us—some had a more deeply felt impact than others—but I can tell you that what I saw there made me want to vomit.

A good clean riff. Except that the alt-right does have clear political preferences. They backed Donald Trump for president, and in Virginia, they support the preservation of Confederate monuments—the issue that brought them to Charlottesville in the first place. Gillespie, who also backed Trump, also wants those monuments to stay up, and he’s now attacking Northam for arguing otherwise. In Gillespie’s newest digital ad about the statues—the second this month—a narrator refers to the monuments as “our” statues, the same word used by Trump. Although he was speaking just a few miles away from Richmond’s Monument Avenue, the epicenter of the statue fight, the subject didn’t come up.

Gillespie was the only member of the Republican ticket to appear at the NAACP conference. (As it happened, the party’s nominee for lieutenant governor, Jill Vogel, couldn’t make it because she was at a fundraiser for Corey Stewart, the state’s leading Confederate monument activist, at a plantation house. Stewart, who narrowly lost to Gillespie in the primary, is now running for US Senate.)

But lest there be any confusion about what the 2017 election was really being fought over, the Democratic ticket that followed Gillespie to the dais was happy to offer a refresher. “If you walk out this hall and see the TV monitor in the lobby and Ed Gillespie comes on, guess what he’s talking about,” said Justin Fairfax, the party’s lieutenant governor nominee. “Gangs and MS-13 and fear-mongering and race-baiting and sanctuary cities.”