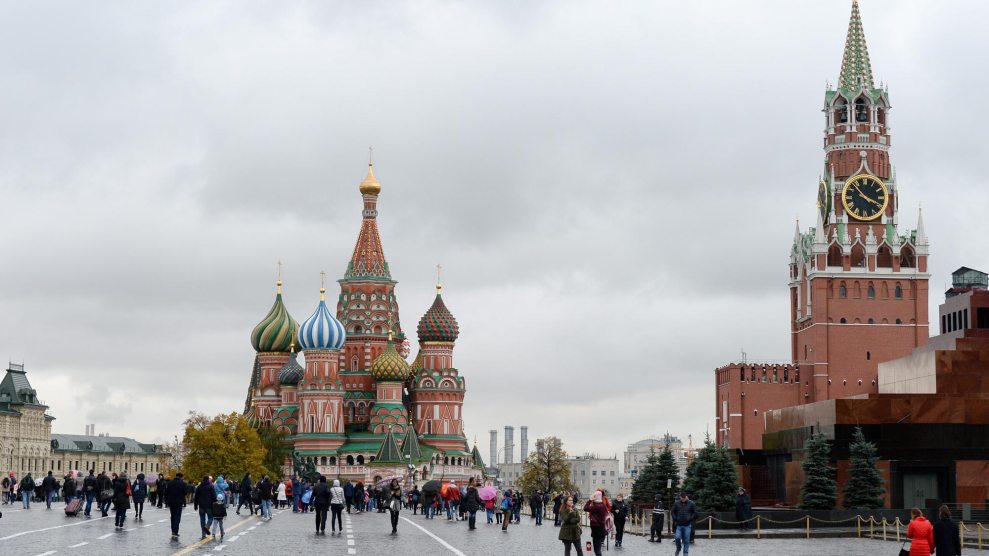 The statement made public by special counsel Robert Mueller on Monday morning announcing the guilty plea of former Trump foreign policy adviser George Papadopoulos produced a stunning revelation: a professor who touted his close ties to Russian officials told Papadopoulos in late April 2016 that he had learned on a trip to Moscow that the Russians had “dirt” on Hillary Clinton in the form of “thousands of emails.” (This was two months before the Russian hack of the Democratic National Committee became public.) This professor was not named in the statement, but according to the document, he is based in London, a citizen of a Mediterranean country, and on April 18, 2016 flew to Moscow to attend a meeting of the Valdai Discussion Club, an academic forum in Russia known for connecting Russian officials with Western diplomats.

This mystery professor is likely Joseph Mifsud of the University of Stirling in Scotland. According to a calendar entry on the Valdai club’s website, Mifsud spoke on a Valdai panel on April 19, 2016, titled, “World Energy: Key Trends and Political Risks.” Mifsud grew up in the Mediterranean nation of Malta, where he served in various government posts; he was the only Londoner and the only professor on the panel. The Mueller legal filing revealed that Papadopoulos had extensive contacts with the professor as part of an effort to set up a meeting between Trump campaign representatives and Russian officials. Papadopoulos told his campaign supervisors about this effort and was encouraged to proceed. Papadopoulos has pleaded guilty to lying to the FBI about his communications with the professor and others connected to Russia.

The Washington Post noted on Monday that Mifsud is probably the professor cited in the Mueller statement. One of the emails quoted in the document, according to the Post, “appears to match one described to the Washington Post in August in which Papadopoulos identified the professor with whom he met as Joseph Mifsud, the director of the London Academy of Diplomacy.” But the Post reported that in August Mifsud told the newspaper he had “absolutely no contact with the Russian government,” and he insisted his ties to Russia were purely academic.

The public record, though, contains information contradicting Mifsud and showing that he has had contacts with Russian government officials. According to photos on the website of Russia’s embassy in the United Kingdom, Mifsud met with embassy representative Ernest Chernukhin in July of this year (weeks before he issued his denial to the Post). A biography from a 2013 business conference says Mifsud “has advised Governments on international education issues in many countries including Morocco, Syria, Russia, Tunisia, and Italy.” Mifsud also met with Russian Ambassador to the UK Alexander Yakovenko in May of 2014, according to a 2014 Russian embassy press release.

Additionally, in early 2017, Mifsud invited Alexey Klishin, a department head and professor in the international law division of the Moscow State Institute of International Relations, a school run by Russia’s Foreign Ministry, to the London Academy of Diplomacy to present a lecture. Klishin was a former member of the upper house of the Russian parliament. According to a January 2017 press release from the Institution of the Russian Academy of Sciences, “Klishin’s presentation was devoted to international law and national legal systems [and] to their coexistence in the era of Brexit and the new presidency in the United States.” The release noted that Klishin had “visited the London Academy of Diplomacy at the University of Stirling…at the invitation of the Director Joseph Mifsud.” Here’s a photo with Mifsud (second from the right) and Klishin (center) standing next to each other:

Mifsud did not respond to a request for comment from Mother Jones.

One obvious question for the professor is why he told the Post he had “absolutely” no contacts with Russian officials when on-line material suggests he has. There are no indication in the Mueller statement whether his team has questioned Mifsud about the Clinton “dirt” or Papadopoulos’s initiative to create a back-channel bond between the Trump campaign and Vladimir Putin’s office.

There’s another reason why Mifsud could be of interest to Mueller and his investigators. In the past year, the New York Times has reported that US intelligence agencies collected information in the summer of 2016 indicating that top Russian intelligence and political officials were looking to gain influence over Trump through his advisers and that US spy agencies had intercepted calls showing that Trump campaign aides and other Trump associates had repeated interactions with senior Russian intelligence officials, perhaps unwittingly. (In June, former FBI chief James Comey, in congressional testimony, disputed the Times story disclosing contacts between the Trump aides and Russian intelligence, but he did not specify what was wrong with the article.) So Mueller is no doubt looking for possible instances of when Russian intelligence infiltrated—or tried to infiltrate—the Trump campaign, either directly or through witting or unwitting cut-outs. And the Papadopoulos episode could be a case not only of a Trump aide trying to establish a campaign connection with the Kremlin but of Russian intelligence attempting to score a contact within the Trump campaign.

Mueller’s Papadopoulos statement tells the story of one Trump campaign effort to hook up with the Kremlin. But elements of this tale still require further explanation.