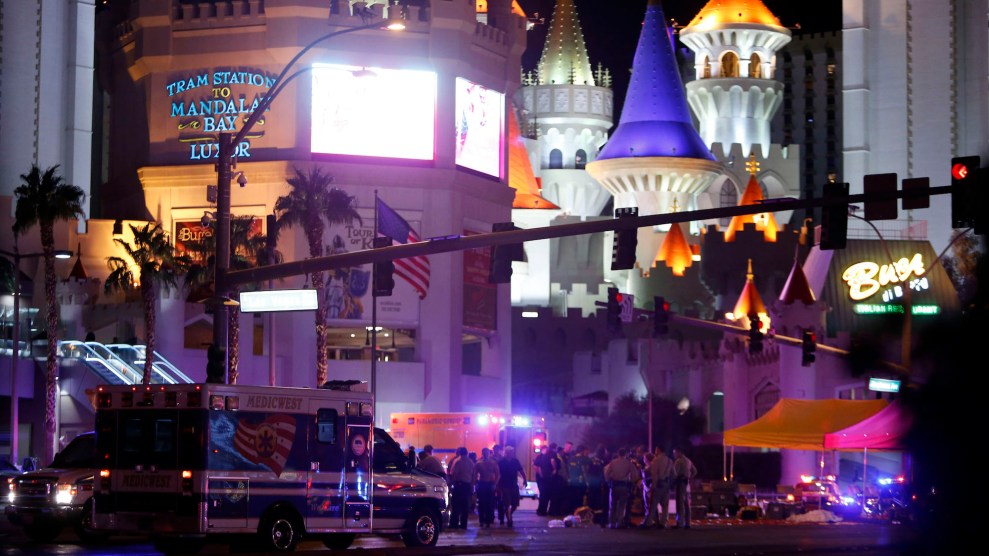 It is not yet clear whether the inaction of Laxalt, a Republican, played any role in the attack by Stephen Craig Paddock, who law enforcement officials say fired from his room in the Mandalay Bay Resort and Casino onto a crowd at an outdoor concert before fatally shooting himself.

Police said they found at least 10 weapons in Paddock’s room, but there was no immediate indication that Paddock met any criteria that would have caused him to fail a background check. Nor was it evident whether he bought any of the guns through private sales that would have been covered by the new law. (At least some of the guns came from a store called Guns & Guitars, which released a statement saying it had run all the applicable checks on Paddocks’ purchases.)

“It’s not too early to say that the gun laws in this country are killing people.”

Still, the Vegas massacre has revived criticism of Laxalt’s undermining of the new law—even as Laxalt sought support from the NRA and gun rights advocates in anticipation of a gubernatorial bid. Laxalt’s foes have rejected calls (by the White House, among others) to avoid discussion of gun laws in the wake of the massacre, insisting that the day after such an attack is a perfectly appropriate time to raise the issue.

“I don’t know where this man purchased these weapons, but I do know that if background checks were required for private gun sales, fewer of these weapons would end up in hands of people that shouldn’t have them,” says Elizabeth Becker, a volunteer with the Nevada chapter of Moms Demand Action for Gun Sense in America, which advocates stronger gun laws.

Nevada requires background checks only for firearms purchases from licensed dealers, not for so-called private transactions in which the sellers are not officially in the gun business. The background checks assess whether buyers are legally prohibited from owning guns because of past felony convictions, legally designated mental health problems, or other issues.

The 2016 ballot initiative, which Nevada voters approved by a hair (0.45 percent) in November, would have added background checks for these private gun purchases. Bankrolled by former New York Mayor Michael Bloomberg and wealthy donors in Nevada, and drafted by Bloomberg’s Everytown for Gun Safety, the measure employed a mechanism to avoid imposing new costs on the state. Background checks for private transactions would be conducted through the FBI’s National Instant Criminal Background check system, but a “point of contact” system used by local police for other required checks would remain in place.

Laxalt claimed Nevada couldn’t enforce the new law “unless the FBI changes its public position.” His critics beg to differ.

In a mid-December letter to Nevada’s Department of Public Safety, however, the FBI deemed the new background checks “the responsibility of the state.” Laxalt, already a vocal critic of the measure, seized on the letter. In a legal opinion two weeks later, he wrote that Nevada could not enforce the new law “unless the FBI changes its public position.”

Laxalt and Gov. Brian Sandoval’s offices gave no indication that they had tried to negotiate with the bureau. Nor, according to gun safety advocates, did they explore administrative options that could have allowed the law to move forward—such as emulating the approaches of states that had passed similar measures. The Democrats who control the state legislature say Laxalt and Sandoval, who is also a Republican, refused to work with them on legislative fixes.

In fact, Laxalt, who is running to replace Sandoval, boasted of his role in opposing the measure. In an April 28 speech at the NRA’s annual convention, he cited his criticism of the initiative as an example of his record of supporting gun rights. “Attorneys General,” he said, served as “the last line of defense against the Obama Administration” on gun policy.

Progressive activist Magnus says Democratic groups are now certain to raise Laxalt’s stance on background checks as a campaign issue. “It disgusts me that this man was allowed to do that,” she says. “We’re not going to let this go unanswered.”