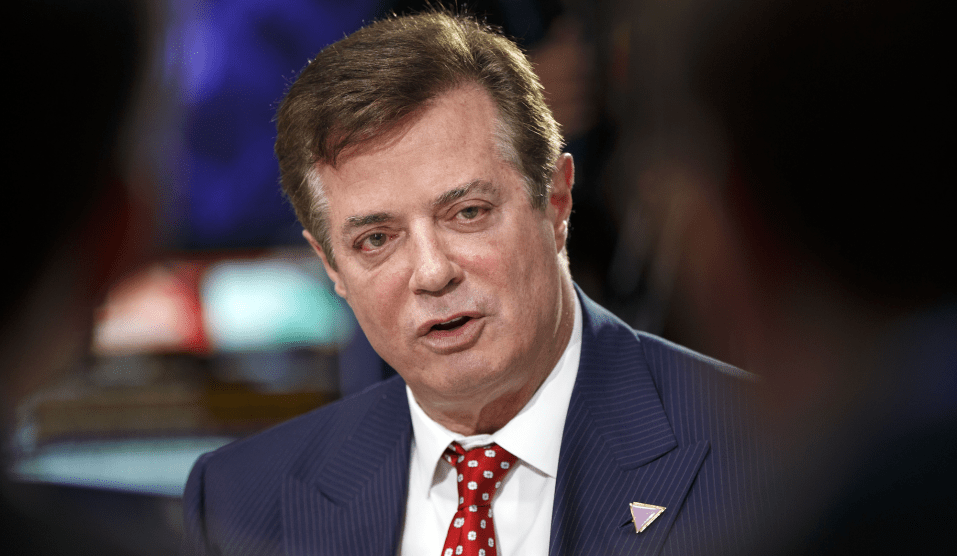 Update, 9:15 am EST: Here are the full indictments against Manafort and Gates. They list 12 charges, including conspiracy against the United States.

Paul Manafort, the former campaign chairman for President Donald Trump, is expected to turn himself in to federal authorities on Monday,  in connection with special counsel Robert Mueller’s ongoing investigation into possible collusion between the Trump campaign and Russia. Manafort’s former business associate, Rick Gates, is also reportedly expected to surrender.

The charges against Manafort and Gates are expected to be unsealed later on Monday.

Shortly after 8 am, Manafort was seen being driven from his Virginia home, wearing a suit and a brightly colored tie, as he attempted to block the view of cameras.

BREAKING: Trump's fmr campaign chair, Paul Manafort, arrives at the FBI in Washington, amid reports he was told to surrender to authorities pic.twitter.com/PdnGedL3ln

Manafort was forced to resign as Trump’s campaign chairman in August 2016 after multiple reports revealed his previously undisclosed lobbying work for deposed Ukrainian President Viktor Yanukovych and his pro-Russian political party. Mueller has reportedly made Manafort’s business dealings and possible tax violations a central focus of his investigation. The expected charges also follow reports that Mueller is working with the Manhattan US attorney to investigate possible money laundering by Manafort.

The White House has previously attempted to downplay Manafort’s role in the campaign as “very limited.”

Since news that a grand jury approved the probe’s first indictments broke on Friday evening, Trump has lashed out, accusing Democrats of using allegations of collusion to distract from the news that Hillary Clinton’s campaign partially paid for the Trump-Russia memos drafted by Christopher Steele.

Never seen such Republican ANGER & UNITY as I have concerning the lack of investigation on Clinton made Fake Dossier (now $12,000,000?),….

…the Uranium to Russia deal, the 33,000 plus deleted Emails, the Comey fix and so much more. Instead they look at phony Trump/Russia,….

…"collusion," which doesn't exist. The Dems are using this terrible (and bad for our country) Witch Hunt for evil politics, but the R's…

In July, the FBI conducted an early morning raid of Manafort’s Virginia home in search of tax documents and foreign banking records. During the raid, federal prosecutors reportedly warned Manafort to expect an indictment.

This is a breaking news report. We will update as more information becomes available.