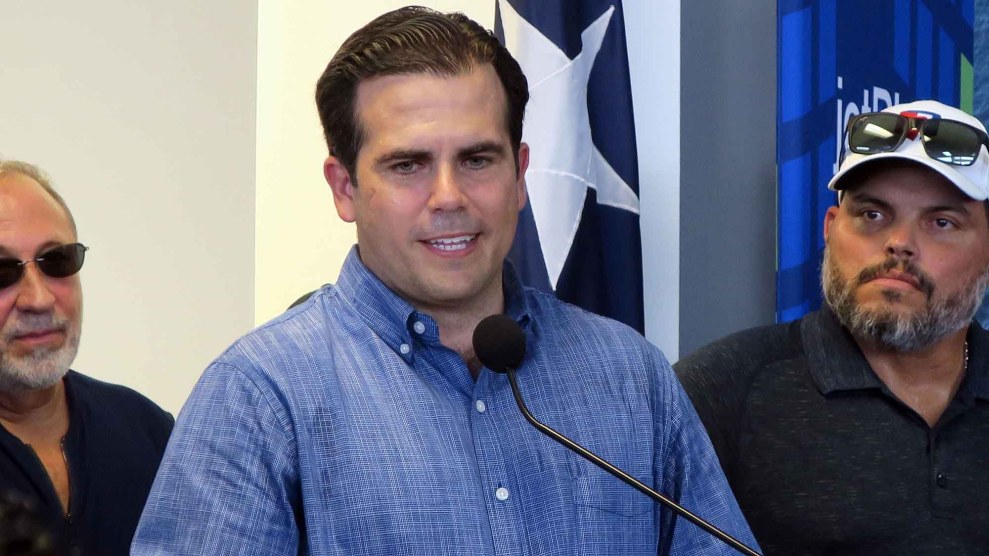 At a press conference Tuesday morning, Puerto Rico Gov. Ricardo Rosselló faced a question that is on the minds of people across the island. Why, 13 days after Hurricane Maria, are so many residents still struggling to find basic necessities, such as water, food, and fuel?

“It is a good question,” Rosselló responded. “Many things could be happening, and I don’t want to address that.” The governor said he’d rather talk about the everything the government was attempting to do to distribute supplies.

But the question remains: What is taking so long?

“Many things could be happening, and I don’t want to address that.”

I’ve spent the last three days traveling across Puerto Rico talking with people, and I’ve heard many similar stories. The government response to the devastation has been slow to non-existent. People have no running water, electricity, or ability to communicate. Getting gasoline and diesel fuel is extremely challenging. The only way to buy the limited resources available in the stores that happen to be open is to use cash, which is also tough to come by.

On Monday I went to Cabo Rojo in the southwest, where residents told me that people with serious medical conditions have no way of getting help, so the neighbors are helping neighbors get medical care and clear debris from their demolished homes. The mayor of the town told me that it took FEMA more than a week to send someone to coordinate with him and that the Puerto Rican and US governments aren’t doing enough to help him.

On Sunday, I visited people on a street in Toa Baja, a city along the island’s north coast, 30 minutes west of San Juan. They told me that ever since the government opened floodgates on a dam up the hill and flooded their neighborhood, they’ve been dealing with wastewater and dead animals pretty much on their own. And on Saturday, residents in Ciales, at mountain town 45 minutes from San Juan, were still digging mud out of their homes and the street on their own. The mayor in that town said that officials in San Juan were slow to help, poorly organized, and didn’t follow through on commitments.

“Some of them are calling themselves ‘the town of the forgotten,” Eduardo Melendez, a photojournalist with the newspaper Claridad and one of my companions, told me as we were talking to people in Ciales. “The mayor has only come [to this neighborhood] once. Nobody else.”

Rosselló on Tuesday defended the government’s response and blamed a lack of communication between local officials and the residents for the problems. He said his administration was working with the local governments to establish regional distribution sites in each of the 78 municipalities across the island. They’re also working on other ways of communicating information to residents— many of whom still lack access to reliable cell phone and internet connections—such as equipping cars and helicopters with loudspeakers. He added that despite the government’s best efforts, residents simply aren’t hearing about their options and are therefore missing out on available resources.

“Some people, even though we’ve documented the fact—I’ve personally gone on some of those missions—that we’ve delivered food and water, it hasn’t gotten to some of them,” he said. “Now, it could be for a whole host of reasons. One of them could be that they couldn’t hear it; the information didn’t get to them.”

He said the government is averaging 60 missions per day to deliver food, water, and other resources, and he defended the overall effort. “All of the assets that are deployed over here are working,” he said. “There is food being delivered.”

That all sounds nice coming from the podium in the air conditioned command center in downtown San Juan. But for people like Paula Santos Peréz, who lost all of her belongings and watched her sister’s house get washed away in a flood, it means very little. When I visited her in Ciales this weekend, she told me that if Rosselló and the other government officials were standing in front of her, she’d tell them that she and her family feel that “they only have help from God.”