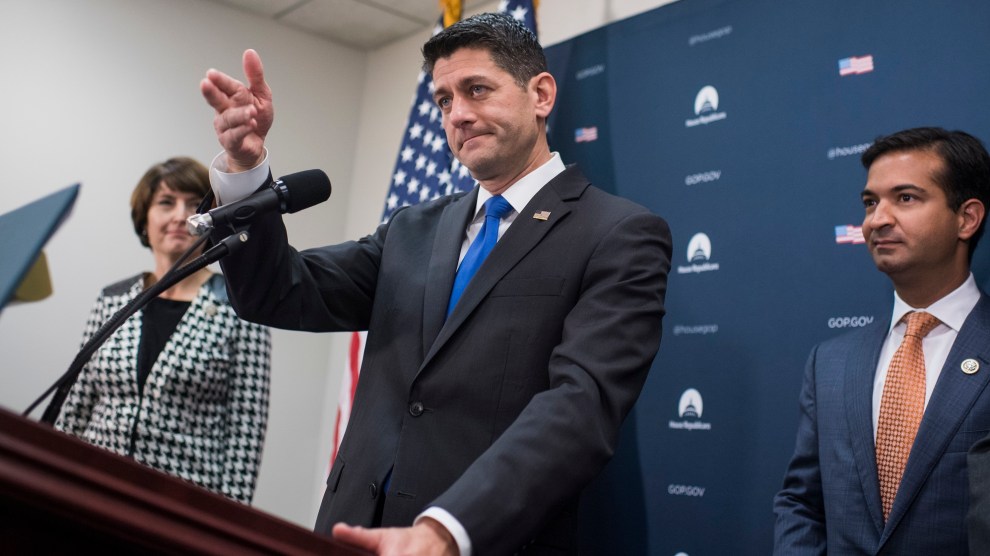 After years of railing against deficit spending, House Republicans voted on Thursday for a budget resolution that allows for $1.5 trillion of deficit spending to finance tax cuts. Nearly 80 percent of the cuts would go to the wealthiest 1 percent of Americans, according to an initial estimate from the nonpartisan Tax Policy Center.

Every Democrat and 20 Republicans voted against the budget resolution, which passed 216-212. The resolution allows Congress to fast-track tax cuts using a process known as reconciliation—meaning the Senate will only need a simple majority, instead of the 60 votes needed to overcome a filibuster.

Most of the Republican opposition came from the GOP’s plan to eliminate deductions for state and local taxes, with 11 Republicans from New York and New Jersey voting against the bill. Eliminating the deduction, which disproportionately affects well-off families in high-tax states, is the main reason why Trump’s plan would raise taxes on one in six Americans, according to the left-leaning Institute on Taxation and Economic Policy. In Maryland, nearly one in three households would see their taxes go up as the state’s top 1 percent gets a $74,470 annual windfall.

Republicans in Congress may soften the blow by providing a tax credit for property taxes, the Wall Street Journal reported on Wednesday. That change could make the tax bill more politically palatable for blue-state Republicans, but it would make the tax cuts far more expensive. Without that change, the Tax Policy Center estimates that Trump’s plan would already increase the deficit by $2.4 trillion over ten years—$900 billion more than the self-imposed limit in the budget Congress passed Thursday. If the GOP replaces the state and local tax deduction with a property tax credit, that deficit spending would balloon by up to another $700 billion.

During the Obama administration, House Speaker Paul Ryan (R-Wis.) said the United States needed to “tackle this debt crisis before it tackles us.” To address that crisis, Ryan proposed massive cuts to Medicare and Medicaid. Republicans have explained the apparent about-face on the national debt by saying their plan actually raises tax revenue by unleashing economic growth. But experts disagree with Republicans’ math. A May survey by the University of Chicago’s business school found that almost no economists believe that increased economic growth would offset the costs of Trump’s tax cuts.

On Thursday, Rep. Justin Amash (R-Mich.) was one of the few Republicans who stuck to his Obama-era position on deficit-spending. “2011-2016: Principles!” he wrote on Twitter before the vote. “2017: End justifies the means.”