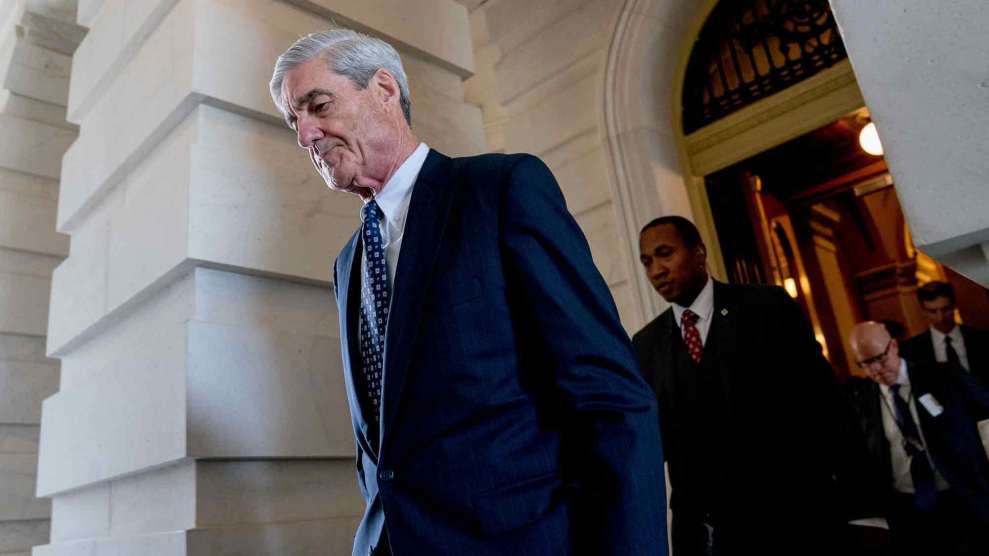 On Monday morning, shortly after special counsel Robert Mueller announced the indictments of former Trump campaign officials Paul Manafort and Rick Gates, President Donald Trump tweeted, “There is NO COLLUSION!” But soon after that, Mueller’s office released a “statement of offense” outlining one major instance of when the Trump campaign tried to collude with Russia as the Kremlin was mounting a covert operation against the 2016 election to benefit Trump.

This case involved George Papadopoulos, a foreign policy adviser for the Trump campaign, who has pleaded guilty to making false statements to FBI agents investigating the Trump-Russia scandal.

In August, the Washington Post reported that Papadopoulos had tried to set up a meeting between the Trump campaign and Russian officials. Mueller’s statement reveals that Papadopoulos, often with the knowledge of campaign officials, attempted to forge a back-channel bond with Russian officials—and he did so after there were public indications the Kremlin was behind the hack-and-dump operation targeting the Hillary Clinton campaign. The statement also suggests that he hoped to obtain Clinton emails from the Russians.

Here’s what happened. In early March 2016, Papadopoulos, a former intern and researcher at the conservative Hudson Institute in Washington who had briefly advised the presidential campaign of Ben Carson, learned that he would be a foreign policy adviser for the Trump campaign. He was living in London at the time. During a trip that month to Italy, he met a professor based in London who claimed to be well connected with Russian government officials. Papadopoulos thought that if he could cozy up to this person, it would boost his standing within the campaign.

Later, while back in London, he met with the academic, who brought along a Russian woman he introduced as a relative of Vladimir Putin. Afterward, Papadopoulos emailed his campaign supervisor that he had met with these two people and they had discussed setting up a meeting between the campaign and “the Russian leadership” to discuss US-Russia ties under a President Trump. The statement doesn’t identify the supervisor, but the Post reported in August that his supervisor was Sam Clovis, who was heading up the Trump campaign’s policy team. The supervisor replied that Papadopoulos should make no commitments but added, “Great work.”

Two weeks later, Papadopoulos attended a meeting  in Washington with Trump and other national security advisers. He told the group he had connections that could arrange a tete-a-tete between Trump and Putin. In the following weeks, Papadopopulos kept in contact with the professor and the Russian woman and discussed a meeting between the campaign and the Russian government. He kept the campaign informed of his efforts.

In April, the professor introduced Papadopoulos through email to a person in Moscow who supposedly had close ties to officials within the Russian Ministry of Foreign Affairs. He then had a series of conversations with this person about establishing “the groundwork” for a meeting between the campaign and Russian government officials. At one point, they discussed Papadopoulos getting together in London with the Russian ambassador to discuss the next steps.

In late April, Papadopoulos’ efforts took a turn. The professor (who is not named in Mueller’s statement) told him he had just returned from Moscow where he had met with senior Russian officials and learned that the Russians had obtained “dirt” on Clinton. This included, as Papadopoulos later told the FBI, “thousands of emails.” So at this time, Papdopoulos, as an official representative of the Trump campaign, was talking to a go-between with Russia about inside (and stolen) information on Clinton that Moscow possessed. The statement suggests but does not explicitly state that Papadopoulos was interested in how the campaign could benefit from this material. It also does not indicate whether these emails are related to the Democratic National Committee or John Podesta emails hacked by the Russians. It would not be until June 14, 2016, that the DNC hack would become public.

In early June, Donald Trump Jr., Jared Kushner, and Manafort met with a Russian lawyer whom they were told was bringing them negative information on Clinton as part of a secret Russian government plot to help Trump. Here’s an interesting question: Had any of them been told that Papadopoulos had heard the Russians had emails related to Clinton?

Still, the statement notes that from mid-June through mid-August 2016, Papadopoulos pursued an “off the record” meeting between one or more campaign representatives and “members of Putin’s office” and the Ministry of Foreign Affairs. On August 15, Papadopoulos’ supervisor told him, “I would encourage you” and another foreign policy adviser to the campaign “to make the trip, if it is feasible.”

By now, there was plenty of information in the public record attributing the hack of the DNC and other Democratic targets and the subsequent release of stolen emails and documents to Russian intelligence. Papadopoulos’ trip to meet the Russians never happened. But these communications show that while Putin was attempting to subvert a US election, Trump campaign officials were hoping to arrange a private meeting with Putin officials.

In the past few weeks, Papadopoulos on his LinkedIn page has asked for recommendations for a speaker’s bureau and a publisher—as if he has a story to tell. Mueller’s statement does indicate that the Trump campaign was attempting to create a secret connection with Putin’s office just as Russia was waging information warfare against the United States. Imagine how the Kremlin might have interpreted such warm and welcoming signals from the Trump campaign. This was not a knock-it-off message. It was a let’s-work-together message being sent to an adversary while it was assaulting US democracy.

The Manafort and Gates indictments may not be directly related to the question of Trump interactions with Russia. But the Papadopoulos statement is further evidence the campaign was looking to collude with Putin’s crew. As significant as the Manafort and Gates arrests are, the Papadopoulos statement is far more important for developing a public understanding of how Trump’s gang did scheme with the enemy.