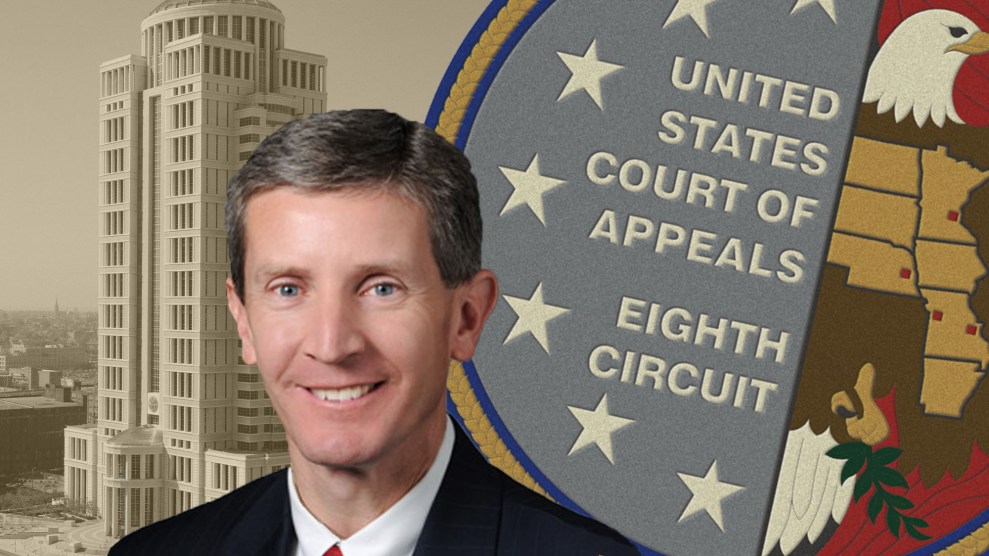 One of President Trump’s judicial nominees, Leonard Steven Grasz, is “not qualified” for the position, according to a letter sent from the American Bar Association (ABA) to the leaders of the Senate Judiciary Committee on Monday.

Grasz, a former Chief Deputy Attorney General of Nebraska who is active in pro-life and conservative causes, was nominated in August to the Eighth Circuit Court of Appeals, which oversees district courts in Arkansas, Iowa, Minnesota, Missouri, Nebraska, North Dakota, and South Dakota. The letter marks only the third time that a judicial nominee has received a unanimous “not qualified” rating from the ABA since 1989. The other two were not confirmed.

In a statement following the release of the letter, Pamela Bresnahan, who chairs the ABA’s Standing Committee on the Federal Judiciary, offered some detail about the organization’s investigation and Grasz’s poor rating.

“Mr. Grasz’s professional peers expressed concerns about his views of stare decisis, and questioned his commitment to it,” Bresnahan wrote. “Specifically, they expressed the view that he would be unable to separate his role as an advocate from that of a judge.”

Bresnahan cited one instance when Grasz’s “passionately-held social agenda” hindered his ability to make decisions objectively, pointing to a time he argued lower courts should have overruled abortion rights precedents set by the Supreme Court. “He was unable to identify the lack of objectivity that his personal convictions had created,” Bresnahan wrote.

The committee says it conducted over 200 confidential interviews with lawyers and judges “experienced with” Grasz. Some “members of the bar shared instances in which Mr. Grasz’s conduct was gratuitously rude,” she wrote, adding that many people contacted were hesitant or afraid to be interviewed out of fear of retribution.

After having served as Nebraska’s Chief Deputy Attorney General for 11 years, Grasz is now an attorney at a private firm in Omaha, where his practice includes civil and appellate litigation. Since 2015, Grasz has served on the Board of Directors of the Nebraska Family Alliance, a conservative, pro-life organization; during that time, the Alliance opposed a bill that banned workplace discrimination based on gender identity or sexual orientation, supported anti-assisted suicide legislation, and promoted gay conversion therapy.

“This is an individual who has devoted his entire career to opposing and eroding the rights of women and LGBTQ Americans,” said Dan Goldberg, Legal Director of the Alliance for Justice, a liberal judicial organization.

While serving in the attorney general’s office, Grasz defended a Nebraska statue criminalizing partial birth abortions that was later found unconstitutional by the Supreme Court. His staff fought a federal mandate to provide public funding for abortions and defended laws prohibiting public funding of abortion services. In one case, Graz argued against a woman who sought to use Medicaid to abort a pregnancy that resulted from a rape.

Like nearly half of Trump’s nominees, Grasz is a member of the Federalist Society, an influential network of over 65,000 conservative lawyers, judges, and scholars. Grasz is also a former general counsel of the Nebraska Republican Party, and, according to a Senate Judiciary Committee questionnaire, has served on multiple Republican campaign committees.

Starting in the Eisenhower administration, and for nearly five decades thereafter, the ABA’s Standing Committee on the Federal Judiciary provided advisory, non-binding evaluations of candidates for the federal bench before the White House formally nominated them. While George W. Bush pushed the ABA out of the pre-nomination process in 2001, they were welcomed back under Obama. But in March, White House Counsel Don McGahn told the ABA that the Trump administration would also not honor the tradition, writing that the White House does “not intend to give any professional organizations special access to our nominees.”

Under Trump, the ABA conducts and issues its evaluations after candidates are nominated. Grasz is the second Trump nominee the ABA has deemed unfit: Charles Barnes Goodwin, up for a seat on the US District Court for Western Oklahoma, also received a not qualified rating, though the committee’s decision was not unanimous.

Grasz is one of nearly 60 people Trump has nominated for lifetime appointments to the federal bench. So far, eight have been confirmed; four others, including Grasz, face confirmation hearings before the Senate Judiciary Committee tomorrow.