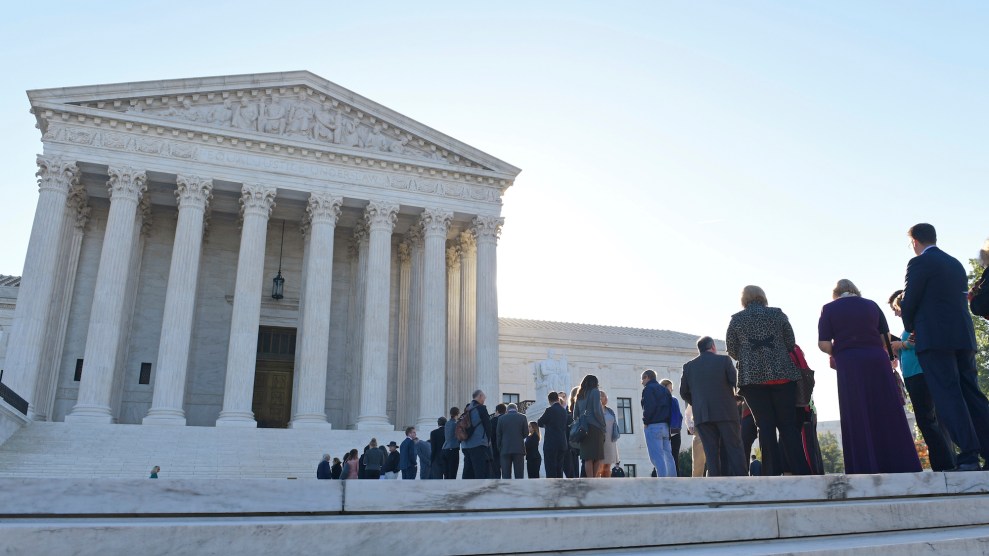 People stand in line at the Supreme Court on October 2, the first day of the new term. Susan Walsh/AP

Tens of millions Americans forfeit their right to sue their employer every time they take a job. In 2012, Sheila Hobson and three coworkers at Murphy Oil, a gas station and convenience store chain, learned they were among them. After allegedly failing to get paid for overtime work, Hobson and her colleagues took their employer to court. But when they had first been hired, they had been required to sign an agreement forfeiting their right to sue Murphy Oil and instead settle disputes through individual arbitration hearings. A federal court in Alabama found that Hobson and her colleagues didn’t have the right to sue, upholding the agreement they’d signed.

On Monday, the Supreme Court opened its fall term with National Labor Relations Board v. Murphy Oil USA, and two similar cases, that will determine whether companies can force workers like Hobson to sign away their right to file collective suits. The decision in the cases, which were heard jointly, has the potential to push millions more workers into individual arbitration hearings that lack many of the protections of the US legal system.

Following the Equifax hack, consumers across America were reminded that buying a company’s products often means giving up the right to class-action litigation. Upon signing up for these products, customers are required to forfeit this right and instead agree to go before arbitrators hired by corporations. Unlike the US court system, arbitration is conducted in private, making it difficult for others to learn of abuses. There is generally no right to appeal.

In rulings in 2011 and 2013, the Supreme Court upheld corporations’ right to use “class-action waivers” that force consumers into individual arbitration. Murphy Oil will determine whether employees can also be bound by those waivers.

In the early 1990s, less than 4 percent of companies surveyed by the Government Accountability Office, an independent government agency, used mandatory arbitration for their employees. Today, more than half of private-sector non-union workers are subject to it, according to a report published last week by the liberal Economic Policy Institute. Forty-one percent of those employees—24.7 million workers—have also waived their right to class-action litigation.

Alexander Colvin, an expert on arbitration at Cornell University and the author of the report, expects more companies to add these waivers if the Supreme Court declares them legally enforceable. Companies have a significant incentive to do so. In 2015, Colvin found that employees win 21 percent of arbitration cases, compared to 57 percent of cases in state court. (Employees are far less likely to pursue grievances when they’re subject to arbitration: Colvin estimates that workers are 50 times likelier to sue than to arbitrate.) Workers also get less money when they’re successful: $109,000 in arbitration compared to $575,000 in state court. Colvin says lawyers he speaks with are less likely to represent workers bound by arbitration because they take a share of the damages.

During Monday’s oral arguments, Justice Stephen Breyer framed the case as an attempt to “radically” change labor law. Justice Ruth Bader Ginsburg agreed, saying, “There is no true bargaining. It’s the employer says, ‘You want to work here, you sign this.'” She compared the class-action waivers to “yellow-dog contracts,” which banned workers from joining labor unions until they were blocked by Congress in 1932.

The main question in Murphy Oil is whether the National Labor Relations Act (NLRA) of 1935, which protects collective worker actions that provide mutual benefit, blocks employers from mandating individual arbitration. Breyer and the other liberal justices saw the law as clearly giving workers a right to joint actions, whether they be group arbitration or class-action lawsuits. Chief Justice John Roberts countered that Breyer’s interpretation was too simple, because the language of the NLRA doesn’t clearly preclude mandatory arbitration.

Katherine Stone, a law professor at the University of California, Los Angeles, who studies the history of arbitration, says arbitration was initially created in order to allow workplace disputes to be settled by leaders in the same industry, who would understand the issues at hand. Today, Stone says, the argument for arbitration has changed: It’s now described by proponents as a means for faster justice. But as Justice Sonia Sotomayor suggested on Monday, there is nothing particularly efficient about forcing one group action to be broken into 100 separate arbitration hearings.

Nor is it feasible for employees to hire a lawyer to try to recover small damages in individual suits. As the late federal judge Richard Posner wrote in 2004, “The realistic alternative to a class action is not 17 million individual suits, but zero individual suits, as only a lunatic or a fanatic sues for $30.”

Like so many controversial cases, Murphy Oil is likely to come down to frequent swing Justice Anthony Kennedy. In a bad sign for workers, Kennedy said the fact that employees can use the same lawyer for individual arbitration hearings means they effectively constitute collective action. The liberal justices consistently defended workers’ right to act collectively, while Roberts and Justice Samuel Alito were more critical. Conservative Justices Neil Gorsuch and Clarence Thomas remained silent.

Sharon Block, the director of Harvard’s Labor and Worklife Program and a former NLRB board member, is concerned that Murphy Oil could be used to stamp out other workplace rights. Block and Benjamin Sachs, a Harvard law professor, recently highlighted how the Trump administration’s brief casts doubt on the legal protections for collective actions outside of a traditional union context. That interpretation, Block says, could prevent workers from jointly asking for wage increases or joining worker centers that advocate for higher wages. Those rights are particularly important as union membership declines.

For Colvin, the case comes down to whether employers “basically get to set up the rules of how things are going to work” by sticking “whatever they want into contracts.” He cites Uber, which has labeled full-time drivers as independent contractors and blocked them from disputing that label in open court through mandatory arbitration agreements. In his view, Congress should decide how arbitration is adopted across the country by coming up with a fair system for workers to dispute workplace abuse. “But they really haven’t done that,” Colvin says. “They just really kind of, I think, stood down on the job.”