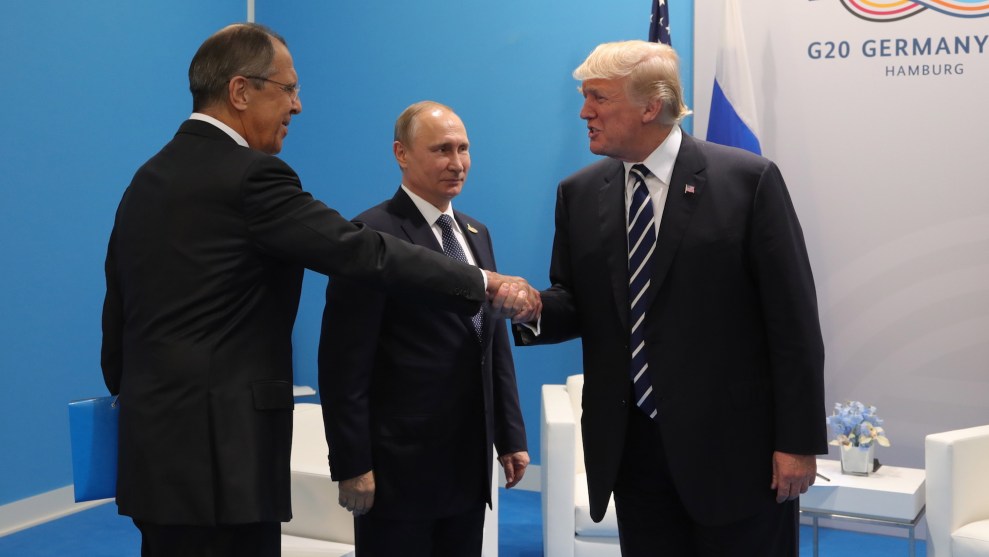 Russia's President Vladimir Putin looks on as Russia's Foreign Minister Sergei Lavrov shakes hands with US President Donald Trump during a meeting on the sidelines of the G20 summit in Hamburg on July 7.Mikhail Klimentyev/Russian Presidential Press and Information Office TASS via ZUMA Press

The White House has blown by an October 1 deadline for beginning to implement new sanctions targeting Russia, drawing concern in Congress that President Donald Trump is planning to ignore parts of a bill he grudgingly signed in August.

“The delay calls into question the Trump administration’s commitment to the sanctions bill which was signed into law more than two months ago, following months of public debate and negotiations in Congress,” Sens. John McCain (R-Ariz.) and Ben Cardin (D-Md.) said in a joint statement Wednesday. “They’ve had plenty of time to get their act together.”

The bill required the Trump administration to issue by October 1 “regulations or other guidance to specify the persons that are a part of, or operate for or on behalf of, the defense and intelligence sectors of the Government of the Russian Federation.” The administration has yet to do so. The Treasury and State departments also have not issued guidance on their plans for imposing the measure, a Senate aide said. The aide said that members of the White House’s National Security Council have assured senators that they are “getting to” the sanctions and “it’s gonna happen.” But lawmakers are wary.

Cardin and McCain said the White House has also ignored a September 28 letter they sent asking for information on implementation plans. “In addition to the administration’s lack of responsiveness on this deadline, there does not appear to be a significant diplomatic effort to engage our allies in Europe and lead an effort to increase pressure on Moscow,” they said in their joint statement. “Congressional intent was clear, reflected in the overwhelming bipartisan majority in favor of the legislation.”

The legislation’s primary thrust was to prevent the president from removing sanctions without congressional approval. Trump has mulled unilaterally rescinding earlier US sanctions imposed on Russia after its incursion into Ukraine. The new sanctions bill passed both chambers of Congress overwhelmingly amid bipartisan concern about Trump’s frequent praise of Russian President Vladimir Putin and congressional and Justice Department investigations into whether the Trump campaign coordinated with Russia during last year’s presidential race.

Trump opposed the new legislation, agreeing to sign it only after it became clear Congress could override his veto. But he also issued a presidential signing statement suggesting he might ignore what he said were “a number of clearly unconstitutional provisions” in the legislation. “My administration will give careful and respectful consideration to the preferences expressed by the Congress in these various provisions and will implement them in a manner consistent with the President’s constitutional authority to conduct foreign relations,” the statement said. The White House did not respond Wednesday to questions about its plans concerning the Russian sanctions.