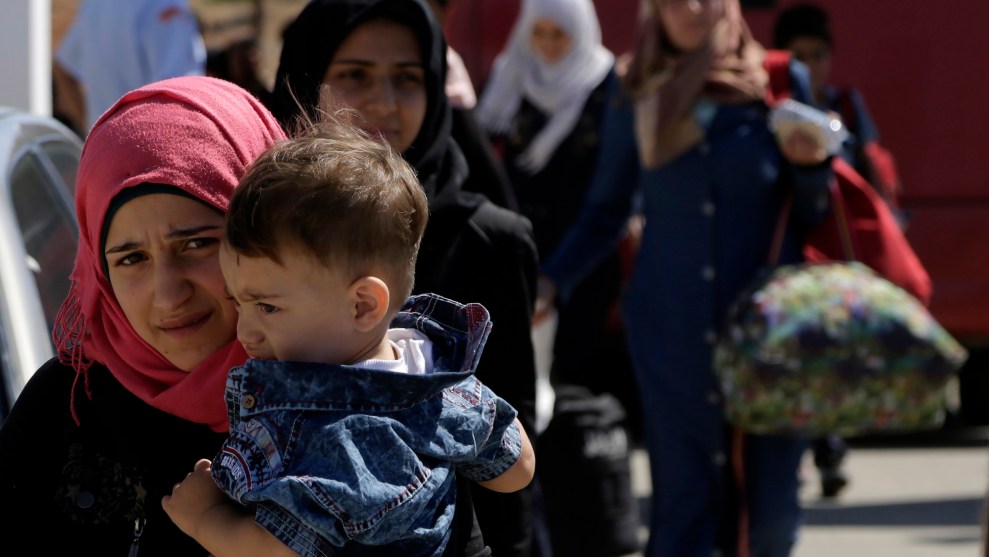 Women and a child migrant from Syria walk towards a refugee camp in Cyprus last month. On Tuesday, the Trump administration effectively banned most Syrian refugees for an additional 90 days. Petros Karadjias/AP

Last month, President Donald Trump cut the annual cap on the number of refugees the United States will admit to the lowest level on record. The new limit of 45,000 refugees per year is less half the 110,000-person limit set by Barack Obama in 2016. But it looks like the administration may keep the actual number of refugees far lower than that.

In June, the Supreme Court ruled that the Trump administration could enforce a March executive order preventing almost all refugees from entering the country for 120 days. On Tuesday, as the 120-day period expired, the Trump administration issued a new executive order that effectively banned most refugees from 11 countries for an additional 90 days. Those refugees, the administration stated in a memo, will not be admitted unless they can prove that doing so is in the “national interest” of the United States. Other refugees will be allowed again but will be subject to increased vetting. Globally, there are now 22.5 million refugees who have fled their home countries, more than at any time since the aftermath of World War II.

Melanie Nezer, a senior vice president at HIAS, a Jewish group that helps resettle refugees, says the announcement means that “it’s highly unlikely that the administration wants to get to 45,000.” Kay Bellor, a vice president at the Lutheran Immigration and Refugee Service, agrees, saying, “It’s hard in my most optimistic view to see how we’re going to make 45,000.” Bellor asks, “Why would an administration take completely unnecessary steps, but for being motivated to really hamper and slow down and cripple the program?”

On a call with reporters Tuesday, senior Trump administration officials refused to name the 11 countries they are singling out, citing security concerns. Another potential motivation for obscuring them became clearer when Reuters reported that nine of the 11 are majority-Muslim nations. The countries are reportedly Egypt, Iran, Iraq, Libya, Mali, North Korea, Somalia, South Sudan, Sudan, Syria, and Yemen, along with Palestinians living in those countries.

Some of the refugees from the majority-Muslim nations on that list are religious minorities. Still, Eric Schwartz, the president of Refugees International, said in a statement that Trump’s refugee decision “will largely be seen as another unreasonable ban that primarily affects Muslims.” He called the decision “a tragic example of evidence-free policy making.”

“It’s hard in my most optimistic view to see how we’re going to make 45,000,” says Kay Bellor, a vice president at the Lutheran Immigration and Refugee Service.

The 11 countries account for more than 40 percent of refugees admitted into the United States in the last fiscal year. Administration officials declined to say whether refugees from these countries could be banned outright after the new 90-day review period ends.

After Trump cut the refugee cap last month, Hans van de Weerd, a vice president at the International Rescue Committee, told Mother Jones that “it’s one to thing have a ceiling,” but the real test was: “Will the refugee arrival process resume as normal?” He added the next step was staying on the “administration’s back to make sure that every single refugee” allowed under the reduced cap would be let in.

Tuesday’s announcement shows how unresponsive the Trump administration is likely to be. The Department of Homeland Security now plans to collect more information from refugees during the application process, step up efforts to identify fraud, and suspend a program that allows family members to join refugees who are already in the United States. The administration is also seeking to collect details on where refugees have lived for the past 10 years—up from five—according to a State Department memo reviewed by Reuters.

The changes come despite the fact that vetting procedures have significantly expanded since 9/11. Refugee advocates say that refugees are now screened more intensively than any other group seeking entry to the country. It currently takes 18 to 24 months for refugees to get to the United States after they are referred by the United Nations High Commissioner for Refugees. Christopher Boian, a public information officer for the UNHCR, says that the refugees who do end up in the United States tend to be the most vulnerable ones, such as victims of torture or very young children.

Overall, Nezer says the changes amount to telling refugees that they can come to the United States, “but in reality you’re never going to get through this process. Or if you do, it’s going to take five years.”

Since World War II, the United States has been considered the world leader in protecting refugees. Nezer says that’s done now. “It’s really insidious,” she says. “I think the administration should just come out and say again, ‘Well, we’re just extending the ban.’”

A Wednesday report from the New York Times suggests Trump’s chief of staff, John Kelly, would have preferred it that way. As the administration debated the refugee cap, Kelly was asked what number he supported. He said if he were in charge, it would be somewhere between zero and one.