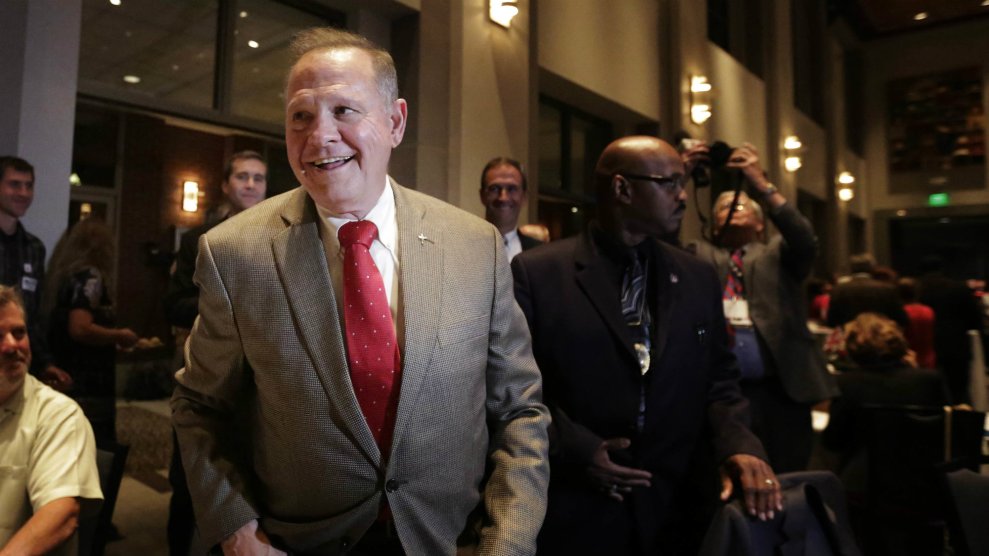 Roy Moore is still using a photo of Sen. Mike Lee in his fundraising emails—despite that fact that the Utah Republican asked the former judge now running for the US Senate in Alabama to stop doing so in the wake of allegations that Moore once initiated a sexual encounter with a 14-year-old girl.

Shortly after the Washington Post first reported this story on Thursday, Moore, a Republican, sent out an email asking supporters for money. The message touted Lee’s endorsement, as well as endorsements from Republican Sens. Ted Cruz (Texas) and Rand Paul (Ky.). Lee subsequently requested that Moore remove him from future pitches. According to the Salt Lake Tribune, Lee said through a spokesman that if the allegations against Moore are true, “Moore should resign.”

But when Moore sent out another fundraising email on Friday, Lee’s face still graced the appeal. This email—which blamed the “Obama-Clinton Machine” for spearheading a “vicious and nasty round of attacks” on Moore—didn’t mention Lee’s name. But it prominently featured Lee’s image, suggesting the Utah senator is still standing behind Moore.

The latest Moore email was intriguing on another level. Its headline reads, “We are in a spiritual battle.” And the solicitation suggests that the recent Post story was part of a diabolical scheme targeting Moore. With such language, Moore’s campaign was trying to push a button for evangelical voters.

The phrase “spiritual battle” is rather close to the fundamentalist Christian concept of “spiritual warfare.” That is the notion that the world is basically defined by the titanic struggle between God and Satan and that the events of daily life are part of this clash, meaning Moore’s latest imbroglio is no mere case of a politician being hindered by reporting on his past behavior. No, something much bigger is afoot.

The forces of evil are on the march in our country.

We are are in the midst of a spiritual battle with those who want to silence our message.

The forces of evil will lie, cheat, steal—even inflict physical harm—if they believe it will silence and shut up Christian conservatives like you and me.

Their goal is to frustrate and slow down our campaign’s progress to help the Obama-Clinton Machine silence our conservative message.

That’s why I must be able to count on the help of God-fearing conservatives like you to stand with me at this critical moment.

Without saying it explicitly, Moore is essentially asserting that the Post and anyone echoing or reinforcing its expose are in cahoots with the devil. This is a message designed for those who already know the truth.

Moore’s gambit seems rather obvious. His brother has compared his current predicament to the persecution of Jesus Christ. And now his campaign is signaling evangelicals that they need to have his back—and give him money—in his fight against the satanic forces that have somehow orchestrated a damaging news story based on 30 sources.

This raises the question: are Lee and other GOPers backing away from Moore in league with Beelzebub? Perhaps Moore’s next fundraising email will provide an answer.