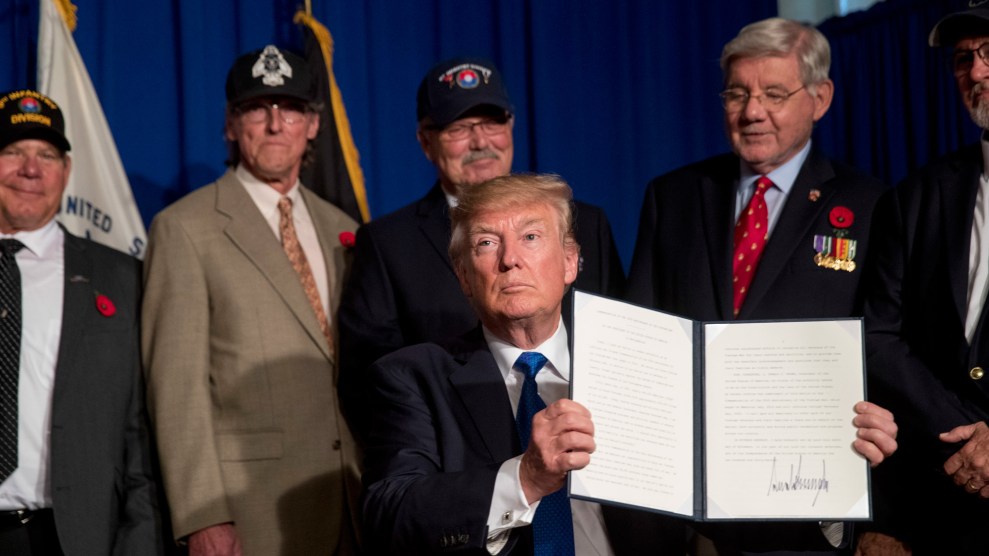 President Donald Trump, surrounded by Vietnam veterans, holds up a proclamation he signed commemorating the 50th anniversary of the Vietnam War.Andrew Harnik/AP

Long before Donald Trump became commander-in-chief of the United States military, he was promising to quickly “fix” the Department of Veterans Affairs.

One of the reasons I am no fan of John McCain is that our Vets are being treated so badly by him and the politicians. I will fix VA quickly.

On Thursday, the White House sent out a fact sheet cheering Trump’s efforts to bring “urgently needed accountability and reform to the VA,” and the “tremendous progress” the administration has achieved in “a short period of time.” The efforts to date echo portions of a 10-point plan Trump issued during the campaign: Among other things, he said he would use presidential power to “remove and discipline the federal employees” who fail to help veterans, create a 24/7 hotline to deal with veterans’ complaints, and ensure that “every veteran has the choice to seek care at the VA or at a private service provider of their own choice.”

There’s been progress, veterans groups say, although some of it was underway before Trump took office. Other successes are attributable to the work of the relatively bipartisan House and Senate Veterans’ Affairs committees. “One of the few areas Congress has been productive has been on veterans,” says Allison Jaslow, executive director of Iraq and Afghanistan Veterans of America. “And, of course, the president has benefited from that and has been able to sign some bills into law.”

Trump’s own accomplishments are more of a mixed bag. “His veterans stuff is not like the Wall,” says Joseph Chenelly, executive director of AMVets. “He’s not failing in our opinion.”

Let’s take a closer look at some of the changes since January.

An Obama holdover hired: Much to the surprise of veterans groups, Trump chose David Shulkin as secretary of the Department of Veterans Affairs and tasked him with reforming what he once called “the most corrupt agency in the United States.” Shulkin, the only cabinet member to come from the Obama administration, had spent the previous two years overseeing the agency’s health care system as Undersecretary for Health. Trump’s transition team had considered “at least 100” candidates and even offered the job to former Air Force surgeon and Cleveland Clinic CEO Toby Cosgrove. (Cosgrove declined.) Veterans groups opposed other names under consideration—including Sarah Palin and Fox News contributor Pete Hegseth, a former CEO of Concerned Veterans of America, a Koch Brothers-backed group that aimed to privatize the VA health system.

A move toward more accountability: Trump gave Shulkin and future VA secretaries new authority when, in June, he signed into law legislation that facilitates the firing of employees who engage in misconduct and helps protect helps protect whistleblowers. This long-sought accountability law, viewed by Shulkin and other supporters as a step toward reforming the VA, followed years of scandals, including veterans dying while waiting for access to medical care.

The White House claims in its fact sheet that the new standards have led to the firing of 1,163 employees and suspension of 387 others as of November 7. Notably, in September, the VA fired Brian Hawkins, who served as director of the VA Medical Center in DC, a second time. He was first fired in July, three months after a scathing inspector general’s report found Hawkins had overseen hospitals beset by the “highest levels of chaos.” But an appeals board for federal employees delayed his removal, pending further review. (Now, if only he would demand more fiscal accountability from the Pentagon.)

The passage of the @DeptVetAffairs Accountability and Whistleblower Protection Act is GREAT news for veterans! I look forward to signing it! pic.twitter.com/xNSEW7N3zd

More money—for some things: In May, the White House proposed a 6 percent increase in the VA budget, includes an increase of more than $13 billion for the agency’s “choice” program—which allows veterans to opt for private health coverage. Yet the proposal also slashed $3.6 billion in veteran benefits by, among other things, ending the Individual Unemployability program, which gives payments to disabled veterans struggling to find work as a result of injuries incurred during their service. Veterans groups slammed the proposal—one deemed it “dead on arrival,” and the VA eventually backed away from cutting the benefits.

That veterans hotline: In July 2016, Trump promised vets a “private White House hotline” to field their complaints 24 hours a day. He said he would even answer it himself if he had the chance. But it took months after Trump’s inauguration to get the initiative off the ground. The VA soft-launched the hotline in June at a cost of $190,000, according to Military Times, and Sen. Jon Tester (D-Mont.) wrote to the agency in October complaining that the line had logged more than 20,000 calls and was routing them to local VA offices—which are understaffed and “do not have the ability to address the additional casework in a timely manner.”

More access to private health insurance: During the campaign, Trump pledged to give vets the freedom to choose private medical providers, a move that would cost $100 billion by 2034 if not managed properly, according to a report by the Commission on Care established by Congress. During the now-infamous rally in Alabama, the one at which he criticized NFL players who knelt during the national anthem, Trump also said: “Can you imagine going to your doctor and having him say you’ll have to wait for 11 days? If I have to wait for two seconds, I would go crazy…And now they go, right outside, they go to a doctor in the area; we pay the bill, and it’s the least expensive thing we can do and we save everybody’s life and everybody’s happy.”

Conservative groups have long lobbied for the expansion of private veteran care, but this puts them at odds with all of the major veteran groups, which oppose privatization. Even Shulkin has said he doesn’t support it.

The Veterans Choice Program was established in 2014 in response a scandal in which government officials covered up extensive wait times at VA medical facilities. Vets are now allowed to seek private care if they live more than 40 miles from a VA clinic or have waited more than 30 days for an appointment. But the program doesn’t necessarily mean they’ll see a doctor faster. The Government Accountability Office found in a preliminary analysis that veterans referred through the choice program waited up to 81 days for routine care.

In August, Trump signed a $3.9 billion funding bill that gave the VA an extra $2.1 billion to maintain the choice program, hire more providers, and open 28 new medical facilities. But the bill was in response to an unforeseen budgetary shortfall that threatened services for veterans. When Congress approved this emergency funding, it was supposed to keep the choice program afloat through February 2018. But in September, the VA informed the Associated Press that the money may run out before year’s end.

A new ban on transgender troops: Last year, the Pentagon ended a ban on transgender people serving openly in the military. That changed in July, when Trump, in a sudden series of tweets, announced his intent to bar transgender service members “in any capacity in the U.S. military.” The move drew the ire of civil rights groups and transgender military personnel and veterans. Retired Army Col. Sheri Swokowski recently told Mother Jones she was shocked by the president’s tweets. “Today I’m the highest-ranking out trans veteran in the United States,” Swokowski says, “but I often look back and wonder how much better an officer, not to mention human being, I might have been had I been allowed to transition while serving.” A legal battle over Trump’s policy continues, leaving thousands of trans service members wondering what’s next.

The Forever GI Bill: On August 17, Trump signed legislation that gives veterans another $3 billion for educational assistance over 10 years. A combination of 18 different bills, Forever GI ends a 15-year expiration date for vets to take advantage of their benefits, allows spouses and children of service-members killed on duty to qualify, and extends tuition reimbursement to vets in the event their schools close. “That’s a pretty big win,” says AMVets’ Chenelly, “but 100 percent legislative.”

Happy Veterans Day to ALL, in particular to the haters and losers who have no idea how lucky they are!!!