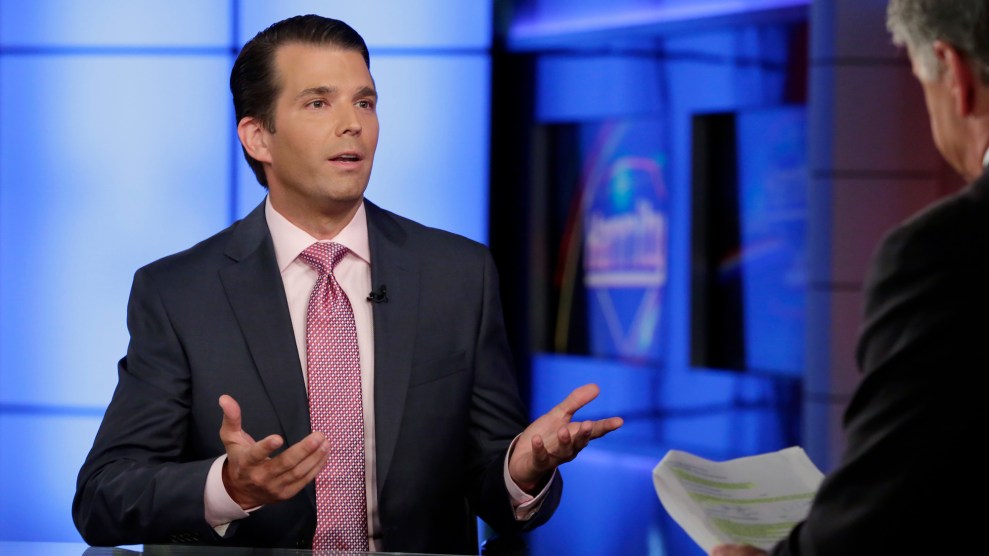 Donald Trump Jr. seemed flummoxed by a direct message he received from the WikiLeaks Twitter account on September 20, 2016. After the group contacted him, Trump emailed several senior Trump campaign officials to say he had received “a weird twitter,” according to a person familiar with the email. “Not sure if this is anything,” Trump Jr. wrote in the message, which has not previously been reported.

The source, who did not share the entire email with Mother Jones, said the email showed Trump Jr. was unsure if the message he received from WikiLeaks was real. Yet the email, along with his interactions with the WikiLeaks account over the following weeks, also shows how eager Donald Trump’s eldest son was happy to collaborate with the group led by Julian Assange. Putting aside any doubts about the legitimacy of the query he received, Trump Jr. immediately offered to help WikiLeaks, which had alerted him to the impending launch of a website detailing ties between his father and Russia and asked him whether he had “any comments.” (After the election, the site’s creator, Bill Buzenberg, began working with Mother Jones on reporting related to the Trump-Russia investigation.) “Off the record I don’t know who that is, but I’ll ask around,” Trump Jr. responded about 12 hours after receiving the message. “Thanks.”

Trump Jr.’s correspondence with WikiLeaks, reported earlier this month by The Atlantic, is among a long list of once-secret contacts between Donald Trump’s inner circle and Russian officials or allies during the 2016 campaign that have been unearthed by government investigators and journalists. Trump Jr.’s exchanges with the group came after WikiLeaks in July released emails stolen from the Democratic National Committee and prior to the organization’s October dump of emails hacked from the Gmail account of John Podesta, Hillary Clinton’s campaign manager. American intelligence agencies concluded that Russian government hackers stole the DNC and Podesta documents and then passed them, perhaps indirectly, to WikiLeaks for distribution.

Trump Jr. corresponded with the WikiLeaks account over a period of at least three weeks, spanning from late September to October 14. On October 3, he asked the group for information about its pledge to release new documents damaging to Clinton. (The group did not respond.) Once the group began dribbling out the Podesta emails, he appears to have complied with WikiLeaks’ requests that he and his father promote the release of the hacked emails on Twitter. On October 12, just 15 minutes after the group asked Trump Jr. to promote a trove of WikiLeaks documents, Trump Sr. tweeted that the media was ignoring the group’s revelations. Two days later, Trump Jr. tweeted a link the group had suggested he post.

By the time WikiLeaks reached out to Trump Jr., he had already made at least one bid to obtain information from Russia on Clinton. With his brother-in-law, Jared Kushner, and former Trump campaign chairman Paul Manafort, Trump Jr. attended a June 9 meeting with a Russian attorney who he was told would provide “dirt” on Clinton as “part of Russia and its government’s support for Mr. Trump.” The lawyer, Natalia Veselnitskaya, says that at the meeting Trump Jr. promised that if his father won the election, the elder Trump would consider repealing a law targeting Russians accused of human rights abuses with sanctions.

The email shows how eager Donald Trump’s eldest son was to collaborate with the group led by Julian Assange.

Trump Jr. corresponded with WikiLeaks weeks after his father’s longtime adviser Roger Stone claimed that he had inside information on the organization’s plans to release information that would hurt Clinton. In an August 2016 speech in Florida, Stone said he had “communicated with” WikiLeaks founder Julian Assange and that there would be more leaked Clinton documents coming. Two weeks later, Stone tweeted that it “will soon the Podesta’s time in the barrel.” That tweet came six weeks before WikiLeaks released hacked emails from Podesta’s account. The group dumped the first batch of Podesta emails immediately after news broke about an Access Hollywood tape in which Donald Trump bragged about sexually assaulting women. WikiLeaks appeared to be attempting to distract from coverage of the tape to help Trump.

Despite these indications of ties between Trump backers and WikiLeaks, Trump Jr.’s “weird twitter” email suggests that he did not have direct communication with WikiLeaks prior to September 20. But the message does not clear up whether other Trump advisers were in touch with the group. Trump Jr.’s email went to Steve Bannon, Kellyanne Conway, campaign digital director Brad Parscale, and Kushner. Documents provided to Congress do not include records of any responses to Trump Jr.’s email, the source said.

Trump Jr.’s lawyer, Alan Futerfas, told The Atlantic that “we have no concerns about these documents and any questions raised by them have been easily answered in the appropriate forum.” Futerfas said last week that he was traveling and unable to comment.

The disclosure of Trump Jr.’s correspondence with WikiLeaks has caused particular complications for Kushner, who in July told the Senate and House intelligence committees that he did not know of contacts between the Trump campaign and the group. Kushner, however, not only received Trump Jr.’s email mentioning contact with the group but forwarded it to Hope Hicks, the campaign’s spokeswoman.

The Trump Jr. email is just one of a growing list of Russia-related items Kushner has failed to disclose. In his initial application for a security clearance, Kusher neglected to mention meetings with the Russian ambassador and the head of Russia’s state-owned VEB Bank, among other foreign officials. Kushner blamed the omissions on an employee submitting the form prematurely. On his financial disclosure form, Kushner did not disclose significant debt. The heads of the Senate Intelligence Committee have also rebuked Kushner for failing to tell them about his use of a personal email account.

Most recently, in a letter to Kushner’s lawyer Abbe Lowell last week, Sens. Chuck Grassley (R-Iowa) and Dianne Feinstein (D-Calif.), respectively the chairman and ranking Democrat on the Senate Judiciary Committee, said that in documents provided to the panel, Kushner failed to disclose a series of Russia-related matters, including his knowledge of a “Russian backdoor overture and dinner invite” to the Trump campaign last year.

According to reports, that overture came from Aleksander Torshin, a former Russian senator and senior official at Russia’s central bank who is close to Russian President Vladimir Putin and who has been accused of ties to a Russian organized crime group. Torshin, who also heads a Russian pro-gun group, hoped to meet with then-candidate Trump at a National Rifle Association convention in Louisville, Kentucky, in May 2016. Trump did not meet with Torshin there, and after taking office, he canceled a planned meeting with Torshin at the National Prayer Breakfast in Washington. Torshin did, however, get face time with a Trump at the NRA confab: He met with Donald Trump Jr.