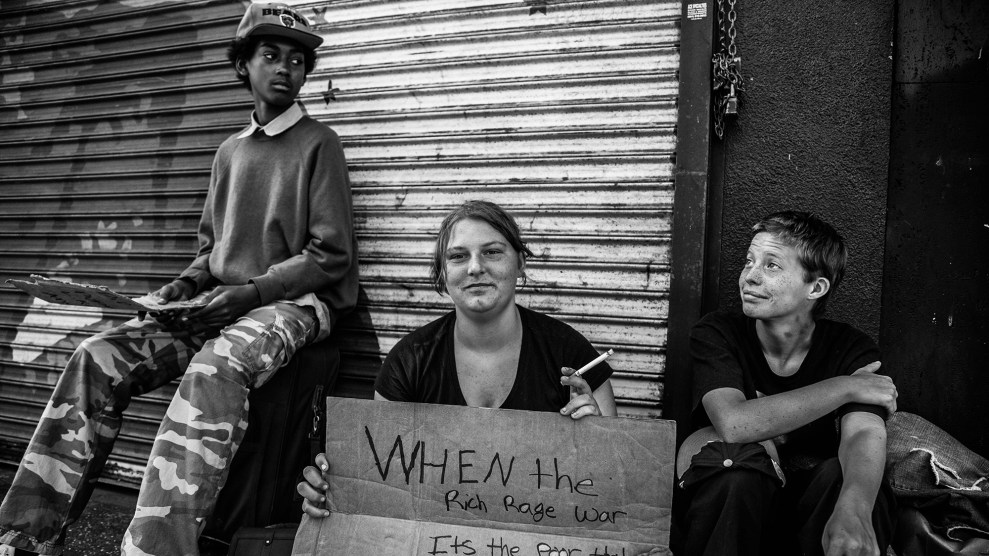 In Hollywood, 75% of the homeless population were under the age of 21 in 2014. Joshua Thaisen/ZUMA

Nearly 4.2 million kids and young adults without a parent or guardian are homeless across the United States over the course of a year. A new study from the University of Chicago revealed the startling statistic this week, focused specifically on homeless unaccompanied youth between ages 13 and 25—a population that until now has rarely been studied comprehensively.

The “Missed Opportunities: Youth Homelessness in America” report, published Wednesday in the Journal of Adolescent Health, offers a rare understanding of the scale of youth homelessness in the US. The national study surveyed more than 26,000 people, and while similar studies in the past have focused on students enrolled in public schools or counted kids and young adults unaccompanied by an adult on a single sample night, this survey sought to capture for the first time all the unaccompanied kids and young adults who might be living on the street, couch-surfing, or staying temporarily with others throughout the course of an entire year.

Matthew Morton, a research fellow at the University of Chicago and lead author of the study, admits that he and his team don’t know exactly why the odds of homelessness are so much higher for black youth. “We know that African American youth are also disproportionately affected by school suspensions, by incarceration, and by foster care placements,” he tells Mother Jones. “All three of those are related to experiences of homelessness. Just that fact alone that black youth are overrepresented in those circumstances is probably a big part of why they end up at greater risk of homelessness.” Morton adds that black neighborhoods may also have more limited services available for those going through stints without housing.

As for LGBT youth, Morton notes that the heightened risk may come from whether they are accepted inside or outside the house, though he cautions against simplifying the experience. “In some cases, you have a moment when a young person comes out and that’s a defining moment and maybe they are not accepted and are kicked out of the house. For a lot of young people, that’s not the case,” he says. “They might be bullied outside the home or in their schools.”

It’s important to study the population, he argues, because experiences with homelessness put kids and young adults at a higher risk of substance use and abuse, mental health difficulties, dropping out of school, and unemployment.

“Young people simply cannot succeed if they are worried about where they are going to sleep the next night,” Morton says.  “Youth homelessness is not an event,” he adds. “It’s not something usually where you have a young person who is stably housed one day and then the next day they are on the street. It’s often that young people have adversity over time that accumulates to first runaway episodes or couch surfing and extends into deeper forms of homelessness over time if those issues aren’t resolved if young people don’t get the support and services that they need.”