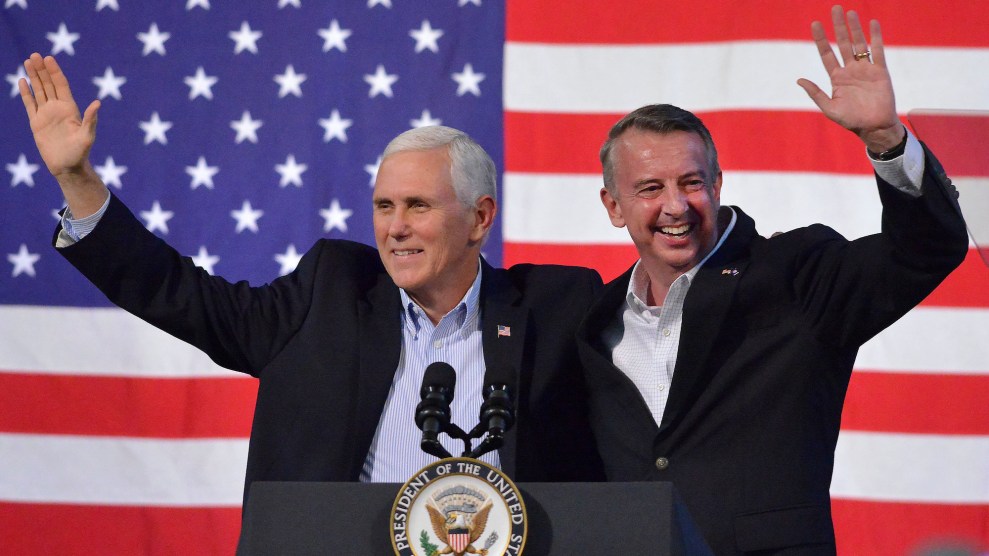 Virginia’s Republican candidate for governor, Ed Gillespie, likes to say he’s started three small businesses, but he usually doesn’t name them. That’s not surprising, given what they are: a lobbying shop that became one of the 10 biggest in the country, a public relations firm connected to a different lobbying powerhouse, and a public relations firm that he says represents “corporate America.”

His lobbying clients haven’t always been the kinds of businesses you’d want to list on campaign literature either. After co-founding Quinn Gillespie & Associates in 2000, Gillespie relied on a collection of corporate giants to build a business that pulled in $18 million per year. When Washingtonian magazine ranked DC’s top lobbyists in 2007, Gillespie came in eighth—four spots behind his Democratic partner, Jack Quinn. Now Gillespie and his campaign team are using that lobbying experience to say he “knows first-hand the challenges business owners face.”

In October, the Washington Post reported that, despite making college affordability a campaign priority, Gillespie spent years lobbying for loan providers who were trying to do “the exact opposite.” His work for Tenet Healthcare, a Fortune 500 company that runs 77 hospitals, tells a similar story. Gillespie’s health care plan makes reducing medical costs a priority and calls for preventing “waste and abuse” by limiting doctors’ ability to refer patients to themselves. A decade before, Gillespie lobbied for Tenet as it battled allegations of far more serious abuse.

When QGA signed Tenet, the company had just paid an $820,000 settlement after it was accused of improperly billing Medicaid. Three years before, the Justice Department secured a $54 million settlement following allegations that doctors at one of its hospitals had performed unnecessary heart procedures. One lawyer told the New York Times that more than 100 of his clients had received unnecessary bypasses.

In 2006, the same year Gillespie started representing Tenet, the Justice Department said Tenet had inflated hospital charges and billed for services it had not provided. Lobbying disclosure forms show they were brought on to deal with one issue: “Medicare Payment Issues.” Three months later, Tenet settled with the Justice Department for more than $900 million without admitting guilt. That may have been a victory: The Associated Press reported that some analysts were expecting Tenet to pay as much as $1.5 billion.

In 2012, Tenet once again settled for overbilling Medicare, paying $42 million without admitting guilt. The Justice Department said the improper billing happened between May 2005 and December 2007, when Gillespie and his firm were paid at least $480,000 to lobby for Tenet. The Gillespie campaign did not respond to a request for comment.

Last year, Tenet paid a $513 million settlement for an alleged kickback and bribery scheme in which the owners of prenatal clinics were paid to refer undocumented Hispanic women to Tenet hospitals between at least 2000 and 2013. Some of the women were reportedly told they could deliver their children only at Tenet facilities. The Justice Department’s criminal charge stated that the deceptive information caused many pregnant mothers to travel long distances, putting their health at risk. As a result of the referrals, Tenet got more than $145 million from Medicaid and Medicare, according to the Justice Department.

Many of Gillespie’s other clients were less controversial. Some were household names like Delta Airlines and NBC. A few were niche players, like a trade group that defends farmers’ right to make foie gras, the force-fed duck liver delicacy. Sometimes, combinations of clients—such as tobacco giants followed by Friends of Cancer Research—suggested a degree of ideological flexibility. Similarly, Gillespie lobbied for the Coalition to Advance Healthcare Reform, a group of large employers fighting for universal health insurance. They hoped to achieve that through a market-based solution and an individual mandate—the key components of Obamacare. As a candidate for governor, Gillespie supports repealing the Affordable Care Act.

What united Gillespie’s clients was their willingness to pay for results. Inside the firm, lobbyists appeared to get a kick out of the mercenary approach. In his 2012 tell-all memoir The Payoff: Why Wall Street Always Wins, Gillespie’s former colleague Jeff Connaughton said they set their political views aside while they lobbied for QGA. He said they joked that their true allegiance was to the “Green Party.”