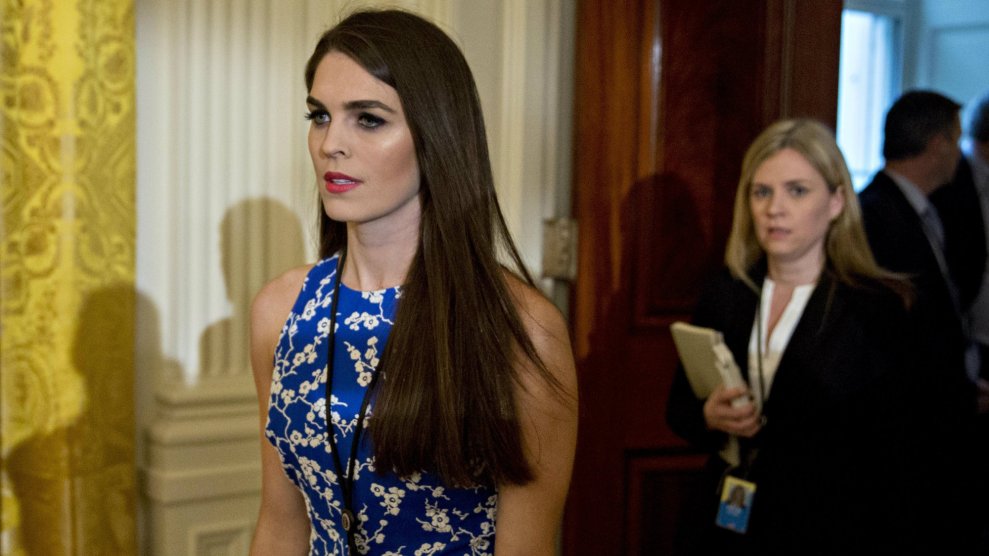 Hope Hicks’ time in the barrel may come soon. Special counsel Robert Mueller is reportedly aiming to interview the White House communications director as part of the Trump-Russia investigation. When he and his team of lawyers do so, they presumably will be mindful that the 29-year-old Hicks told one of the biggest whoppers of the 2016 campaign.

Two days after Donald Trump won the election, Russian Deputy Foreign Minister Sergei Ryabkov said the Russian government had been in contact with the Trump campaign. “There were contacts,” he remarked. “We are doing this and have been doing this during the election campaign.” He noted that the Kremlin knew many of Trump’s closest allies and was in touch with them. “Obviously, we know most of the people from his [Trump’s] entourage.” he said. “Those people have always been in the limelight in the United States and have occupied high-ranking positions.” Ryabkov added that these contacts would continue.

This comment contradicted Trump’s claim—which he declared repeatedly through the campaign—that he had nothing to do with Russia. That was often how he responded when asked about Russia’s cyberattacks against the Clinton campaign and other Democratic targets. Though the US intelligence community, a month before the election, released an assessment stating that Russia was trying to subvert the presidential contest, Trump and his lieutenants constantly claimed there was no evidence of Moscow involvement.

No communication. That was a wildly false statement. There were many communications—with Russians and foreign entities, including WikiLeaks, which dumped the Democratic emails stolen by Russian intelligence.

Trump’s top advisers—Donald Trump Jr., Jared Kushner, and Paul Manafort—met privately with a Russian emissary who they were told would provide them dirt on Hillary Clinton as part of a secret Russian government plan to help Trump. George Papadopoulos spent months in contact with Russians trying to arrange first a meeting between Trump and Putin and then a back-channel communication with Putin’s office. Carter Page, another campaign foreign policy adviser, traveled to Moscow in July 2016 to give a speech there and, while in the Russian capital, had contact with Russian Deputy Prime Minister Arkady Dvorkovich and Andrey Baranov, the head of investor relations at Rosneft, a state-owned oil company.

And there’s more. Then-Sen. Jeff Sessions, a top Trump campaign adviser, Kushner, Page, and J.D. Gordon, a foreign policy aide for the campaign, each met with Russian Ambassador Sergei Kislyak during the presidential race. And earlier this year, Kislyak told the Washington Post that he had conversations with retired Gen. Michael Flynn, Trump’s top national security adviser during the campaign, prior to Election Day. (Kislyak declined to say what the two discussed.) In July 2016, while Manafort was campaign manager, he offered to provide “private briefings” on the presidential race to Russian oligarch Oleg Deripaska, a tycoon close to Putin. And in the fall of 2016, Trump Jr. exchanged private messages with WikiLeaks.

So Hicks was putting out false information—but it was a line consistent with the campaign’s stonewall. Its top officials had been informed that the Kremlin was trying to covertly assist Trump, yet Trump and his aides constantly denied Putin was meddling in the election. And some of the contacts between Trump campaigners and Russians—particularly those of Papadopoulos and Page—were known by senior campaign officials. Yet the campaign revealed none of these interactions during the election, when Russia’s involvement was a major controversy.

Is it possible Hicks was unaware of all this activity? She did know about Page’s trip to Moscow; she commented on it publicly. And she was directly informed that Trump Jr. had been in contact with WikiLeaks. According to The Atlantic, after Trump Jr. received the first message from WikiLeaks, he emailed other senior campaign aides, including Kushner, Steve Bannon, Kellyanne Conway, and Brad Parscale to tell them WikiLeaks had reached out to him. Kushner forwarded this email to Hicks.

Hicks has been by Trump’s side since 2014, when she went to work for the Trump Organization. (Prior to that she was at a New York public relations firm contracted by Ivanka Trump.) She was with Trump when he decided to fire FBI chief James Comey. She was on Air Force One when Trump reportedly got involved in drafting a misleading White House statement regarding the meeting between Trump Jr., Kushner, Manafort and the Russian emissary. Mueller and his crew have much to talk about with Hicks. But she is not just any witness. She is part of the cover-up.