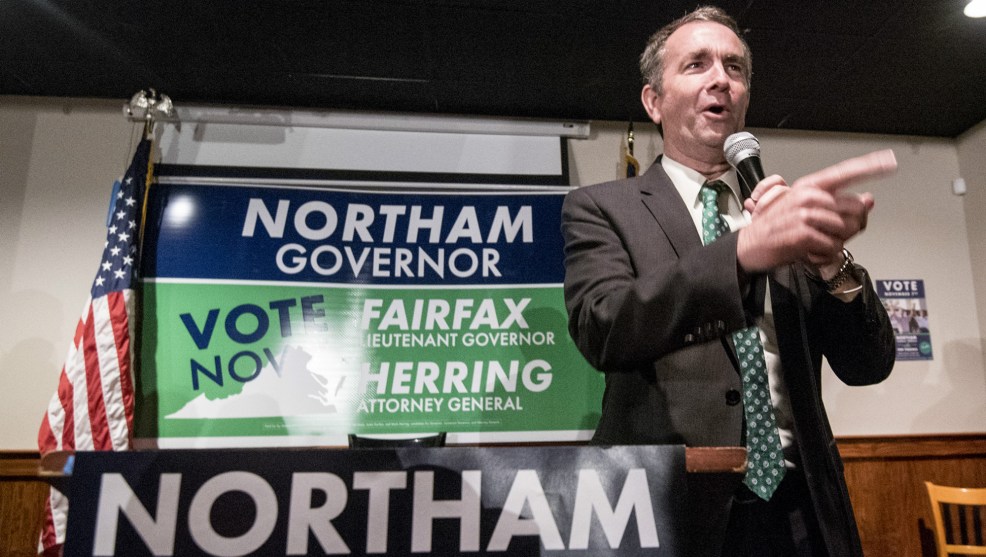 That was the title of a two-page memo that circulated among a dozen Republican donors and activists in Virginia. It was late June. Ed Gillespie, the former Republican National Committee chairman and veteran lobbyist, had just squeaked out a victory in the GOP primary for governor over a Confederacy-loving county official he was expected to trounce.

The memo—shared with Mother Jones—laid out why Gillespie stood little chance of beating the Democratic nominee, Lt. Governor Ralph Northam. It described four key voting blocs in Virginia: northern Virginia suburbanites, voters in rural and semi-rural counties, heavily concentrated pockets of black voters around the state, and swing voters in counties such as Henrico, Loudoun, and Hanover. Republicans typically struggle in the suburbs and with black voters. To win statewide, the memo concluded, a GOP candidate needed to run up a net margin of at least 210,000 votes in 82 reliably Republican areas.

Trump won those 82 areas last year by 416,863 votes, the memo said. But Gillespie had lost all but a small number of them in this year’s Republican primary. And he hadn’t fared much better in his 2014 run for US Senate, racking up a paltry 182,000-vote margin in these places. Unless he drastically changed course, the memo said, Gillespie was toast in the governor’s race.

Fast-forward to today. The election is seven days away. The Virginia governor’s race has tightened to within several points. Northam, a pediatric neurologist and Army veteran, is the favorite, in a political climate favorable to Democrats, but Gillespie remains within striking distance. And as the race enters its final week, Democrats and Republicans alike are questioning what they see as a costly—and inexplicable—decision by Northam’s campaign: refusing to make the race more about Trump.

“It should’ve been all about Trump for Democrats up to this point,” says Mark Rozell, the dean of the Schar School of Policy and Government at George Mason University. Rozell says Trump’s mid-30s approval rating in Virginia, Hillary Clinton’s 5-point win there last year, and the state’s long history of electing a governor from the party not in control of the White House all accrue to Democrats’ benefit. “They have not taken advantage of the key fundamentals in their favor,” he says. “Those fundamentals all lean Democrat, but the race at this stage is very close.”

Just as Republicans relentlessly used President Barack Obama’s unpopularity to their advantage in the 2010 midterm elections, netting 63 seats in the House of Representatives, Democratic and Republican operatives say Northam had the opportunity to make his race all about Trump. These operatives in both parties argue that a sustained ad campaign painting Gillespie and Trump with the same brush could’ve sunk an already weakened Gillespie. But that’s not what has happened. “Northam is the one who let Ed up off the mat,” says a conservative Virginia operative.

Both Northam and Gillespie emerged from their respective primary elections in rough shape. Northam faced an unexpected and feisty challenger in Tom Perriello, the former congressman and State Department appointee. Northam fended off Perriello’s insurgent bid, but not before spending more than $7.5 million—funds that could have gone toward the general election.

Gillespie began the general election with more money on hand but arguably worse off. He’d beaten Corey Stewart, a hotheaded Trump acolyte with far less money and organization, by 1.2 percentage points. The narrative coming out of the primary was how mightily Gillespie’s campaign had struggled against a fringe candidate—“Nothing is worse than a Yankee telling a Southerner that his monuments don’t matter,” Stewart tweeted in April—and with GOP base voters, all those Trump supporters in the southern and western parts of Virginia.

To make matters worse for Gillespie, the Virginia electorate appears to favor Northam. According to one Virginia Democratic consultant, internal polling by the Northam campaign has contained anywhere from a 3-point to a 6-point Democratic lean in a generic statewide election. In the 2013 governor’s race, the consultant says, then-Democratic nominee Terry McAuliffe’s internal polling came up with a 3-point lean—for Republicans.

And then there was the question looming over Gillespie: What to do about Trump?

Embrace the president and his abysmal standing in Virginia—and your defeat is a whole lot more likely. Ignore Trump—and you risk alienating those GOP voters in rural and semi-rural areas. What you’re left with is the tightrope that Gillespie has carefully walked: He won’t appear with Trump while he and his campaign pander to Trump voters with the type of anti-immigrant scaremongering that came out of the Trump campaign in 2016.

What mystifies activists and consultants in both political parties is why Northam has refused to attack Gillespie for his have-it-both-ways approach to Trump.

During the Democratic primary, Northam referred to Trump as “a narcissistic maniac.” But Northam has since dialed back the pitch and tone of those attacks. In early October, his campaign unveiled a major TV ad blitz—a 30-second spot that bashed Trump for his proposed cuts to education funding, environmental protection, and health care. The ad criticized Gillespie as someone who “refuses to stand up” to Trump. Yet it also contained a line that mystified—if not infuriated—some Virginia Democrats: “If Donald Trump is helping Virginia, I’ll work with him.”

The Northam campaign has gone on to air multiple ads that mention Trump and Gillespie on policy issues. Northam will refer to Gillespie as “Trump’s top lobbyist.” But operatives in both parties say these messages are glancing and secondary, falling short of the full-throated barrage needed to link Gillespie to Trump or call out Gillespie’s high-wire act with respect to the president. “They have chosen a ‘let’s not shake the apple cart’ route,” says the Democratic consultant. “It’s a more traditional, pre-McAuliffe kind of Virginia approach.”

David Turner, a spokesman for Northam, says the campaign has sought to strike a balance between bringing Trump into the campaign without having the president distract from the Northam campaign’s own message. “When you’re using Trump in a campaign, you really need to use a scalpel rather than a machete,” he says. “Any time Trump gets involved, it becomes a giant sucking black hole for anything else.”

Turner added that the Northam campaign believed voters responded best when the campaign connected Gillespie to Trump on specific policies—environmental protection, education—not just in purely personal or political terms. “I think the average voter wants to know, ‘What does this have to do with me?’” Turner says. “Just saying Trump, Gillespie, X—that doesn’t do it.”

Even critics of Northam’s campaign think that, despite his missed opportunity to anchor Gillespie to Trump, he will likely pull off a victory. They point to the favorable conditions this year in Virginia and to the state Democratic Party’s get-out-the-vote efforts. That vaunted operation helped turn out white and black voters in droves for McAuliffe four years ago, and it is working around the clock for Northam and the rest of the Democratic ticket.

When the story of this year’s Virginia governor’s race is written, the caution of the Northam campaign will figure prominently. But will it have cost Northam the governorship itself?