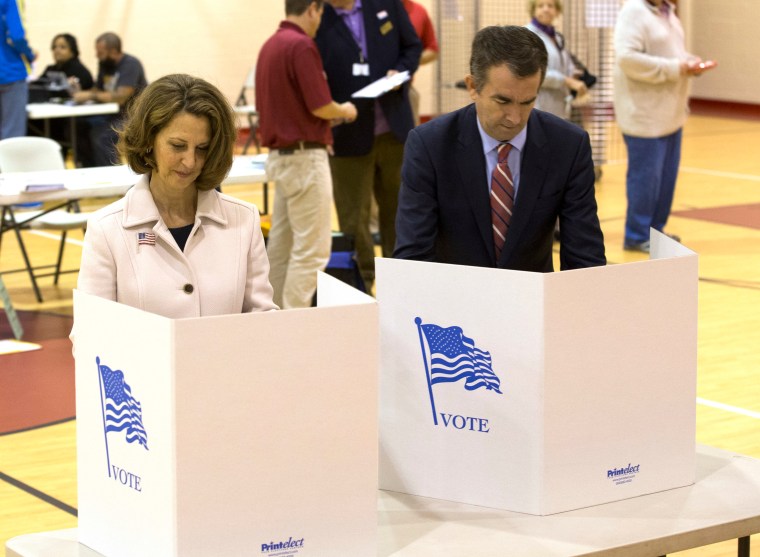 Ralph Northam and his wife, Pam, vote in Norfolk, Virginia, on Tuesday.Steve Helber/AP

Brianna Ross of Richmond, Virginia, lost her right to vote at 19 when she received a felony conviction for stealing diapers for her newborn son. Now 53, she voted for the first time in her life in Virginia’s statewide elections yesterday.

“I remember way back in 1993, when the judge told me, ‘You can’t ever vote,’” she told Sam Levine of the Huffington Post. “I didn’t know what that meant, but it made me feel empty, it made me feel unimportant. But I voted today.”

Brianna Ross lost her right to vote when she was 19 because she stole diapers for her son. Today she voted for the first time in her life. pic.twitter.com/xyAb9fiFW8

Virginia was one of four states that blocked ex-felons from voting—disenfranchising 1 in 5 black Virginians—until Gov. Terry McAuliffe restored voting rights to 168,000 ex-felons over the past year and a half. Ross was among them.

Republican gubernatorial candidate Ed Gillespie sharply criticized McAuliffe and his lieutenant governor, Ralph Northam, for this policy. But Northam’s victory in the governor’s race on Tuesday means that Virginia will continue to restore voting rights to ex-offenders. It’s just one way that Democratic victories in Virginia, New Jersey, and Washington yesterday could lead to an expansion of access to the ballot.

Northam’s win also means Virginia Democrats will have veto power over the state’s next redistricting process, which will take place after the 2020 Census, for the first time since 1991. That could lead to fairer maps that make the state more politically representative. Last night, Democratic candidates for the state House of Delegates received nine percentage points more of the vote than Republicans, but the body ended up with a 50-50 split, in large part because of Republican gerrymandering efforts. If Democrats take back the legislature following state senate and House elections in 2019, Virginia Democrats could also repeal the state’s voter ID law, which requires a driver’s license or government-issued photo ID to cast a ballot. Northam has called the law “unnecessary and restrictive.”

Elsewhere, New Jersey and Washington state could become the 11th and 12th states to enact automatic voter registration. Last year, New Jersey’s Republican governor, Chris Christie, vetoed a bill that would have automatically registered eligible voters when they obtain or renew a driver’s license or state photo ID at the DMV. Voting rights advocates said it could sign up 1.6 million unregistered voters in the state. Democrat Phil Murphy, who won Tuesday’s gubernatorial election, has pledged to sign the law and supports other policies to improve ballot access, including Election Day registration and an expansion of early voting. “Make it easier for people to register, and give them more opportunities to cast their vote,” Murphy’s platform said.

After Democrats gained control of the Washington legislature on Tuesday, that state is poised to pass a similar automatic registration law. Washington’s neighbor, Oregon, became the first state to adopt an automatic registration law in 2016, and the results were impressive: Oregon had the largest turnout increase in the country in the last presidential election, and the percentage of people of color registered jumped from 53 to 79. Ten states have now passed or implemented similar efforts.

Before Tuesday, 2017 had been a rough year for voting rights. More states had passed new restrictions on voting in 2017 than in 2016 and 2015 combined. But Democratic victories yesterday in three key states could begin to reverse that trend.