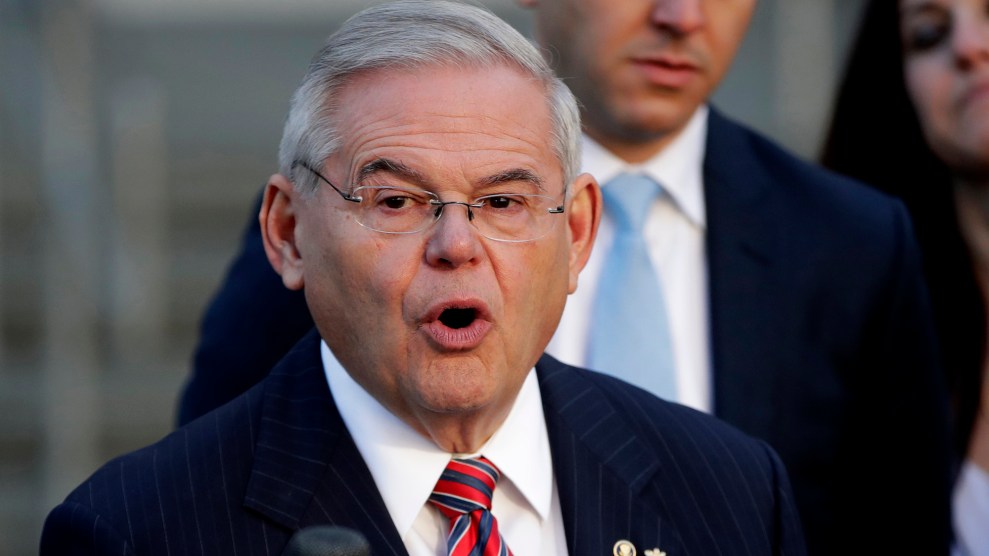 Following the mistrial in his bribery case, Sen. Robert Menendez (D-N.J.) wants his job back as the top Democrat on the Senate Foreign Relations Committee. He stepped down from this position when he was indicted in 2015. Menendez is now angling to regain this prestigious and influential position—a bid backed by top Senate Democrats. But this move could get in the way of Democrats’ efforts to highlight various ethics problems of the Trump administration.

Asked if he hoped to return to the top Democrat spot on the committee position—which he had held for two years—Menendez answered emphatically, “I expect to.” Menendez says he is ready to assume the role immediately, if federal prosecutors decline to try him again. A new trial seems less likely after reports that jurors in the case leaned 10-2 against conviction. “The senator looks forward to returning to his position with the Foreign Relations Committee once this issue is behind him,” Tricia Enright, a Menendez spokeswoman, says. That would entail shoving aside Sen. Ben Cardin (D-Md.), who took over the job in 2015. Such a move would place Menendez in line to become chairman of the committee, if Democrats regain control of the Senate.

US District Court Judge William Walls declared a mistrial in Menendez’s case on November 16, more than two and a half years after federal prosecutors in New Jersey indicted Menendez on charges of bribery, corruption, and making false statements. Menendez was accused of performing political favors for a wealthy Florida eye surgeon, Salomon Melgen, in exchange for luxury vacations, airline tickets, golf outings, and campaign donations. Shortly after his indictment, Menendez said he was “temporarily stepping down” as the ranking member of the Foreign Relations Committee. He noted that he had an understanding with then-Senate Majority Leader Harry Reid (D-Nev.) that he would return to the post “upon the successful resolution of the allegations before me.”

Menendez’s office told Mother Jones that Senate Minority Leader Chuck Schumer (D-N.Y.) has agreed that he can return to the foreign relations post if the Justice Department declines to try the Menendez again. Menendez recently made his case in a phone call with Schumer, a source said. Schumer “is supportive,” Enright said. She said Schumer agreed last January to Menendez returning to the job if the senator was not convicted. Though the Democratic caucus has to approve the move, Schumer’s backing will likely ensure that Menendez can reclaim the position, several senators say. Schumer spokesman Matt House declined to comment.

The ethics panel began investigating allegations against Menendez in 2012 but suspended its probe the following year in deference to the Justice Department investigation, a standard step in such circumstances. Ethics Committee members announced after Menendez’s mistrial that they would resume the probe.

Democratic Senate aides, though, worry that Menendez’s  return to the ranking-member slot could complicate the party’s efforts to focus on President Donald Trump’s scandals in the 2018 midterm elections, when Menendez will be up for reelection. Rep. John Conyers (D-Mich.), long the top Democrat on the House Judiciary Committee, recently stepped down as the panel’s ranking member following sexual harassment allegations. On Thursday, House Minority Leader Nancy Pelosi (D-Calif.) said Conyers should resign from Congress. Sen. Al Franken (D-Minn.), facing an Ethics Committee investigation into allegations that he groped multiple women, has apologized but rejected calls for his resignation. He has not given up his position as ranking member of a Senate Judiciary subcommittee.

Sen. Claire McCaskill (D-Mo.) said Menendez should not return to the foreign relations job before the Ethics Committee investigation is done.

“We need to be careful, because if we want anybody to have any confidence in the ethics process, we need to respect it,” said McCaskill, who is up for reelection next year. “The Ethics Committee needs to take a look at it and make a decision, and I think the Senate should act once that’s clear.”

Sens. Jon Tester (D-Mont.) and Bill Nelson (D-Fla.), who are also up for reelection in 2018, say Menendez should be able to immediately return to his job. “Shit,” Tester said when asked if Menendez should get his old post back. “I never thought of that. But yeah, he should.”

Prosecutors “failed to prove their case,” says Sen. Dick Durbin (D-Ill.), the second-ranking Senate Democrat. “That decides it, as far as I’m concerned. And if they don’t go forward with any additional prosecution, I believe he should be given full status in the Senate.”

But critics say the bar for avoiding jail time is not the same as the bar for holding a top position on an influential Senate panel. “We have higher standards for members of Congress to meet than just avoiding criminal convictions,” said Melanie Sloan, a senior adviser to American Oversight, a government watchdog group. Sloan formerly led Citizens for Responsibility and Ethics in Washington, which played a role in the Menendez case in 2012, when it shared a dossier of allegations regarding the senator’s relationship to Melgen with the FBI. Sloan has also asserted Conyers mistreated her and other staff members when she worked for the House Judiciary Committee in the 1990s.

The Ethics Committee could censure Menendez for actions that, while not necessarily criminal, fall into the broad category of “conduct unbecoming a United States senator.”

Menendez did not deny accepting gifts from Melgen or doing favors for him. Rather, Menendez’s lawyers argued that those gifts and favors were legal because the men were friends. Menendez acknowledged that he failed to list Melgen’s gifts on his annual Senate financial disclosure forms, calling the omissions an oversight. He reimbursed Melgen for about $58,000 worth of airline tickets, after news of the federal investigation into his relationship with Melgen. Menendez also did not dispute that he intervened with the Department of Health and Human Services to help Melgen resolve federal allegations that he overbilled Medicare for $8.9 million. Melgen was later convicted of Medicare fraud. Prosecutors in that case want a federal district court judge in Florida to impose a 30-year sentence on Melgen at a sentencing hearing Tuesday.

Menendez’s favors for Melgen included acts that capitalized on his position on the Foreign Relations Committee. In meetings and calls to senior State Department officials, Menendez pressed agency officials to help resolve a contractual dispute between a Melgen-owned firm and the Dominican Republic in Melgen’s favor. Menendez also helped three foreign women in their 20s who had romantic relationships with the married Melgen, now 63, obtain US visas, prosecutors said.

The Ethics Committee “should not have trouble figuring out some of those things are unethical,” said Sloan. “When you’re a senator, you shouldn’t use your position to procure government favors for a friend.”

Sen. Dianne Feinstein (D-Calif.) faulted the Justice Department for prosecuting Menendez without strong evidence of a quid pro quo and said she supported his bid to get his foreign relations post back. “I am very pleased he was exonerated,” Feinstein said. “He can be a valuable member of the party, and he should have that opportunity.”

But when asked if his mistrial represented exoneration, Feinstein responded, “You’re right. Change that.”