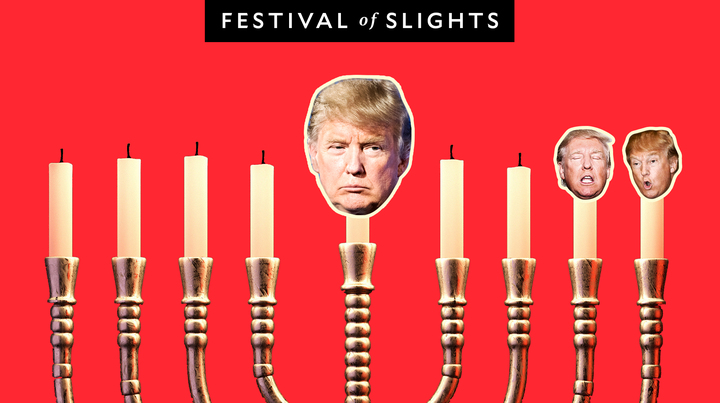 During presidential elections, there is sometimes a lull of inactivity after both parties settle on their general election nominees before the conventions. But this was not the case in the contest that pitted Donald Trump against Hillary Clinton.

The Republican nominee had spent much of the year retweeting Twitter users like @WhiteGenocideTM. So it wasn’t wholly surprising when, on the second day of the seventh month, Trump made history with what the Clinton campaign would call a “blatantly anti-Semitic” tweet.

Immediately, critics and people with eyes noticed the massive, red Star of David labeled “Most Corrupt Candidate Ever!” over the cash money background.  The tweet was roundly denounced as a not-very-quiet dogwhistle to Trump’s alt-right fans. Trump seemed to be saying, “Crooked Hillary has accepted money from thieving Jews.” And it was heard loud and clear. Former Klu Klux Klan leader David Duke praised the tweet as being “all true.”

Despite this, Trump soon caved, deleting the tweet and replacing it with this.

This new, less Jew-y, image seemed to say, “Crooked Hillary takes money from anyone.” But sadly for Trump, those nagging reporters kept asking about the earlier version, the one with the symbol the Nazis used to pin on Jews to identify them.

Trump’s response was that the tweet had nothing to do with Jews! And that in fact it wasn’t a Star of David at all. It was actually a “sheriff’s star”—or, confusingly, a “plain star.”

Dishonest media is trying their absolute best to depict a star in a tweet as the Star of David rather than a Sheriff's Star, or plain star!

This was, up to that point, the single stupidest thing anyone had ever said in all of history. (It has since been surpassed by, well, something we’ll get to in a future installment.) Even David Duke wasn’t buying the excuse. “No way, folks. Clinton, money, the most campaign corrupt person,” Duke said.

Trump’s son-in-law, Jared Kushner, is the owner of the New York Observer. He is also an Orthodox Jew. This incident was so outrageous to people still alive enough to feel outrage that one of the paper’s reporters, Dana Schwartz, took to the pages of Kushner’s own publication to call him out for standing silently by while his wife’s father played footsie with Nazis.

You went to Harvard, and hold two graduate degrees. Please do not condescend to me and pretend you don’t understand the imagery of a six-sided star when juxtaposed with money and accusations of financial dishonesty. I’m asking you, not as a “gotcha” journalist or as a liberal but as a human being: how do you allow this? Because, Mr. Kushner, you are allowing this. Your father-in-law’s repeated accidental winks to the white supremacist community is perhaps a savvy political strategy if the neo-Nazis are considered a sizable voting block—I confess, I haven’t done my research on that front. But when you stand silent and smiling in the background, his Jewish son-in-law, you’re giving his most hateful supporters tacit approval.

The worst people in this country saw your father-in-law’s message and took it as they saw fit. And yet Donald Trump in his response chose not to condemn them, the anti-Semites who, by his argument were obviously misinterpreting the image, but the media.

And now, Mr. Kushner, I ask you: What are you going to do about this? Look at those tweets I got again, the ones calling me out for my Jewish last name, insulting my nose, evoking the holocaust, and tell me I’m being too sensitive. Read about the origins of that image and see the type of people it attracted like a flies to human waste and tell me this whole story is just the work of the “dishonest media.” Look at that image and tell me, honestly, that you just saw a “Sheriff’s Star.” I didn’t see a sheriff star, Mr. Kushner, and I’m a smart person. After all, I work for your paper.

The next day, Kushner responded to Schwartz with an open letter of his own, in which he declared, “My father-in-law is not an anti-Semite. It’s that simple, really. Donald Trump is not anti-Semitic and he’s not a racist.”

Thirteen months later, a white nationalist mob descended on Charlottesville, Virginia, to protest the planned removal of a statue of Confederate Gen. Robert E. Lee. They chanted, “Jews will not replace us,” “White lives matter,” and the Nazi slogan “Blood and soil.” One counter-protester was killed and 19 injured when they were run down by a driver who reportedly held Nazi sympathies. The driver was charged with murder.

“I think there’s blame on both sides,” Trump declared following the violence in Charlottesville. “You had some very bad people in that group. But you also had people that were very fine people, on both sides.”