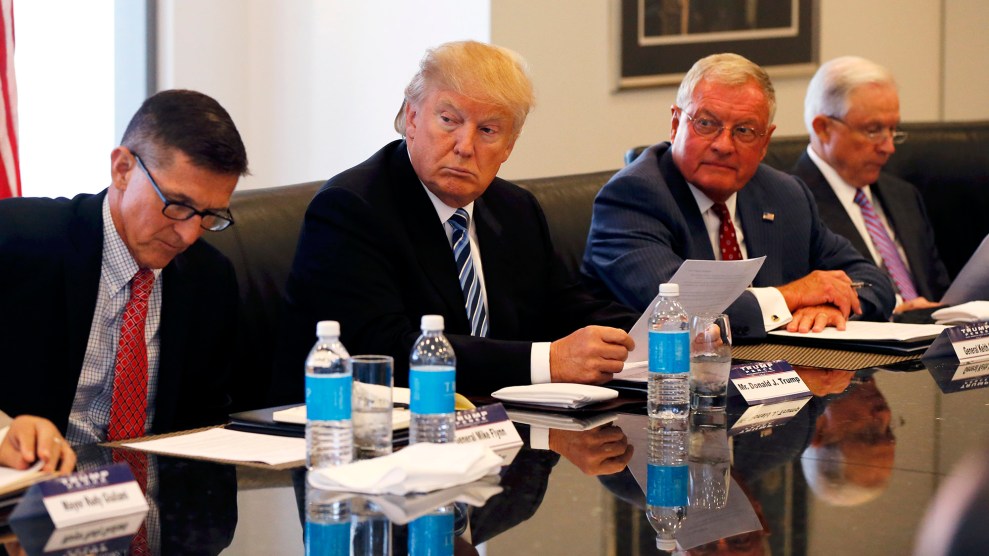 On Wednesday afternoon, Rep. Elijah Cummings (D-Md.) released a letter noting that his staff has spoken with a “whistleblower” who says that on the day Donald Trump was inaugurated as president, Michael Flynn, who was about to become national security adviser, was texting with a former business associate named Alex Copson to tell him that their plan to work with Russia to build nuclear reactors throughout the Middle East was “good to go.” According to the whistleblower, Copson said that day that Flynn would make sure that US sanctions imposed on Russia would  be “ripped up” and that doing so would clear the way for the ambitious nuclear project. Cummings’ letter suggests that Flynn, who had previously worked as a private consultant for Copson’s company, was still in cahoots with Copson and intended to use the White House position he was about to assume to facilitate this controversial deal. Months earlier, Copson was also hoping to enlist Jeff Sessions, who at the time was a US senator from Alabama, to help advance the deal.

Copson and his company, ACU Strategic Partners, had a grand vision: to form a joint project with Russia to develop more than three dozen nuclear power plants throughout the Arab world. Copson claimed this scheme would stabilize the region. One of the first steps in that plan was buying an unfinished nuclear power plant in north Alabama.

“Alabama senators can help the next [presidential] administration move this project forward.”

Last year, the Tennessee Valley Authority put up for auction the Bellefonte Nuclear Plant, located in Hollywood, Alabama. The minimum asking price was $36.4 million. And Copson’s company came knocking. It submitted a proposal to obtain the facility, spend $20 billion to fix it up, and then export $300 billion worth of nuclear material to Middle East nuclear plants over 40 years. But ACU Strategic Partners was not offering to buy the plant. Instead, it proposed that the TVA transfer Bellefonte to it in return for “an equity position in the super consortium” pulling together the Middle East deal with Russia.

Under this plan, once the two reactors at Bellefonte were completed, the plant would be a training center for the Middle East project. “Completion of Bellefonte 1 & 2 is very important to the US/Russian collaboration to stabilize the Middle East through nuclear power,” Copson said in 2016. “It’s a very good training vehicle to complete those reactors.”

Copson told Al.com at the time that he was looking to Alabama’s Republican senators—Sessions and Richard Shelby—to assist with this project. “Alabama senators can help the next [presidential] administration move this project forward,” he said. By this point, Sessions was also a top campaign adviser to Donald Trump.

ACU Strategic Partners was part of an international consortium that, according to the Wall Street Journal, included companies that were seeking “to build as many of 40 nuclear reactors in countries including Saudi Arabia, Jordan and Egypt” and “to partner with either the Russian or Chinese governments, which would be responsible for taking the spent fuel from the reactors and disposing of it.”

Obama administration officials took a skeptical view of the project. And Copson hired Flynn in 2015 to promote the plan. Flynn later reported on a financial disclosure form that he served as an “advisor” to ACU Strategic Partners from April 2015 to June 2016. In June 2015, he flew to the Middle East to talk up the project and was paid $25,000 by Copson’s company.

There is no public indication that Copson succeeded in enlisting Sessions’ help for the deal. Sessions is now the attorney general. Asked whether Sessions had ever been contacted by Copson or ACU Strategic Partners regarding this nuclear deal, the Justice Department declined to comment.

In late 2016, the Bellefonte nuclear facility was sold for $111 million, but Copson’s company didn’t end up making a final offer. Still, ACU Strategic Partners pushed ahead with its overall plan to construct nuclear power facilities in the Middle East with Russia.

Cummings letter indicates that even when Flynn was about to enter a government position—and was no longer officially working for Copson—he remained keen on making this deal happen. The Washington Post recently reported that “Flynn continued to support the idea of the nuclear project during the presidential transition. He encouraged Tom Barrack, one of Trump’s closest friends, to pursue a related plan.”

The whistleblower cited by Cummings maintains that on Inauguration Day, Copson told him, “Mike [Flynn] has been putting everything in place for us. I am going to celebrate today…This is going to make a lot of very wealthy people.” Copson, the whistleblower recalled, also complained that Obama had “fucked everything up in my nuclear deal with the [Russian] sanctions.” Copson, in the whistleblower’s account, explained that the the United States would have to provide military support to “defend these installations” and that doing so would provide the US government a pretext for placing US troops in these countries.

According to the Cummings letter, Copson was working hard to influence the US government so this Russia-related project could proceed. Flynn’s role in all this obviously warrants investigation by special counsel Robert Mueller and congressional committees. But any probe of this matter should cast a wider net to determine whom else Copson recruited to influence the US government and grease the way for his scheme to work with Russia to nuclearize the Middle East.