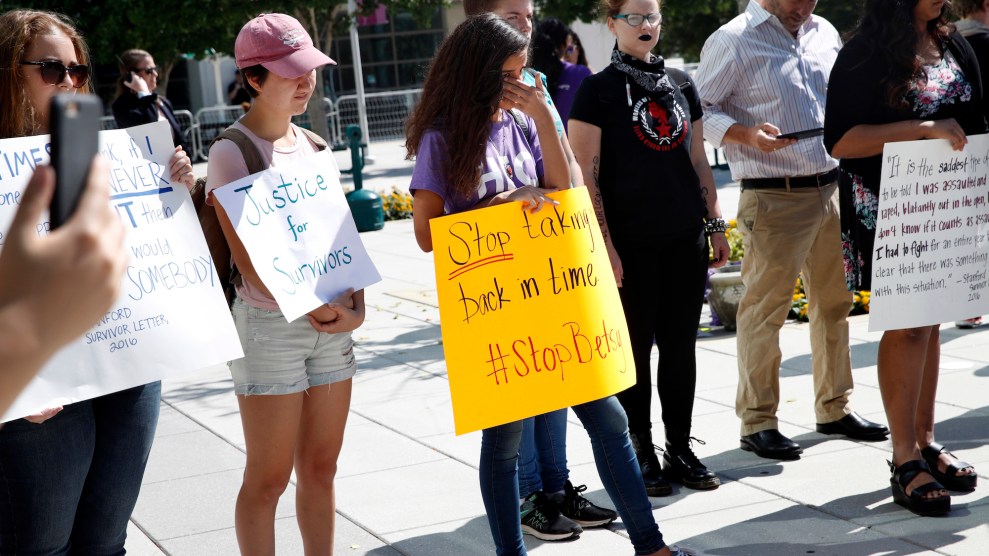 Protesters gather at George Mason University in Virginia in September, in advance of a speech by Education Secretary Betsy DeVos, to object to proposed changes to Title IX sexual assault guidelines.Jacquelyn Martin/AP

A landmark Republican higher education bill would not only rescind programs that help make college affordable—it also seeks to reform campus culture in ways that could restrict schools’ ability to govern campus speech and address allegations of sexual assault.

The most striking provisions take aim at Title IX, the law that protects students from gender-based discrimination and governs how schools handle sexual violence investigations. Under the bill, school counselors would not have to report sexual assault incidents to campus administrators, and law enforcement officials would be permitted to postpone campus disciplinary proceedings as they conduct their own criminal investigations. Those changes could lead to underreporting of sexual violence and delays in bringing school-based remedies to victims.

The proposals are part of the Promoting Real Opportunity, Success, and Prosperity Through Education Reform (PROSPER) Act, the Republican effort to reauthorize the Higher Education Act of 1965. The HEA directs the federal government’s role in higher education, primarily through financial aid but also on topics like drug and alcohol abuse, campus speech, and discrimination. Last week, a House committee voted to send the PROSPER Act to the House floor, setting it up for a likely vote early next year. Democrats on the committee have received 47 letters from education advocacy organizations opposing the bill for shrinking student aid and regulating campus culture and student rights.

The PROSPER Act tackles campus sexual assault with a vision that takes its cue from Education Secretary Betsy DeVos. In September, she overturned Obama administration guidance on the subject, citing concerns over due process for the accused, and the bill seeks to enshrine some of her Education Department’s new recommendations into law. It exempts sexual assault counselors from both the Clery Act, which requires schools to publish their campus crime statistics, and the Title IX reporting requirement, which asks certain classes of employees to report and record instances of campus sexual assault. As a result of these recommendations, the bill could lead to significant underreporting of sexual assault statistics.

The legislation also holds that law enforcement investigations into sexual assault allegations take precedence over schools’ judicial proceedings, a move that could delay school-based remedies for victims if law enforcement asks schools to hold off. Under current law, schools and law enforcement investigate and take punitive action independently, sometimes giving victims a swifter means of recourse from their schools even as lengthy criminal investigations are underway. Advocates for sexual assault victims say this change could keep the accused and accuser together on campus as each investigation runs its course, which can prove devastating to victims, and that it might discourage students from reporting crimes to the police if they believe doing so will interfere with institutional action.

Proponents counter that these measures will expedite legal action against criminals. “This is a smart policy because it gets people put in prison,” says Joe Cohn, legislative director of the Foundation for Individual Rights in Education, which has aligned with Republicans in advocating for free speech by controversial guests on progressive campuses. He adds that schools can provide interim suspensions, separate course schedules, and housing reassignments to alleviate student concerns.

The changes could lead to underreporting of sexual violence and delays in bringing school-based remedies to victims.

The GOP bill also contains a provision condemning “free speech zones” and schools policies that limit student speech for the sake of campus climate and student safety. The move follows laws in states like Colorado, Tennessee, and Virginia that abolish schools’ efforts to confine protests to certain areas of campus and limit which guests students can invite to speak. This isn’t the first time Congress has offered its take on student speech—the 2008 version of the HEA has a non-binding recommendation that colleges should protect a student’s right to free speech. But after violent protests on the campuses of schools like the University of California, Berkeley, and Middlebury College in response to conservative campus speakers reignited the campus speech debate, the GOP bill puts a sharper edge on that recommendation. Like its predecessor, however, it is non-binding, serving more as a nod to GOP ideology than a mandate for schools to act.

The PROSPER Act would also prohibit schools from requiring single-sex student groups, like fraternities and sororities, to admit members of other genders. The move seems to take aim directly at Harvard, which last year cracked down on single-sex club membership in an attempt to curb binge-drinking and sexual assault. But Cohn defends the provision as a way for private groups to maintain their identity. “To us,” he says, “it’s really a contest of diversity of organizations versus diversity within organizations.”

Terry Hartle, senior vice president at the American Council on Education, which represents roughly 1,800 colleges administrators and education executives, says the HEA reauthorization process has become a vehicle for lawmakers’ pet topics that go beyond its central purpose. “It’s not unlike a ship in a dock that attracts barnacles,” he says. “You’ll see legislation dealing with issues that are not central to it.”

Some of these provisions might not survive debate in the Senate. That body’s narrower Republican majority will need some cooperation from Democrats. (No Democratic members of the House Committee on Education and the Workforce supported the bill, claiming they were largely excluded from the lawmaking process.) Hartle also thinks legislators will hesitate to make laws that could have unintended consequences, especially on complex regulations like Title IX. “If you talk to the staff in both houses and both sides of the aisle, there’s a real reluctance to open up the Title IX closet, because there’s no telling what sorts of proposals will come forward or attract support,” he says. He instead thinks responsibilities for Title IX regulations will stay with the Education Department, which he expects will issue a draft of new recommendations early next year.

The Senate is likely to begin writing its version of HEA reauthorization legislation in the new year.