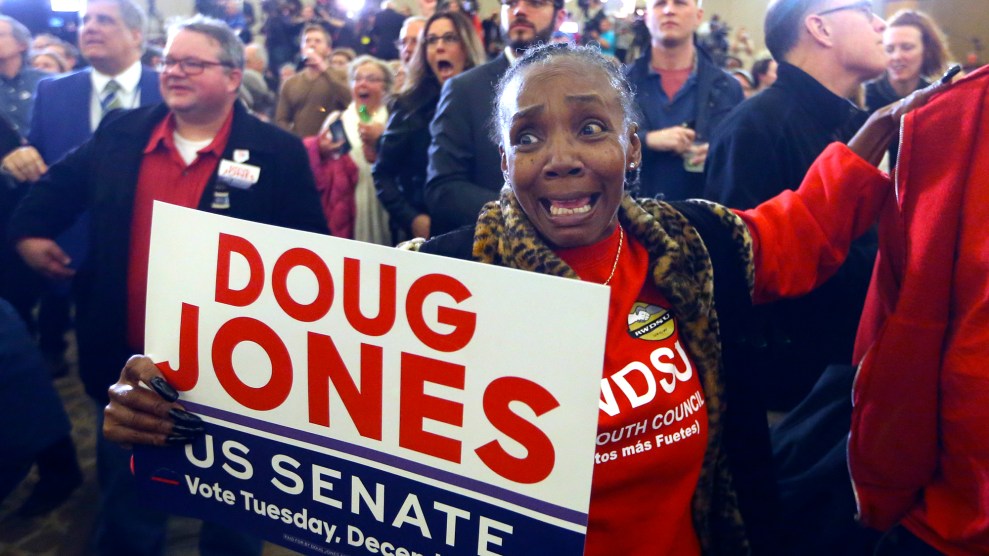 A supporter of Democrat Doug Jones reacts during an election-night watch party on Tuesday.John Bazemore/AP

Democrat Doug Jones’ victory in Alabama Tuesday wouldn’t have happened if not for a confluence of factors: sexual assault allegations against his opponent, Roy Moore; Moore’s lackluster campaigning; an energized national Democratic Party; strong fundraising by Jones. But none of those things would have made a difference if African Americans had not turned out in large numbers to support him.

In the final weeks of the campaign, Democratic strategists and activists worried that black voters would not vote in high enough numbers to help Jones win. The “25 percent” figure was thrown around a lot—the idea that African Americans needed to make up at least 25 percent of the electorate, with white voters, including some crossover conservatives, supplying the rest of the vote for Jones. If black voters made up 28 percent, as they had when President Barack Obama was on the ticket, then Jones would be in even better shape. But when the exit polls came in Tuesday night, they reported an electorate that was 30 percent African American, a number consultants had not even considered a possibility. As the precinct results began to roll in from Alabama’s urban centers and rural majority-black counties, it began to look like black voters would indeed carry the day for Jones.

The county-level results are indeed consistent with the notion that black voters represented a notably larger share of the electorate than they did in 2008 or 2012, as exit polls show

In the end, African Americans made up a larger percentage of the vote than their share of Alabama’s population—about 26 percent—even though they tend to be more affected than white Alabamians by the state’s voting restrictions, particularly permanent felon disenfranchisement and voter ID requirements. Few thought this kind of turnout was possible in the weeks before the election, when the prevailing notion was that black voters were not energized and that the Jones campaign was not paying enough attention to them. A combination of Democratic energy, new resources from African American groups, and a last-minute turnaround by the Jones campaign appear to have made the difference.

Jones’ campaign spent months doing outreach to white conservative voters, largely suburban women, in an effort to convince them to abandon the Republican Party. Ad after ad focused on wooing these voters, portraying Moore as unsupportable. This was at the expense of ads that would have appealed to black voters by focusing on issues like education, health care, and criminal justice that feel urgent to many African Americans.

But in the final weeks, the Jones campaign began to turn to exactly these kinds of appeals. Ads about health care ran on black radio stations. In the last week of the race, Jones barnstormed the state, paying special attention to African American communities in Birmingham, Selma, and rural areas. He brought with him prominent black politicians, including Sen. Cory Booker (D-N.J.) and Rep. John Lewis (D-Ga.). Meanwhile, Moore did little to gin up energy among his base, disappearing from the campaign trail to travel out of state during the final days of the race.

If Doug Jones wins on Tuesday, I’ll be mentioning these moments. While admittedly odd to see a throng of folk waiting for selfies & autographs with an Alabama Democrat, he stayed til the last handshake last night in Birmingham & the third photo is of him in Montgomery yesterday. pic.twitter.com/XRyMYY43SW

The state chapter of the NAACP also quietly stepped up its outreach efforts. The group made 43,000 phone calls to African American voters, sent 160,000 text messages to both black and female voters, and sent an organizer to Alabama A&M University, a historically black college, to drive up student turnout, according to Alabama NAACP president Benard Simelton. That last-minute work, he says, will continue into 2018 in an effort to keep the momentum going into the congressional midterm elections and Alabama’s gubernatorial race.

Simelton believes that Jones also motivated voters by presenting them with a choice between moving forward and going backward. (Moore said the last time America was great was in the days of slavery.) “His message resonated with voters throughout the state that Alabama is moving forward and not going to elect someone to represent them in the US Senate that is going to take the state backwards, and that’s what Roy Moore was for,” Simelton says.

The NAACP was aided by black political organizations that have for decades played a leading role in mobilizing black voters in Alabama. These groups had been weakened by years of Republican dominance, and even some of their own members worried that they weren’t doing enough to bring black voters to the polls. But in the final weeks of the race, they seem to have stepped up their efforts to turn out black voters with radio ads and flyers at local establishments and churches. A coalition of African American groups also pushed a “Vote or Die” campaign to register and turn out black voters, highlighting the sometimes deadly consequences of policies like health care and criminal justice reform.

There were also serious efforts to register incarcerated people who, under a law passed this spring in Alabama, were eligible to vote. Though Alabama disenfranchises people convicted of a felony, the new law acknowledged that some low-level felonies did not warrant disenfranchisement, making thousands of Alabamians eligible. Alabama’s secretary of state, John Merrill, made virtually no effort to reach these people and inform them of their rights, but voting rights groups registered thousands of people who regained their rights under the new law. In a race that came down to about 20,000 votes, these newly registered voters may have played a key role.

Merrill, who is in charge of overseeing Alabama’s elections, has supported efforts that make it harder to vote and have had a disproportionate impact on African Americans. “As long as I’m secretary of state of Alabama, you’re going to have to show some initiative to become a registered voter in this state,” he said a year ago. On Tuesday, African American voters in Alabama showed that initiative, and then some.