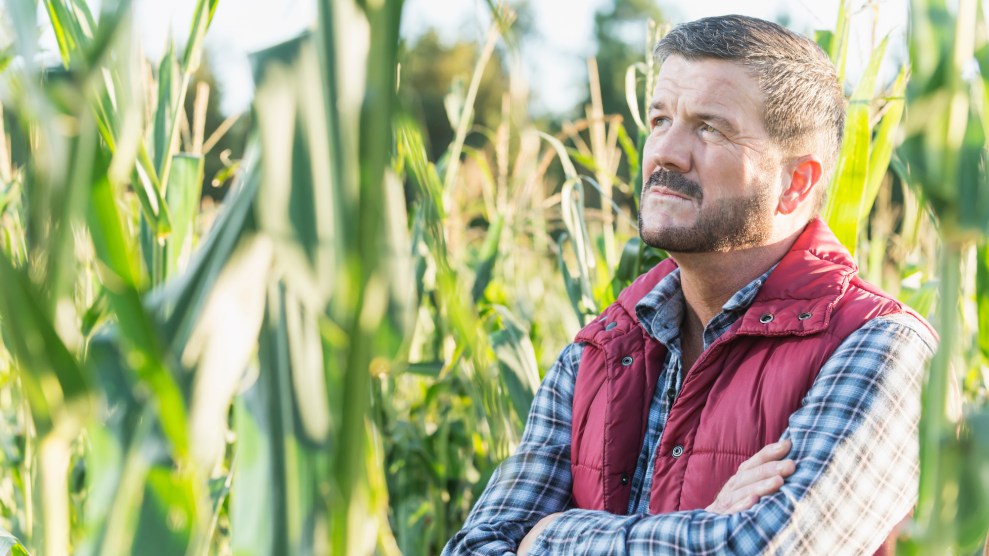 Update, Friday, December 15, 6:02 p.m: The GOP has released the final version of its tax bill. Read it here.

As a candidate, Donald Trump dominated the rural vote and polled very well among farmers. Will the tax overhaul he’s pushing hard in Congress finally reward farm country for its support?

Since taking office, Trump hasn’t exactly been a champion of farmers. He has imperiled their increasingly crucial export markets by rejecting trade deals and cracked down on the immigrants who supply the great bulk of farm labor. He even sided with massive poultry-processing companies over farmers by nixing US Department of Agriculture rules that gave farmers more legal recourse to defend themselves from unfair production contracts.

Trump’s Secretary of the US Department of Agriculture, former Georgia Gov. Sonny Perdue, insists the tax bill that recently emerged from House and Senate negotiations will deliver for the administration’s supporters down on the farm.

The tax cuts and reforms championed by @POTUS would make a tremendous Christmas present for Americans, including those in agriculture. Most family farms are small businesses, and they need relief to provide for their families and to reinvest in their own operations. https://t.co/mOntMWt9ap

As of Friday afternoon, the final bill negotiated between House and Senate GOP lawmakers has not been made public. Voting on it is expected early next week. In the meantime, here’s what we know about how the broad outlines affect farmers.

Only farms with around $1 million in annual sales are in high enough tax bracket to benefit from the lower rate. That amounts to about 4 percent of US farms.

• Some farmers can expect a tax cut. Many farms structured as sole proprietorships, partnerships and S corporations. Such entities are now taxed at the same rate as individuals, meaning income taxes as high as 39.6 percent. According to Agri-Pulse reporter Phil Brasher, the House-Senate compromise bill will effectively lower the top tax rate of these so-called pass-through entities to 29.6 percent—a significant cut.

• But only the largest operations. Ferd Hoefner, senior strategic advisor for the National Sustainable Agriculture Coalition, says only farms with around $1 million in annual sales are in a high enough tax bracket to benefit from the lower rate. That amounts to about 4 percent of US farms. Hoefner adds that the tax break for the largest farms provides yet more incentives for farmers to scale up.

• Heirs to farm estates valued at more than $5.5 million will win. Right now, estates valued at that level and higher are subject to an inheritance tax of 40 percent. Both the Senate and House bills would double the current exemption limit, meaning any inheritance valued at up to $11 million for individuals ($22 million for married couples) would not be taxed. However, vanishingly few farmers are wealthy enough to benefit from the estate-tax rollback—even fewer than will benefit from the pass-through tax cut. Under the current exemption level of $5.5 million, only 1.3 percent of farm estates needed to file an estate-tax return in 2016, and just 0.4 percent had to pay, according to the US Department of Agriculture.

• Farms involved in cooperatives may lose. Both the Senate and House tax bills would eliminate the so-called Section 199 deduction, which allows farm cooperatives to deduct a portion of their expenses, The Wall Street Journal reports. The National Council of Farmer Cooperatives bitterly opposes this rollback—the group claims the deductions saves farmers involved in co-ops $2 billion annually in tax liabilities. In November, the NCFC rallied more than 180 farm groups, most of them co-ops, to oppose the rollback of Section 199 deduction, a plea that both chambers promptly ignored.

Farm co-ops aren’t to be tangled with lightly. Around 80 percent of the US milk supply comes from farms involved in co-ops, representing more than $30 billion in business. According to the Journal piece, the deduction is worth about $100 annually per cow. “Supporters of the plan to repeal the deduction say that larger business tax cuts will more than make up for the loss of Section 199,” Land O’ Lakes, one of the largest dairy co-ops of all, recently stated in a press release. “But Land O’Lakes members know that’s not true for farmer cooperatives and their members.”

Such pressure may have worked, at least partially.  Agri-Pulse’s Phil Brasher reports that Sen. John Thune (R-S.D.,) managed to insert a provision into the Senate bill would allow co-ops to get the same tax break as the pass-through farm entities mentioned above, though it wouldn’t fully offset the loss of Section 199.

• The massive budget shortfall created by the bill will add to pressure to cut federal farm spending. The Congressional Budget Office calculated that the Senate version of the tax bill would likely add $1.4 trillion to federal budget deficits over the next decade. Zack Clark, the National Farmer Union’s director of government relations, says shortfalls will likely put farm subsidies and crop-insurance support.

And a showdown over those programs looms. Next year, Congress is due to renew the farm bill, the once-in-five-years legislation that funds farm safety net programs. Hoefner says after the tax bill “blows a big hole in the budget,” passing a farm bill next year will be near impossible. Indeed, the Heritage Foundation, a think-tank that’s highly influential among Congressional conservatives, hotly promotes the elimination of all these programs, and a ballooning deficit triggered by massive tax cuts could give their agenda traction on the Hill.

• Farmers relying on Obamacare could lose or pay more for health insurance. Both the House and Senate versions of the tax bill would eliminate the ACA’s individual mandate. According to the Congressional Budget Office, if that provision stays in the final bill, the “number of people with health insurance would decrease by 4 million in 2019 and 13 million in 2027.” Additionally, premiums for health policies bought on the individual market will rise 10 percent over baseline levels. That increase could affect a significant number of farmers—according to the USDA, 17.6 percent of farm households rely on the individual market for health insurance.

In a survey of  farmers 40 years old and younger released last month by the National Young Farmers Coalition, half of respondents said affordable health care is a “significant challenge,” and the ACA was “cited most often when we asked which program, policy, or institution was most helpful.” Farmers face one of the highest injury rates of any occupation, not only from machinery accidents like tractor overturns, but also from the “sprains, strains, and fatigue associated with the physical rigors of the job,” the coalition notes, making affordable health insurance critical.

So where does all of this leave farmers? The National Farmers Union opposes the tax overhaul, citing worries about what the hit to the budget might do to federal farm spending down the road.

But one major farm group has completely embraced the GOP tax overhaul: the American Farm Bureau Federation, a powerful lobbying organization with strong ties to agribusiness corporations. Patricia Wolff, the group’s senior director for Congressional relations, said the House and Senate bills on balance help farmers—they’ll benefit from the tax cuts for pass-through entities, she said, that will more than outweigh burdens related to changes to co-op deductions or health insurance.

She praised the bills for making headway toward a long-term Farm Bureau policy goal: easing the burden of the estate tax on farmers. I mentioned to her that the USDA is clear that very few farmers will benefit from the change. “We don’t dispute USDA’s numbers,” Wolff said. But the new exemption level will remove the “cloud hanging over” farm families worried about transferring their estates.