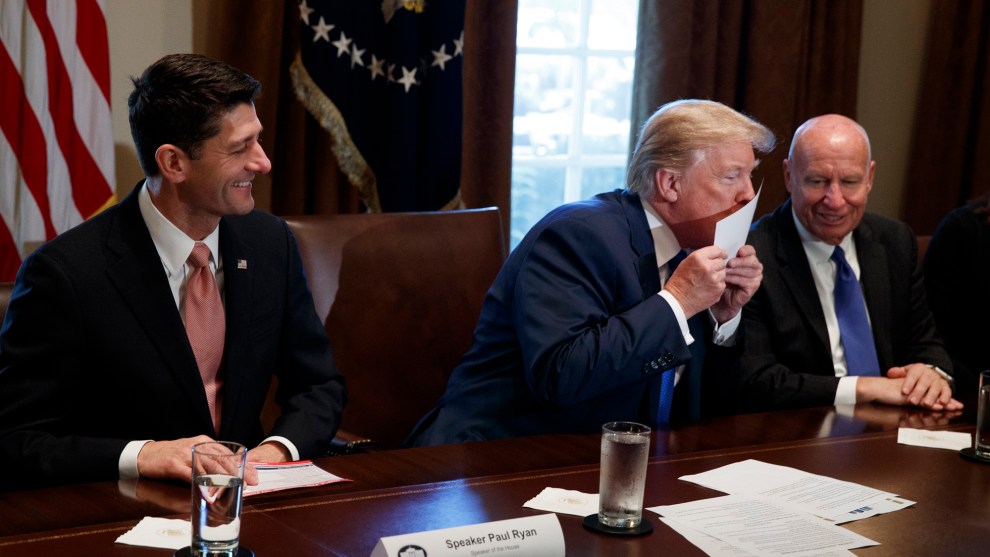 On Wednesday, the House of Representatives officially passed a $1.5 trillion tax cut that permanently helps corporations, while providing temporary benefits to all but the richest Americans. President Donald Trump is expected to quickly sign what he’s billed as his “big, beautiful Christmas present” to the American people.

The legislation, which passed the House and Senate without any Democratic votes, makes good on many long standing Republican promises: it drops the corporate tax rate from 35 percent to 21 percent, favors business income over salaries and wages, and makes foreign profits mostly tax-free. But it is not the simplification Republicans once touted. Most individual tax breaks are still in place, and new loopholes will keep tax lawyers busy for years to come.

In August, House Speaker Paul Ryan (R-Wis.) told business leaders that Republicans would “simplify things to the point that you can do your taxes on a form the size of a postcard.” It became such a common refrain that Republicans clarified that tax returns would not be actual postcards that strangers could read. Later in August, Trump listed simplification as his top tax priority. “That means getting rid of the loopholes and complexity that primarily benefit the wealthiest Americans and special interests,” he added.

On the campaign trail, Trump said he would close the carried interest loophole that allowed “hedge fund guys” to get “away with murder.” Congress ignored him. House Republicans did propose ending deductions for medical expenses, student loan interest, and adoption. But they kept all of them in the end. Marc Goldwein, the head of policy at the nonpartisan Committee for a Responsible Federal Budget, wrote that he was aware of only one tax expenditure, out of about 250, that the bill completely eliminates.

The greatest uncertainty comes from the fact that Republicans have essentially passed two bills by making the individual tax cuts expire in 2026. The first is a temporary tax cut—albeit a regressive one—for the vast majority of Americans. The other is a permanent corporate tax cut that almost exclusively benefits the rich.

With the individual cuts, the average middle-class household will get a $930 tax cut in next year, compared to $51,140 for those in the top 1 percent, according to the nonpartisan Tax Policy Center (TPC). Overall, about 80 percent of Americans will pay less taxes initially, while 5 percent will pay more and 15 percent will see no change.

The bill becomes even more lopsided when the individual cuts expire in 2026. TPC projects that the top 0.1 percent of Americans would get 60 percent of the benefits in 2027, which works out to nearly $150,000 a piece. The bottom 60 percent of Americans will pay about about $30 more per year in 2027. The increase comes from Republicans permanently adopting a new inflation measure, known as “chained CPI,” that gradually shifts Americans into higher tax brackets. The switch will raise Americans’ taxes by $133 billion over the next ten years, with much of that falling on middle-class taxpayers.

Republicans initially billed tax reform as a chance to make paying taxes easier, and that will be the case for many Americans. The bill replaces personal exemptions with a nearly doubled standard deduction, while also limiting popular tax breaks like the state and local deduction. Congress’ nonpartisan Joint Committee on Taxation projects that the share of taxpayers who itemize their returns will drop to about 5 percent as a result, down from 26 percent today. Simpler taxes, however, will often mean paying higher rates for those who make heavy use of deductions today—and that shift only lasts until 2026, when the tax code reverts back to the current standard deduction and personal exemption.

For corporations and the wealthiest Americans, the tax bill adds complexities that will make it easier to evade the Internal Revenue Service. Many top-earners will likely become corporations taxed at 21 percent instead of the top individual rate of 37 percent—down from 39.6 percent today. In theory, the company’s profits would be hit by the capital gains tax, but there are ways around that such as leaving the money to heirs. Either way, a recent study by leading tax lawyers concluded that there “is really no downside to this game, since the ‘double tax’ on both corporate and individual earnings is less than the top individual rate.”

The 95 percent of business owners whose profits are taxed as individual income will mostly be able to deduct 20 percent of their earnings. In making that change, Republicans are imposing an unprecedented penalty on wages and salaries. They are also inviting employees to turn themselves into a one-person business that is eligible for the 20 percent discount. Republicans made sure last week that real estate companies, like those owned by President Trump, will be eligible for the deduction.

Traditional corporations will be able to shift profits abroad to take advantage of Republicans’ decision to adopt a “territorial” tax model that only taxes domestic profits. There are some provisions that seek to curb profit-shifting. But as Mother Jones has written, they may end up having the opposite effect.

It will ultimately be up to a beleaguered IRS to set limits on the inevitable maneuvering. The agency has already seen its staff cut by 23 percent since 2010, and Trump has proposed further cuts. If it can’t stop the new tax schemes, the government may end up losing more revenue than expected. Most independent analyses project that the tax bill will cost at least $1 trillion over the next decade after taking into account economic growth. Republicans insist that their plan will pay for itself, despite the fact that no credible studies support that claim.

With tax cuts out of the way, House Speaker Paul Ryan (R-Wis.) has said that Republicans will turn to cutting funding for Medicare and other safety net programs. His argument for making those cuts is that America can’t sustain the debt levels that will almost certainly be made worse by the tax bill he championed.