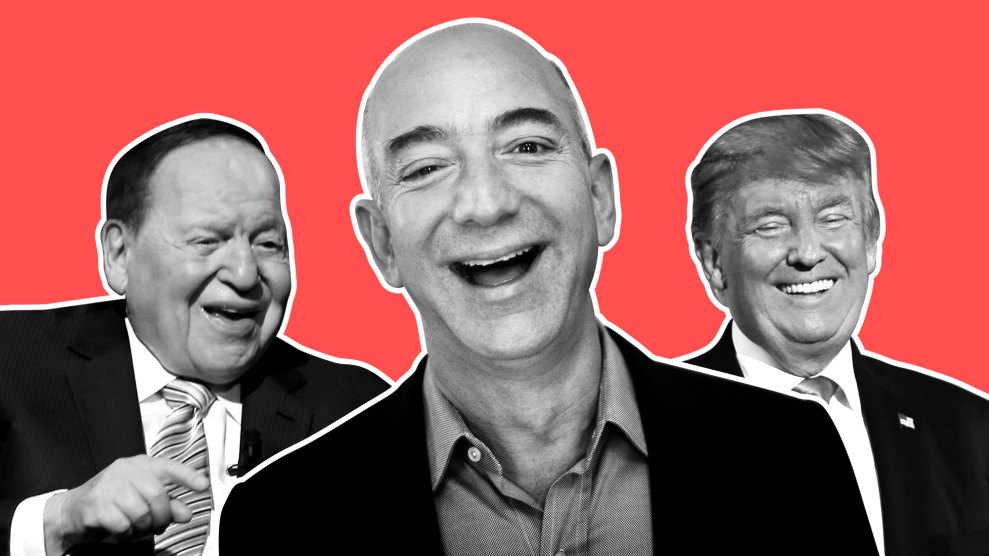 There are many ways in which the $1.4 trillion tax cut bill that Senate Republicans passed early Saturday morning—and the House’s version of the bill, which passed on November 16—disproportionately benefit America’s wealthiest citizens, and specifically the Trump family. One of the key reasons why is because of drastic changes to the estate tax—a tax on real estate and other assets passed down by someone after they die.

While we at Mother Jones and others have already reported on how much the Trump family stands to gain from this legislation, it’s not only the Trumps who will have fuller pockets after the bill becomes law. President Donald Trump, according to Forbes, is only (only!) the 248th richest American. His kids could save about $620 million if the estate tax is repealed, but the families of even richer Americans, a group that notably includes some of the biggest donors to the Republican Party, would save billions—each.

As it currently works, the first $5.5 million of an estate is exempt for an individual and, for a married couple, the first $11 million. For inheritances that exceed that value, owners are then taxed at a rate of 40 percent. Only an incredibly small number of Americans have to pay the estate tax each year: 2 in 1,000 estates (or 0.2 percent). Even so, the estate tax generates a significant amount of revenue: In 2016, the tax generated roughly $14 billion.

Both the House and Senate bills propose doubling exemptions to the estate tax, which would bring the total amount of an estate that can be passed down without taxes to $11 million for an individual and $22 million for a couple. The House bill, though, takes this one step further by proposing double exemptions until 2024, at which point the estate tax would be completely eliminated.

Mother Jones spoke with Americans for Tax Fairness, an advocacy group focused on progressive tax reform, about how these changes to the estate tax will benefit the ultra-wealthy, specifically the top 15 richest Americans, as ranked and reported by Forbes. If the exemptions are doubled, each estate would save $4.4 million for a couple, or $2.2 million for a single person. And if the tax is repealed, that’s where things get interesting: According to numbers crunched by Americans for Tax Fairness, in that scenario, the people who inherit money from this tiny group of people could potentially save more than a whopping $300 billion combined. And the families of GOP-megadonors Charles and David Koch could collectively save nearly $39 billion, while the heirs of Republican kingmaker and moneyman Sheldon Adelson could be looking at $14 billion.

This is not to say the Trump kids won’t benefit; they still will:

Bear in mind that these numbers are estimates and might not reflect exactly how much each estate will actually save. They are also calculated using a number of assumptions: that each person on the list is married (as marital status can and often does change), that each individual would pass on their entire estate, and that each person’s entire estate is actually taxable. (The amount a person passes on may be less than the full wealth listed here, based on how much they plan to donate before they die and other factors, like savvy estate planners.) “Any wealthy person is probably doing all sorts of things to avoid the estate tax” notes Jacob Leibenluft, a senior adviser at the Center on Budget and Policy Priorities. Finally, a few of the people on this list—Bill Gates, Warren Buffett, Mark Zuckerberg, Larry Ellison, and Michael Bloomberg—have signed “The Giving Pledge,” a promise to give away “more than half of their wealth to philanthropy or charitable causes during their lifetime or in their will,” which would alter how much of their estate would be subject to the estate tax. Since it’s not a binding pledge, we did not take it into consideration in these calculations.

This chart rather indicates the maximum amount each person’s estate could potentially save if the estate tax is repealed.

The differences between the House and Senate versions of this bill of course still have to be reconciled before Congress can send a final version of the bill to President Trump to sign. But either way, it’s clear this group, along with the Trump children, will benefit immensely. “What we see as a result of the estate tax cuts in both the House and Senate bills are, I think, measures that would contribute to growing inequality,” says Leibenluft. “We should be thinking about how we more robustly tax inherited wealth, not going backward.”