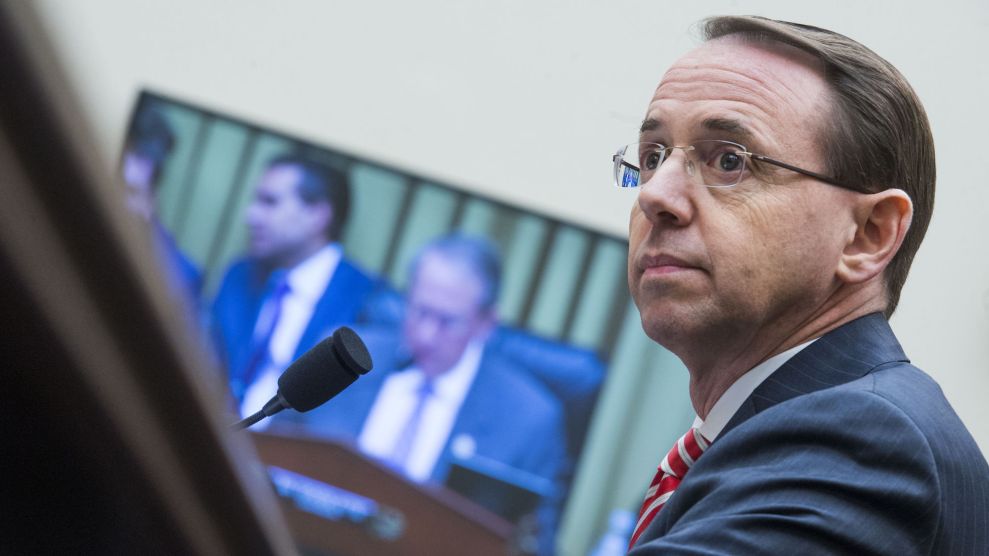 The Justice Department on Tuesday night allowed reporters who regularly cover the department to review hundreds of text messages from 2015 and 2016 between FBI officials Peter Strzok and Lisa Page, Business Insider reported, just prior to sharing the messages with Congress. According to The Washington Post, Strzok and Page, who is married, were involved in a romantic relationship at the time. Mueller removed Strzok, a top counterintelligence agent, from his team last summer after learning of the texts. Strzok also previously worked on the bureau’s investigation of Hillary Clinton’s use of a private email server while she was secretary of state. Page, an FBI lawyer, previously left Mueller’s team on her own accord.

The texts “are being used for propaganda purposes,” Sen. Feinstein told Mother Jones. “I think there’s an ongoing effort to malign both Bob Mueller and the work that that Special Counsel Office is doing.”

The text exchanges between the two included blunt opinions about the ongoing presidential campaign. Strzok questioned Trump’s intelligence and ability, calling him “awful,” an “idiot” and “an enormous douche.”

FBI regulations allow agents to express their personal opinions both privately and publicly on politics, but DOJ’s release of the material gave Republicans on the House Judiciary Committee a weapon to wield during an oversight hearing Wednesday with Deputy Attorney General Rod Rosenstein.

Numerous Republicans cited the text exchanges as evidence that Mueller’s team harbors political bias against Trump. “The public trust in this whole thing is gone,” Rep. Jim Jordan (R-Ohio) declared as he questioned Rosenstein. “It seems to me there are two things you can do: You can disband the Mueller special prosecutor, and you can do what we’ve all called for and appoint a second special counsel to look into this.”

But Sen. Dianne Feinstein, the top Democrat on the Senate Judiciary Committee, sees troubling partisanship at play. The texts “are being used for propaganda purposes,” she told Mother Jones. “I think there’s an ongoing effort to malign both Bob Mueller and the work that that Special Counsel Office is doing. They are grabbing at every single thing to try to demean him.”

Some congressional Republicans and pro-Trump pundits have aggressively attacked Mueller in recent weeks. But critics said DOJ’s release of the texts has now involved the agency that houses Mueller’s team in the partisan attack. Democrats also said the release of sensitive information that was part of an ongoing investigation was highly unusual, suggesting that it was done on behalf of President Donald Trump.

“I’m sure that Attorney General Sessions and the political elements of that department want to make their boss happy,” said Sen. Dick Durbin of Illinois, another senior Democratic member of the Judiciary Committee. “Creating publicity that might be useful against Mr. Mueller is high on their priority list.”

Congressional Democrats faulted Rosenstein Wednesday for the department’s handling of the texts. The exchanges were originally obtained—though it’s unclear specifically how—by the Inspector General’s office at DOJ, which is investigating the FBI’s handling of the probe into Clinton’s emails and other matters.

“Generally, evidence in investigations should be confidential,” said Sen. Richard Blumenthal, a former federal prosecutor. “I want to ask the deputy attorney general what his thinking was.”

Rosenstein would not say what, if any, role Attorney General Jeff Sessions played in the decision to release the texts.

Democrats presiding over the House hearing with Rosenstein also cried foul about the release of the texts, which they argued was part of a broad GOP effort to undermine Mueller. “None of this is about text messages,” Rep. Pramila Jayapal (D-Wash.) said during the session. “It is rather a full-fledged, irresponsible and very dangerous attempt on the other side to attack and undermine Robert Mueller’s investigation. ”

Rosenstein testified that he knew of the release and did not object to it, but declined to say who signed off on it. Nor would he say what, if any, role Attorney General Jeff Sessions—who recused himself from the Russia probe and matters related to the 2016 election—played in the decision to release the texts.

“We consulted with the inspector general to determine that he had no objection to releasing the material,” Rosenstein testified. “If he had, we would not have released it.”

Rosenstein also defended Mueller on Wednesday: The deputy attorney general said he has seen no evidence that would merit the special counsel’s dismissal, and he said he would not carry out an order to fire Mueller without such evidence.

Ian Prior, a DOJ spokesman, declined to detail how the department released the texts to reporters. But Prior said in a statement that the department ensures any information it releases is consistent with the law, including privacy laws.

Some reporters who cover DOJ tweeted on Wednesday that the Justice Department under President Obama also shared material sent to Congress, though it is unclear whether those releases included personal information that was part of an active investigation.