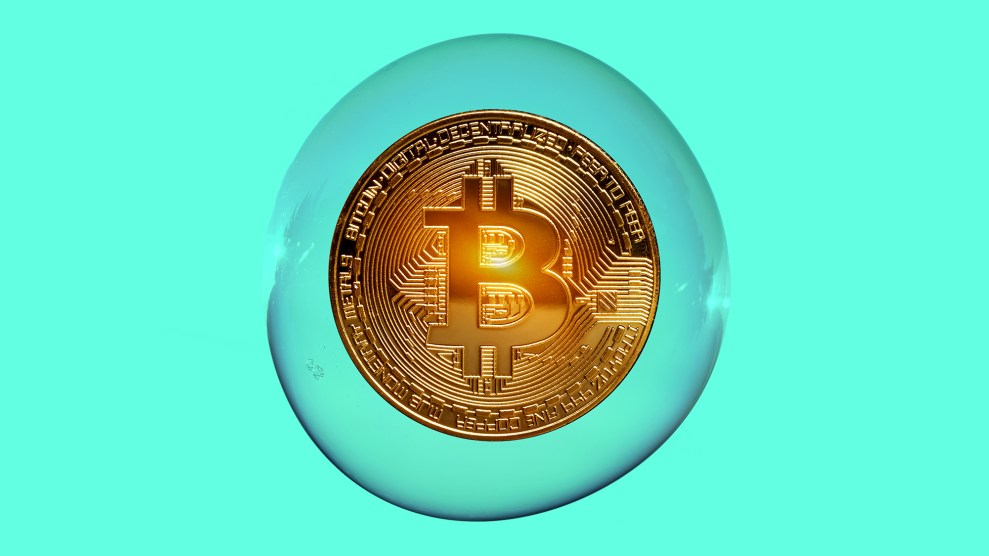 Since last fall, cryptocurrency—Bitcoin, Ethereum, Litecoin, etc.—has been making its way into the mainstream. No longer merely the arena of Silicon Valley geeks, it became table talk over Thanksgiving.

Some people mortgaged their homes to buy bitcoin. Businesses began talking about “blockchain” (the technology on which cryptocurrencies are based), and their stock prices soared in response. No matter if many of those companies, like Long Island Iced Tea Corp. and the parent company of Hooters, seemed to have nothing to do with blockchain.

The price of a single bitcoin peaked in late December at $20,089, according to CoinMarketCap, after starting the year at less than $1,000. That’s an increase of almost 2,000 percent—pretty clearly a bubble. “A lot of the market cap is just speculation,” says Christian Catalini, an MIT assistant professor and one of principal investigators of the MIT Digital Currencies Research Study. “It only has value because people believe it has value.”

In the current, booming economy, as manufacturers struggle to keep up with consumer demand, some observers are pondering the collateral damage that could take place if and when the cryptocurrency bubble bursts. Is this something we need to be worried about? And what about the long-term ramifications of digital currencies?

Pai-Ling Yin is an associate professor at the University of Southern California’s Marshall School of Business and director of its Technology Commercialization Initiative. While cryptocurrency investment has a “bubble element,” she says, that doesn’t mean blockchain has no value. To put it simply, blockchain is an anonymized, decentralized system for managing data and keeping accounts, and while it’s most commonly associated with cryptocurrencies, it has potentially far-reaching implications for the future direction of the internet. (This fabulous New York Times Magazine piece breaks it down.)

Does this mean investors are right to value bitcoin at $20,000? Not necessarily, Yin says. “It’s high for now. Let’s put it that way,” she says. “There could be a time where the valuation we see now does correspond to the value of what the technology is.”

As Yin notes, markets depend on the wisdom of crowds: Individual investors have knowledge of different parts of the economy, and together, in theory, they create a robust picture of a commodity’s value. But the price of a cryptocurrency is different from the price of a bushel of corn. Too many investors have too little information, making the value incredibly volatile.

The price of bitcoin, according to CoinMarketCap, swung back and forth between $13,000 and nearly $18,000 throughout the first half of January. Then, in one 24-hour period, from a Monday to a Tuesday, its value tumbled 28 percent. By late Tuesday afternoon, it was swinging back up.

In December, the financial company CME and the Chicago Board of Options Exchange both launched trading in bitcoin futures, a move Yin says could “mellow out” bitcoin’s volatility. But it’s still too early to tell. The beauty and potential downfall of bitcoin and its imitators is that no one owns it—or, in bitcoin’s case, who even created it. Bitcoin started out as a white paper by “Satoshi Nakamoto,” who is not a real person.

“I’m certainly not going to make a claim that economics are fundamentally changing right now, but…”

The aspect of mystery also makes cryptocurrencies very difficult to regulate. But that could be exciting, says Christopher “C.C.” Pearce, a 32-year-old MBA candidate at USC’s Marshall school and an early investor in bitcoin.

“You could potentially bring unbanked populations to where they’re able to secure wealth,” Pearce says. Plus, he contends that using cryptocurrency is a way to get around corrupt institutions, including banks and governments: “Drives me crazy when you watch a country like Venezuela that’s going through hyperinflation.”

Pearce, who frequently advises potential investors, is a dreamer. He enjoys thinking about hypothetical scenarios, like a government issuing a national cryptocurrency, or international traders using bitcoin as a standard measure of value. However, he stops himself before making sweeping judgments about the future of trade.

“With the dot-com bubble, they were saying how the fundamentals of economics have changed, and in hindsight, we know that’s not true,” Pearce says. “I’m certainly not going to make a claim that economics are fundamentally changing right now, but there’s something very, very powerful about knowing that there is an ultimately finite supply of these cryptocurrencies that exist and that they are inherently deflationary.” He’s referring to the finite supply of bitcoin—which has a hard cap of 21 million coins, not all of which are yet in the market.

Benjamin Graham, an assistant professor at USC and co-founder and principal investigator of its Security and Political Economy Lab, agrees that cryptocurrencies will be difficult to regulate, but he’s a little more skeptical about their mainstream future. “It’s hard for me to imagine a world in which cryptocurrencies get widely adopted, but if they do, it would really change how policymakers, central banks, legislatures, and executives work,” he says.

As it turns out, the market is afraid of regulation. That 28 percent price drop in January? It was driven, at least in part, by news that South Korea was considering a ban on cryptocurrency trading. The Chinese government  reportedly plans to block domestic access to platforms that enable centralized cryptocurrency trading.

Graham argues that it’s important to consider the economic relationships between governments and their citizens. It’s well nigh impossible for a government to know how many people own bitcoin, how much they own, and—by extension—how a collapse would affect that nation’s well-being. “Governments don’t know whether their economies are exposed,” Graham says.

But he’s not worried about a cryptocrash wreaking havoc just yet. “Right now, cryptocurrencies are tiny in their overall value, so they don’t pose much of a threat” to traditional economies, he says.

Yin totally concurs. “I think there are many other reasons the economy might crash,” she says. “Cryptocurrency’s not going to be it.”