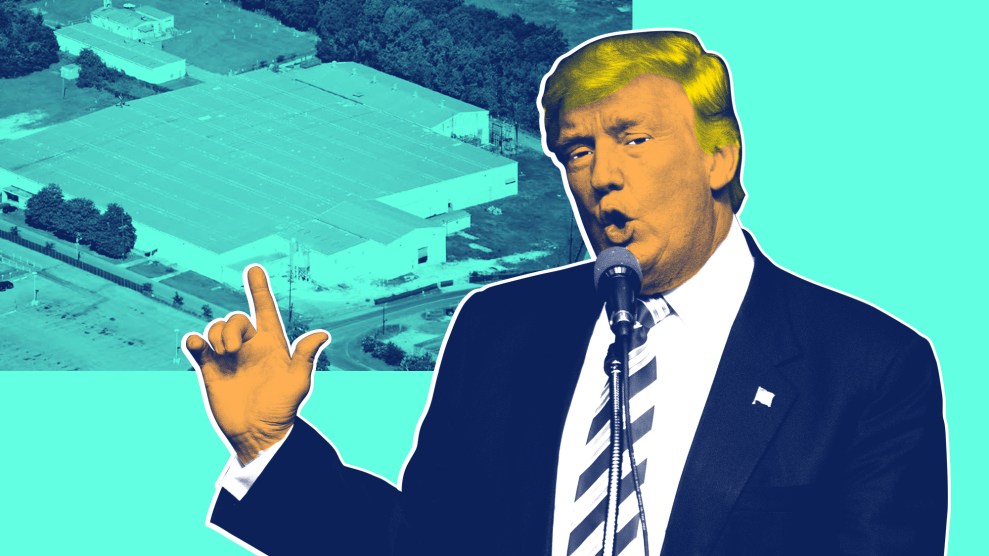 Anyone in the market for a polluted South Carolina warehouse that’s mired in a messy lawsuit? Did we mention it has a leaky roof?

President Donald Trump’s company, known for its glitzy real estate developments, is trying to find a buyer for just such a property, located in a North Charleston industrial park. The 157,000-square-foot warehouse is a vestige of one of Donald Trump Jr.’s biggest business blunders, a deal his father had to bail him out of four years ago and one that is still creating headaches for the Trump Organization.

In 2010, Trump Jr. and a few business partners launched a concrete company, Titan Atlas Manufacturing, and purchased the warehouse, once owned by Lockheed Martin, as the headquarters for their new venture. The company went bust after four years, leaving Trump Jr. holding a $3.65 million Deutsche Bank loan, secured by the warehouse. That was when the elder Trump stepped in, creating a new company, DB Pace Acquisition, which he used to buy the loan from the German bank (which was also Donald Trump’s biggest lender). Trump then foreclosed on the loan, taking the building into his own possession and out of the hands of his son’s failed concrete business. On his most recent personal financial disclosure, Trump listed DB Pace Acquisition as worth between $1 million and $5 million.

The property has caused the Trump Organization nothing but trouble. After the concrete business went under in 2014, Trump Jr. leased the vacant site to the French conglomerate Saint-Gobain, which used it to store roofing materials. In 2016, the French company sued the Trumps for $4.5 million, alleging that the building’s roof was in such poor shape that its merchandise was destroyed by water damage from a 2015 hurricane. According to the lawsuit, the company had previously and repeatedly asked Trump Jr. and Trump family lawyer Michael Cohen, who helped to manage the property, to fix the roof. Citing the steep cost of the repairs, Trump Jr. and Cohen allegedly said they would only do so if the French company agreed to renew its lease. Then the hurricane hit.

The Trump Organization is eager to get rid of the property, and it indicated in an October 2017 court filing that it was open to settling the suit with Saint-Gobain if it could find a buyer for the warehouse. “The sale of this property is critical to the resolution of the case as the sale will provide necessary liquid assets to be used for settlement purposes,” Trump’s attorneys wrote.

There are some problems. The warehouse, among its other flaws, is environmentally contaminated. There’s no indication that the contamination was caused by Titan Atlas or DB Pace Acquisition, but both companies could face some liability for the cost of the cleanup. Trump applied to a South Carolina state program that facilitates the cleanup of industrial properties and removes the current owner’s liability for a previous owner’s activity. But last March, the state rejected the Trump application, because an applicant must prove it had no connection to the property’s previous owner and the Trump Organization did not submit the necessary paperwork.

How much is Trump asking for his leaky, polluted warehouse? The property is listed for lease with a commercial real estate company, but the listing agent handling the property did not respond to a request for comment from Mother Jones, nor did an attorney for the president’s company.

At one point, the Trump Organization did try to interest the federal government in this facility.

In October 2016, when Trump was a month away from winning the presidency, Michael Cohen, according to emails released via a Freedom of Information Act request, told an employee of the Government Services Administration that Trump wanted to offer the Federal Emergency Management Agency the contaminated warehouse for use during a hurricane recovery. But the offer went nowhere—this is one disaster FEMA never had to deal with.