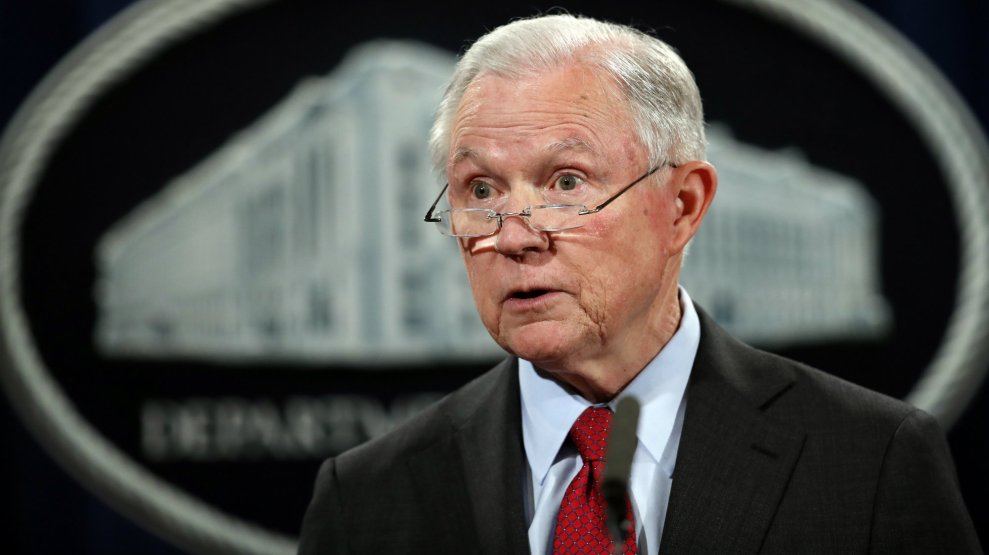 Attorney General Jeff Sessions on Thursday reversed an Obama-era policy that discouraged federal prosecution of drug crimes in states that have legalized marijuana for medical or recreational use—a policy that set the stage for weed to develop into a legal multibillion-dollar industry.

The revised policy could potentially open the door to federal crackdowns in dozens of states. The DOJ’s announcement came only days after California became the sixth state to start issuing licenses for the sale of recreational pot, and the eighth to legalize its use. (DC also allows sales, and Massachusetts is expected to start issuing licenses in July.) Twenty-nine states have legalized the sale and use of cannabis for medical purposes.

The DOJ reversal, first reported by the Associated Press, appears to break with a Trump campaign promise to respect states’ decision on pot legalization. It drew swift condemnation from advocates of criminal justice reform and drug policy reform.

“Those of us who are veterans of the War on Drugs know that cracking down on minor, non-violent drug crimes will not solve our country’s addiction crisis,” Ronal Serpas, chairman of Law Enforcement Leaders to Reduce Crime and Incarceration, a law enforcement group focused on smarter criminal justice policy, said in a statement. “We need the federal government to focus law enforcement efforts on fighting violent crime—the most serious threat to our public safety—rather than diverting limited prosecutorial resources to smaller, non-violent offenses.”

Democratic lawmakers also took to Twitter to denounce decision, as did Republicans in some legal-pot states.

Dear Attorney General Jeff Sessions and @TheJusticeDept: Let me give you a list of things more important for federal prosecutors and federal law enforcement to pursue other than marijuana:

Our country is in the midst of an opioid crisis and the AG is going to divert resources to cracking down on medical marijuana? This is either willfully ignorant or cowing to corporate greed on behalf of pharma special interest profits.

.@SenCoryGardner on AG Sessions’ memo on marijuana policy: “We were told that states rights would be protected—and not just by the Attorney General…we were told that by then-candidate Donald Trump.” https://t.co/CFdzczE0fE pic.twitter.com/QCbqhaUQnn

The Obama administration announced in 2013 that it would generally refrain from interfering with states that sought to legalize the sale and use of marijuana—still illegal under federal law—so long as those states implemented regulatory systems that kept the drug out of the hand of gangs and children, and helped prevent it from migrating to states where it is prohibited.

In a briefing with reporters on Thursday, DOJ officials refused to answer questions about whether federal prosecutors would begin cracking down on marijuana dispensaries. The new guidance frees up prosecutors to use all “the necessary tools to disrupt criminal organizations, tackle the growing drug crisis, and thwart violent crime across our country,” according to the attorney general’s statement.

Sessions, who was formerly one of the Senate’s fiercest opponents of criminal justice reform, has repeatedly opposed pot legalization, even going so far as to compare cannabis to heroin. He has also linked recent increases in violent crime to the drug trade—and illegal immigration—although experts say there is little evidence to support either claim.