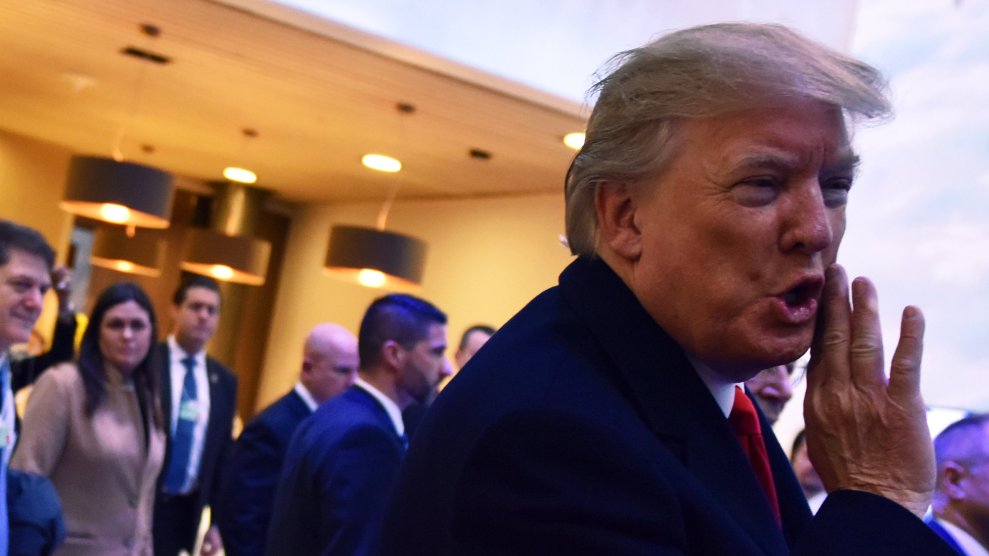 Donald Trump on Friday morning didn’t really deny a blockbuster New York Times report that last June he had ordered the firing of Special Counsel Robert Mueller but had backed off when White House Counsel Donald McGahn threatened to resign in protest.

“Fake news. Fake news. Typical New York Times. Fake stories,” the president, who is in Davos, Switzerland, told reporters when asked about the story. Trump did not address the specific allegations in the report.

But that was good enough for the Associated Press to declare in a headline, “Trump denies Times report that he ordered Mueller fired.” CNN, ABC, and the Daily Caller all announced that Trump had denied the Times’ findings. (Mother Jones wrote that that Fox News hosts “parroted Trump’s denial of the report on Friday as ‘fake news.’”)

But here’s the problem. Trump didn’t specifically deny that he had ordered Mueller’s firing, the main contention of the Times story. Trump merely repeated a phrase, “fake news,” to which he has applied a range of meanings.

In an October story, Politifact detailed some of the ways Trump uses “fake news”:

Since the beginning of 2017, President Trump has invoked the phrase “fake news” on 153 separate occasions. Virtually every instance has been in response to critical news coverage.

Trump has used it when he felt he wasn’t getting enough credit for positive actions, such as helping Puerto Rico recover from Hurricane Maria. “We have done a great job with the almost impossible situation in Puerto Rico. Outside of the Fake News or politically motivated ingrates,” he said on Twitter.

He’s used the term after news channels simply reported what he said, such as his comments about white supremacists in Charlottesville, Va. “The only people giving a platform to these hate groups is the media itself, and the fake news,” Trump said at a campaign-style rally in Phoenix.

And he’s used the term [repeatedly] when news organizations have covered basic facts about the government’s own investigations into Russia’s influence on the 2016 election. “It is the same Fake News Media that said there is ‘no path to victory for Trump’ that is now pushing the phony Russia story. A total scam!” Trump said on Twitter.

To be sure, Trump has at times used the term to talk about articles he actually claims are inaccurate. But his promiscuous use of the phrase leaves it with no real meaning. As Steve Coll wrote last month in the New Yorker, Trump’s “definition of ‘fake news’ is credible reporting that he doesn’t like.”

When Trump calls the Times report “fake news,” he might be saying he thinks it treated his concerns about Mueller’s alleged conflicts of interest too dismissively, or that he simply doesn’t like the story. His response is a classic “non-denial denial.” That’s a term for when the subject of a story issues a dismissive statement to the media without actually denying the report.

Trump has also described as “fake news” articles that rely on unnamed sources, as the Times piece does. This is a common media criticism. The idea is that readers should be skeptical of stories with unnamed sources, since others cannot easily verify the accuracy of their claims. But a gripe that an article uses anonymous sources is not an assertion that the article is false.

Indeed, the Times report was quickly confirmed by the Washington Post, the Wall Street Journal, Politico and others. Even Fox News confirmed it. The White House and McGahn have not disputed it. Trump’s friend Christopher Ruddy, the owner of Newsmax, a conservative publication, also told reporters last June that Trump was considering firing Mueller. The story seems solid.

Trump may has avoided a direct denial of the story because an overt lie about an effort to fire the head of an investigation into him could be used by Mueller to demonstrate that Trump had intent to obstruct justice. Lying about the attempt could show that Trump was aware his actions were improper.

Yet Trump also obviously wanted to downplay the Times story. By labeling the scoop “fake news,” Trump obfuscated while giving his supporters something to rally behind. When publications describe Trump’s non-denial as a denial, they are unwittingly assisting him in this effort.