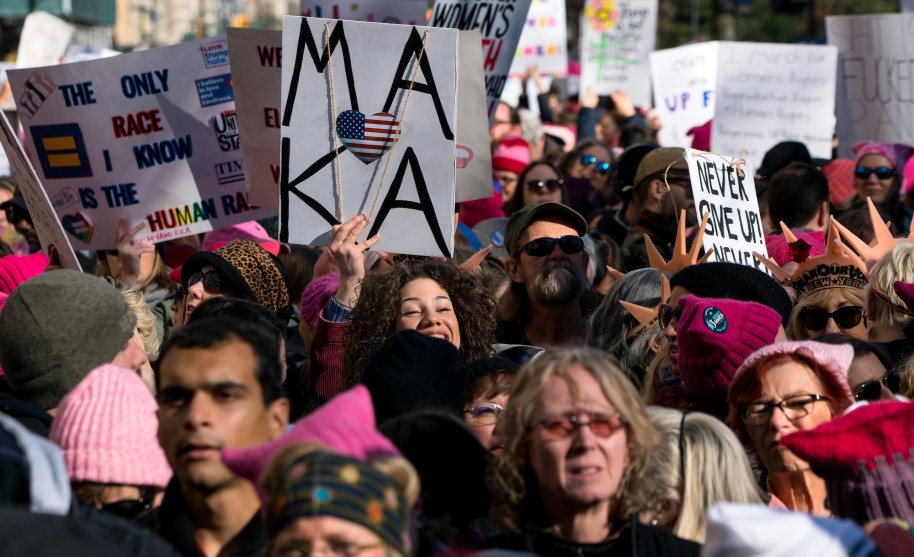 One year after millions of people took to the streets to protest the inauguration of President Donald Trump, activists this weekend are gathering to continue the momentum sparked by the historic Women’s March with new rallies in New York, Washington D.C., Los Angeles, and beyond.

The protests’ return coincides with the first anniversary of Trump’s inauguration and a government shutdown, after a Republican controlled Congress and White House failed to hammer out a funding bill that includes a provision to protect nearly 700,000 undocumented immigrants known as Dreamers. This weekend, protesters are marching in solidarity with DACA recipients, demanding the federal government restore protections to shield them from the threat of deportation.

The movement known as #MeToo, which highlights sexual harassment and gender inequality in the workplace, has already been a highly visible force this weekend.

You can find rolling coverage of some of the best moments from this weekend’s marches below. We’ll also provide updates on the government shutdown, along with any reactions from the White House:

#Sacramento was #woke this morning for the #WomensMarch!

Great shot from the dome of the State Capitol. #womensmarch2018 #WomensMarchSac pic.twitter.com/sMpVghLW6b

Proud of my city #Vancouver & every city that was part of #WomensMarch.
Every person who showed up was for more than themselves today.
Sad I wasn't able to be there but was working on covering @CBCOlympics
We were smiling in the mountains & appreciate all those who marched for us pic.twitter.com/SmeACLfqXj

Mother Jones editors James West and Samantha Michaels with images from the marches in New York and Oakland:

NYC streets are absolutely jammed with thousands of people–side-streets to the main march gridlocked with folks trying to join. pic.twitter.com/jvoBTWVeTa

A sea of bodies and pink. This big cluster near Columbus Circle finally moving after about an hour of chanting and merriment. pic.twitter.com/4lsqmfdvFU

1:53 p.m. EST: Trump weighed in on the nationwide marches with a trolling tweet that casted the demonstrations as a celebration of his administration’s achievements.

Beautiful weather all over our great country, a perfect day for all Women to March. Get out there now to celebrate the historic milestones and unprecedented economic success and wealth creation that has taken place over the last 12 months. Lowest female unemployment in 18 years!

In turn, many, including several Democratic lawmakers, poured in on social media to mock the president.

Who wants to tell him? https://t.co/ZIWZvVkMCO

Instead of working with us to reopen the government and finalize a long-term bipartisan budget deal, President Trump is spending his day crassly heckling women on Twitter. https://t.co/GXkwPj4WAR

Sen. Chuck Schumer held a press conference to provide updates on the shutdown. He described negotiations with the White House as “negotiating with Jello.”

“It’s next to impossible,” Schumer said. “As soon as you take one step forward, the hard right forces the president three steps back.”

Sen. Chuck Schumer: "Negotiating with this White House is like negotiating with Jell-O. It's next to impossible." https://t.co/0HOo7WNfGx pic.twitter.com/wTVzSvX2wh

We want to know if the energy generated from last year’s march inspired you to do something beyond that one day. What did it change for you? Did you make a pledge and keep it? Tell us your story here.

Here’s what our readers have told us so far:

“I was afraid it would all go away, and that people would go back to their lives, and it really hasn’t.”

“I never would have imagined this level of engagement in politics two years ago. Now, it’s just daily.”

Currently at the #WomensMarch rally. pic.twitter.com/gSE2HjkBzz

Here are some extraordinary statistics tracking the number of women lobbying Congress, running for office, and speaking out against Trump since last year’s Women’s March.

“Tweet others as you wish to be tweeted”- some of the scene here in Palm Beach as protestors gather to march to Mar-a-Lago pic.twitter.com/PrZ7o3QgXk

quite the chyron for the president's 1st anniversary pic.twitter.com/g7iV14shJr

Little girl dressed up as Rosie the Riveter cheering her friend hitting a trump piñata sums up 2018. #WomensMarchNYC pic.twitter.com/M2LDa3Wh0k