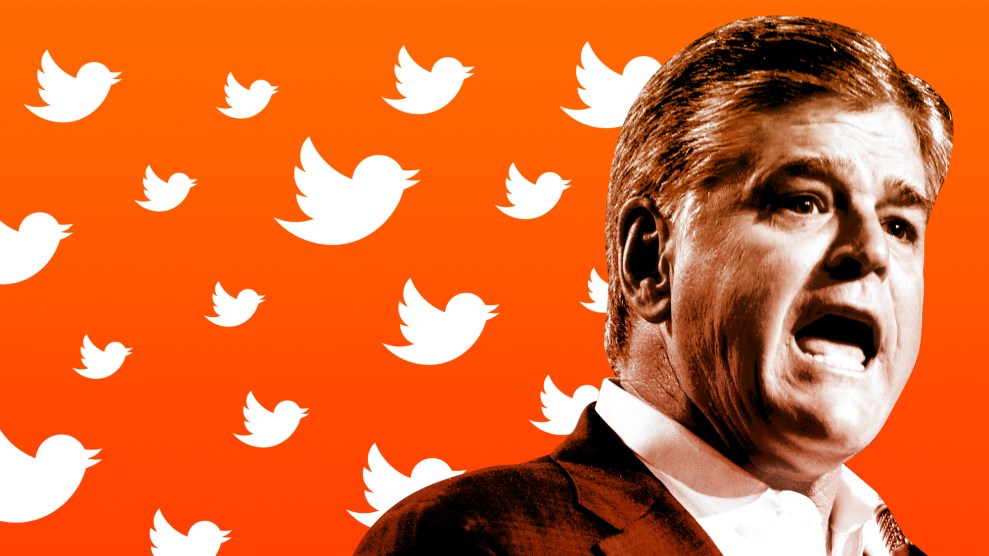 Soon after Donald Trump’s former national security adviser Michael Flynn agreed to a plea deal with special counsel Robert Mueller on Dec. 1, Kremlin-linked trolls began ramping up their social-media attacks on the Russia investigation. They tweeted out dozens of articles from Fox News and far-right outlets aimed at undermining the credibility of the FBI, the Department of Justice, and the so-called deep state. And Vladimir Putin’s trolls would soon have a new vein of material to exploit.

That day, Hannity’s website ranked among the top 10 shared by the network of Twitter accounts linked to Russian influence campaigns and tracked by the nonpartisan Alliance for Securing Democracy on its national security project, the Hamilton 68 dashboard. Hannity content had not registered much previously—but since December 20, links from Hannity’s site have appeared frequently on the dashboard, often ranking among the top 10. “It’s now up there with other top most-shared domains,” says Bret Schafer, an analyst who monitors the dashboard for the Alliance.

Another storm kicked up last week when House Republicans began calling for the release of a memo produced by Rep. Devin Nunes, purportedly alleging surveillance abuses by the FBI and the Justice Department in the Trump-Russia investigation. On January 18, Hannity inveighed against Mueller specifically: “I have a message tonight for the special counsel, Robert Mueller,” he said at the outset of his Fox News prime time report on the memo. “Your witch hunt is now over. Time to close the doors.” By the end of the following day, the hashtag #releasethememo had been tweeted about 3,700 times in 48 hours by the 600 accounts monitored on Hamilton 68, boosted in part by a tweet from WikiLeaks offering a reward for the memo. Hannity also posted “#releasethememo” to the top of Hannity.com.

The Washington Post reported Tuesday that House Freedom Caucus leaders including Rep. Jordan recently sought Trump’s blessing for their campaign to release the memo. While the White House said Trump didn’t endorse the release of the memo, GOP lawmakers believed the president signaled that he strongly favored it. “I think it’s fair to infer with about a 99 percent probability that since it helps the president so much, that he would be happy if the public knows about it,” Alabama Rep. Mo Brooks told the Post.

Attacking the US law enforcement system may be in the short-term interest of a few right-wing politicians, says a former CIA official, but “they are helping our enemies and risk doing long-term damage to our democracy.”

On Tuesday, as #releasethememo sat among the top hashtags of the Hamilton trending list for the fifth day in a row, senior congressional Democrats called on Twitter and Facebook executives Jack Dorsey and Mark Zuckerberg to investigate the extent of the Russian influence campaign happening on their platforms in real time. “If these reports are accurate, we are witnessing an ongoing attack by the Russian government through Kremlin-linked social media actors directly acting to intervene and influence our democratic process,” Sen. Dianne Feinstein and Rep. Adam Schiff wrote to the tech leaders.

Former senior CIA official John Sipher says the smear campaign by Fox News and Trump’s allies in the House plays directly into Kremlin hands. “A weak FBI is in the Russian interest. They will use all the tools at their disposal to pile on and amplify the negative messages,” he told Mother Jones. “At the very same time that we should be coming together to defend ourselves, partisan supporters of the president are attacking the institutions that are protecting us. There needs to be a level of trust and awareness that [FBI and DOJ] are working on behalf of the people, and are not partisan hacks. While it might be in the immediate, short-term interest of a few right-wing politicians, they are helping our enemies and risk doing long-term damage to our democracy.”

Since the Hamilton dashboard launched last August, Fox News in general has often appeared on the trolls’ most-shared list. “Anecdotally, Fox is the go-to news source for breaking news,” Schafer says. But the more recent Hannity links seized upon by the Russian trolls echo a deceptive style seen with content from far-right conspiracy sites like Gateway Pundit and True Pundit. One recent example: a Hannity.com link headlined, “KNIVES OUT: Elizabeth Warren GOES AFTER Oprah Winfrey over 2020 run”—leading to a story quoting Warren as praising Winfrey for a “fabulous speech.” Another Hannity link shared by the trolls recently carried a headline claiming “Fusion GPS says FBI likely funded ‘Trump dossier’ author” and crediting Breitbart News. The Hannity links shared this week continued to demand the release of the Nunes memo and hammered at the freshest conspiracy theory, the alleged disappearance of FBI officials’ allegedly biased text messages.

Hannity did not respond to a request for comment about his rising popularity among the network of Russian-linked accounts.

“Kremlin-oriented trolls have used #releasethememo to promote divisiveness, distrust, and to negatively influence our public discourse.”

“Because Russian accounts promote a certain political position is not evidence of coordination” between the trolls and Trump partisans advocating for the release of the memo, Schafer notes. The key takeaway with #releasethememo, he says, “is that Kremlin-oriented trolls have used that hashtag to promote divisiveness, distrust, and to negatively influence our public discourse.”

Former FBI special agent Clint Watts pointed out Tuesday that attacks on the FBI have been increasing as the Russian investigation continues to accelerate. After reports Tuesday that Attorney General Jeff Sessions and James Comey had been interviewed by Mueller’s team, Watts tweeted: “Interviews are getting closer to the top & suddenly attacks by @GOP on FBI have increased.”

The 600 Kremlin-linked live Twitter accounts that Hamilton 68 monitors are separate from the 2,752 accounts Twitter revealed last fall that were operated before the 2016 presidential election by the Russian Internet Research Agency. Last Friday, Twitter updated that number to 3,814 IRA-linked accounts—plus more than 50,000 automated bot accounts linked to the Russian government. Twitter says it is sending emails to 677,000 users to notify them that they interacted with the Russian accounts.

Republican Sen. John Cornyn, who has been involved in the Trump-Russia investigation via the Judiciary Committee, called on Mueller in December to “clean house” of partisans. Cornyn tweeted Saturday that Twitter had notified him that he had shared content from or followed known Russian accounts.

“Finally social media is waking up to manipulation of public opinion by our adversaries,” he wrote. But he seemed to downplay the role of Congress: “All of us need to step up to meet this challenge,” he said, “especially the Press.”